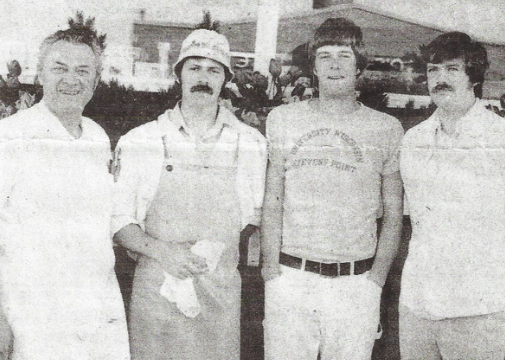 Fritz and Janice Ripp bought Al Hopp’s grocery store, meat market and slaughterhouse at 246 N. 4th Ave. in Sturgeon Bay in 1947. Their daughter, Mary Lou, was just a toddler at the time, but the five Ripp boys – Dave, Tony, Joe, Dan and Tim – were soon old enough to start helping out in the business.

The slaughterhouse was distinctive in downtown Sturgeon Bay.

“We butchered cows, pigs, chickens, rabbits,” Tony said, “and even buffalo from our cousin Mike Tort’s farm in Maplewood. Of course, deer, too; and Howie Larson, the chief of police, would come in to help out in deer season when it was really busy.”

Sometimes a cow or pig escaped and had to be chased. Mary Lou recalled that her friends always made sure to tell her when they’d seen her dad running down the street. (A number of longtime residents in that part of town also have memories of this excitement.)

Sausage was a big thing at Ripp’s. Earl Kracht, the establishment’s sausage maker for decades, turned out bologna, summer sausage and 12 kinds of bratwurst, including cherry, liver, potato and wild rice.

“We always did a lot of business with the steamships that came into Sturgeon Bay in the fall and left in the spring,” Tony said. “And we also sold a lot of fresh soup and did catering.”

Both Lynette Harris and Marsha Nelson remember the frozen-food lockers Ripp’s had available to rent by the month or year for families that didn’t have home freezers.

Roy’s Drive-In next door was one of Ripp’s best customers. Tony remembered using the hamburger press to make 10 patties from a pound and selling them to Roy for a nickel each. Roy paid them every Monday, always bringing a paper bag stuffed with $1 bills.  “Yes,” Mary Lou Ripp Norton said, “and I had to count them all!” Gerald Wagner, a longtime friend of Fritz, recalled that Roy had a key to the market’s back door so that he could get more hamburger if he ran out when the store was closed.

“Roy was the first in town to have soft-serve ice cream,” Mary Lou said. “A cone was five cents. On Saturday afternoons in the summer, my dad and I would cut a cantaloupe in half and take out the seeds; then I’d take the halves to Roy’s and fill them with ice cream.”

Employees whom Tony and Mary Lou remember were Helen Schaefer, Rita Dejardin and Myrtle Wilke. David Ripp worked in the store until about 1983, when he bought the Nightingale Restaurant.

In 1988, Fritz and Janice sold the business to Tony and his wife, Bonnie. By this time, there were larger chain stores in town that featured groceries. Bonnie was a crafter – “couldn’t ever see the top of the kitchen table at home,” Tony recalled – so the grocery area at Ripp’s was transformed into a craft store that Bonnie managed.

Earl Kracht, the sausage maker, continued to work for Tony until 1998, when the building was sold to Baylake Bank and remodeled for office space. For the past 18 years, Tony has worked two days a week as a meat cutter at Pick ’n Save.