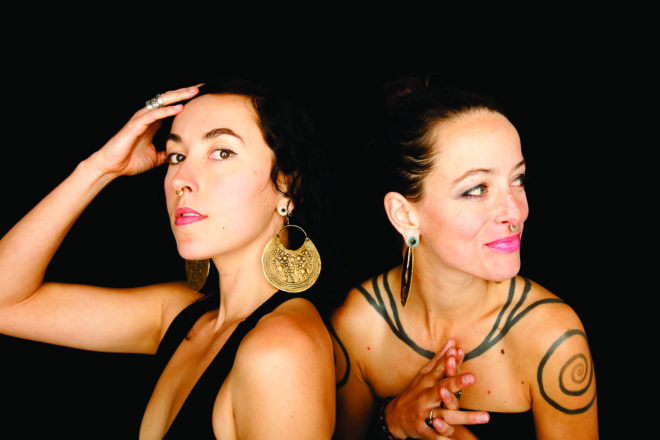 Strong vocal harmonies weaved in between banjo riffs, swells from the fiddle and beats from the West African drum. Rising Appalachian’s performance was well-oiled and comfortable, with nods to influences from Appalachia, Ireland, New Orleans and West Africa.

Leah and Chloe Smith were back on the Door Community Auditorium (DCA) stage again, one they remembered sharing a few times before. They remembered the acoustics of the room, and were excited to share their new album, Leylines, in the space.

The sisters were decked out in earthly tones, stiff-brimmed hats, braids, large-hoop earrings and septum piercings. Their look seemed like a reflection of their personalities: warm, relaxed, open.

The two shared their Door County adventures before starting their first song. In an earlier interview, Leah Smith told me they enjoy coming a day or two ahead of the show to experience whatever town they’re in.

Being from Atlanta, Georgia, Chloe wanted to test out the Northern waters at the beach. She said she dipped a toe in and that was it for that adventure; it was way too cold, she laughed. Leah enjoyed looking at the county’s trademark cherry trees.

Their first song, “I Believe in Being Ready,” was haunting. It was just the two voices hanging above Leah’s Irish drum, all of which echoed throughout the auditorium.

Rising Appalachia’s other two longtime members, David Brown on stand-up bass and baritone guitar, and Biko Casini on world percussion and n’goni, joined in for the next tune, “Novels of Acquaintance.”

I was instantly mesmerized by Casini’s drum – it looked like an enlarged, circular gourd that he was hitting with both palms, arms sort of rhythmically flailing up and down to hit each note. I could hear the hip-hop influences on that first song, that come from the sisters growing up in urban Atlanta.

Leah joked that their music came from growing up trying to get into clubs and listening to ’90s hip-hop music like Outkast, and then going to fiddle camps on the weekends and catching bullfrogs.

Throughout the show, the crowd didn’t behave like you would expect them to at a sit-down performance. There were constant whistles and shouts of “we love you!” There was a girl a few rows up from me shimmying so hard I thought she might topple out of her seat.

The sisters introduced another song called “Indigo Dance,” inspired by the funk and blues they listened to during their years spent living in New Orleans. It was a groovy dance tune with help from the stand-up bass. There were hip-hop elements, and the sisters would whistle in between verses.

There was a section of the song where Leah and Chloe put their instruments down and danced with each other, spinning around stage and ending with Leah putting Chloe in a dip. They don’t get to dance too much while on tour, they said, so they started building it into their setlist.

I thought the crowd was really into it before, but when Rising Appalachia started the notes to a rendition of  “St. James Infirmary,” it was brought to the next level.

All the band had to say was, “if you can, get up and dance (with respect to fire code),” and the first few rows of people were instantly out of their seats, dancing in the aisles and filling up the front space of the auditorium.

That last song garnered Rising Appalachia a standing ovation, and soon enough they were back onstage for an upbeat encore song, “Cumberland Gap.”

When it finally came time to leave, drummer Casini hung back and said that touring is what they do for a living, and its places like ours, that feed them a meal and give them a place to stay, and an audience like ours, that makes it all worth it.