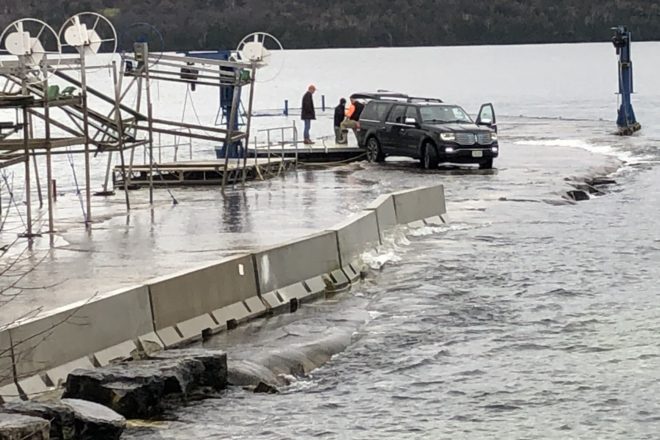 Ephraim Yacht Club members use an SUV and ropes to rescue the club’s large swim raft from the flooded dock on Wednesday. They were concerned that forecast wind and waves before Thanksgiving would damage or sweep away the raft that’s used for tying off boats and for swimming by participants in the youth sailing program. From a level 6-8 inches over the dock Wednesday, the water level subsided on the afternoon of Thanksgiving to about 6 inches below the top of the dock. Photo by Craig Sterrett.

With Lake Michigan water levels at historic highs and a weather system pushing it even higher, strong wind meant waves going over more docks and encroaching on roadways. The high-water event also had boat club members and government officials contemplating what to do if the lake rises more — as forecast in the months to come.

Rather than preparing for Thanksgiving gatherings, members of Ephraim Yacht Club spent part of last Wednesday rescuing club property while wading in ankle-high water on top of their outermost dock.

Just before noon, club members Steve Sauter and Bill Andersen along with helpers Kyle Ouradnik and Bonifacio Perez ventured out onto the water-covered concrete walkway in a large Lincoln SUV. After a bit of makeshift-engineering talk, they tied a yellow rope to two corners of the club’s swimming and sailor training raft. They placed the center of the rope over the trailer hitch and dragged the platform along the water-covered walk to the boat ramp.

Sauter said they had to get the raft off of the dock Wednesday because of the water level. They did not want it to get damaged by wave action.

“It’s over the top of the dock about 6-8 inches right now in this low pressure,” Sauter said. “So, it’s going to be interesting to see when the wind comes out of the northwest. That’s what we’re worried about. It’s east wind right now and the wind’s died and it’s going to go (out of the) north and clock to the northwest.”

“It gets ugly down here” when the wind comes out of the northwest, Sauter said. “Usually we leave the raft on the dock. We did not think it was going to survive this afternoon and this evening. So now we’re trying to move it up in front of the yacht club for the winter.”

Once they had the raft back on dry concrete, Sauter’s helpers from his business, The Ice Cream Source, brought pallet jacks to lift the swim platform just off of the pavement. Volunteers manning the two-wheeled kept the raft off the ground as a pickup truck pulled the raft up the boat ramp. The raft slipped off of the jacks a couple of times, but the group set the platform on a couple of parking spaces between Route 42 and the club’s building.

But what about everything else at the club with Lake Michigan so high? Sauter said the high water has not destroyed club property — yet.

“This summer was a godsend. There was not a single northwest event. We’ve had one minor northwest event earlier this fall,” he said, referring to strong winds that caused spray to hit trees near the highway and then freeze, creating spectacular curtains of ice on trees and fences. High water and wind out of the northwest earlier this fall left rocks and sand on top of village parking lots and shore-side lawns, too.

Sauter, marina operators and villages will be monitoring wind forecasts for months to come.

So what happens when there’s high water and it freezes at the docks or under spots where water usually passes under concrete walkways into harbors?

“We all remember our high school science project, right? What does water do when it freezes? It expands and that causes lots of problems,” Sauter said.

And what will the club do if the water level gets higher, as predicted by the U.S. Army Corps of Engineers, next year?

“We don’t know — probably figure out where we run the sailing program somewhere else next summer,” Sauter said.

Each summer, hundreds of kids come to the Ephraim club to take sailing lessons. Normally, there are 60 boats at the dock — “which will not be usable if it stays where it is or comes up any more,” Sauter said. The club weathered Wednesday’s storm. By Thanksgiving morning, the water level had declined to about six inches below the surface of the club’s highest docks.

The Ephraim club already is protecting the outer edge its dock and property with a “jersey barrier” — a temporary line of temporary, concrete highway parapet wall pieces. Other dock operators are using temporary protective walls. Yacht Works’ marina on the north side of Sister Bay added concrete curbing to the outer edges of the dock walkways to add a little elevation.

While Ephraim club members were saving their raft, Ephraim village administrator and harbormaster Brent Bristol was overseeing protective measures for Anderson Dock and the historic, wooden Hardy Gallery building. Even before the wind picked up, the highest waves touched the southeast corner of the building.

Ephraim village worker Brad Rasmusson operated a tractor with a forklift attachment to straighten up the temporary concrete Jersey barriers along the outer (north) edge of Anderson Dock. He also picked up and moved out of the waves’ path some concrete porch steps that had sat along the inner edge of the dock and small marina.

The village’s floating docks have adjustable stairs attached to them that normally go up to the concrete dock. This year, the village bought the concrete steps in order step up and then step back down to the boat-slip stairs.

“With the waves that are forecast for this afternoon we are just doing a little bit of preventive measures,” Bristol said.

Also by Thanksgiving morning, the water level was about 8 inches below Anderson Dock instead of 3-4 inches over it, as it was last Wednesday. Damage in Ephraim included some asphalt layers strewn at the top of one of the village boat ramps — similar asphalt damage and undermining was found Thanksgiving morning at the Frank Murphy Park boat ramp south of Egg Harbor. Ephraim also endured shoreline erosion, including damage that encroached near the shoulder of Highway 42 on the south side of the village.

Bristol said he does not know all of the next steps for the village.

“Obviously, we have a lot of areas of concern,” Bristol said. “Certainly there’s Anderson Dock. Our downtown area in and around Harborside Park and the village hall is also very low.”

Bristol said local and state governments need to be prepared if the lake level continues to rise and floods next summer.

“Hopefully we’ll be having some collaborative discussions over the winter with the [Wisconsin Department of Transportation], with the county, just on what happens if, as the Army Corps predicts on the high end, the water goes up another 11 inches,” Bristol said. “We’re working with a local surveyor just to get a comprehensive elevation survey of Ephraim. Brian Frisque is doing that for us. Ultimately it’s engineers talking about what can be done for Anderson Dock, at what point is the basement of the village hall flooded? It’s all based on elevations.”

“We’re just trying to do what we can. It’s cyclical, everyone knows. It’s not the first time this has happened. Talking to several old-timers who’ve been around and serving on committees, there isn’t much you can do. It’s been this high or higher before. We’ll figure it out.”