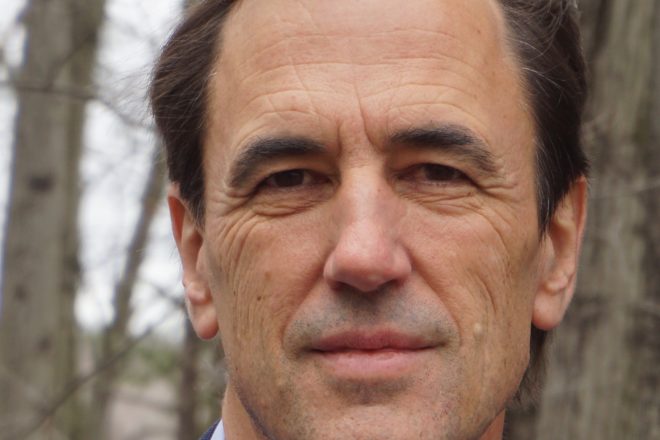 From the landlocked comfort of the Midwest, rising sea levels on the American coasts can seem a low-priority concern. A read of The Water Will Come: Rising Seas, Sinking Cities, and the Remaking of the Civilized World, will change that. Author Jeff Goodell’s book is an eye-opening, blunt look at the impact that rising sea levels are having today in cities like New York, Miami, and Venice, Italy.

Like any book about our changing climate, it’s a scary picture. But Goodell, a contributing writer for Rolling Stone magazine, focuses less on the doom to come, and more on how a stubborn species will attempt to engineer solutions to save homes and economies.

“How we adapt is the most important story of our time,” he said. “ I love covering this, it’s endlessly fascinating.”

In advance of his Sept. 15 appearance at the Washington Island Literary Festival, we caught up with Goodell by phone to discuss his book, the politics of climate change, and the ways that rising seas levels are hitting Midwestern pocketbooks.

MD:  You write in your book that most of the basics of climate science has been known for 40 years, yet here we are still having debates about whether it’s real. Is it frustrating for you to cover this issue?

Jeff Goodell (JG):  I don’t think of it that way. I think of it as this sort of rolling saga with twists and turns, and it’s unclear how it’s going to play out. How will we deal with that? What are the implications? What kinds of inventions and what kinds of policies will arise in response?

There are a lot of unpleasant consequences, but there’s also going to be a lot of crativiety and a lot of change. I don’t think of it as, our status quo world we have now is perfect.

MD:  Much of the discussion revolves around coastal cities, where they’re already grappling with flooding streets, but how will climate change impact the Midwest?

In Iowa they’re dealing with inland flooding. Questions about humidity and agriculture productivity is one area that is going to impact people. You’ll see different insects and agricultural pests.

And in some ways Wisconsin is going to benefit. It’s not all kind of bad news. Some people will be happy with shorter winters. Wisconsin will be a warmer place.

MD:  You write a lot about the costs of bailing out cities devastated by sea level rise and hurricanes, and the massive, costly engineering projects undertaken to protect coastal areas. Is there any data on the amount of money going from states like Wisconsin to some of these regions to support unsustainable communities?

JG:  I don’t know of a study that has looked at the huge amount of money that comes from the Midwest. There’s that unspoken compact that we have in the U.S. that we help people in crisis.

But I was recently at an insurance conference where people are definitely talking about it. Let’s say another hurricane hits New Orleans, are we going to spend another $100 billion to rebuild it again? Are people in Wisconsin and Nebraska going to say, we’re not going to spend another $100 billion on rebuilding these cities? I wouldn’t be shocked if there’s a point where people say no, we’re not going to help rebuild a city in these really risky areas.

MD:  You mention people moving to places like the northwest and upper Midwest. Are we looking at a potential mass migration from the coastal areas?

JG:  I wouldn’t use the word “mass,” like the Dust Bowl. I think there will be moments. Just last year 300,000 people left Puerto Rico because of hurricane Maria.

There’s already a migration away from risky areas. When I did an event in Asheville, North Carolina, there were 400 people there. They had all moved there from somewhere else to get away from flooding.

One thing that’s very clear from climate change is we’re going to have a lot of people moving around. Where exactly they will go depends on a lot of factors. I would think that a place like Wisconsin is a really good place to go.

MD:  Have the policies and politics of President Trump made an impact?

JG:  He’s been the worst thing to ever happen to anyone who cares about this issue in any way. If you care about climate change and think it’s an issue for our future and our present, he’s been a disaster. He thinks it’s a hoax. I don’t think Obama was a great hero in his first term, but in his second term he really did accomplish some things.

Trump has gone out of his way to roll back and undercut the progress not only Obama made but the world made. It’s devastating.

The good thing is I think people are getting wise to what he’s up to, especially on the climate and energy stuff. On the potential for jobs and energy. The Chinese get this very clearly, they’re arranging their whole economy around clean energy.

He’s living a complete fantasy about bringing coal back in America. Coal is dead and gone no matter what Trump does. Solar and wind are cheaper now. No one with a money-making impulse would ever build a coal plant in America again.

MD:  When people talk about climate change and sea level rise, they often talk about impacts by 2100. How long do you think it will be until we see more tangible, day-to-day evidence here?

JG:  We’re seeing impacts now. Look at our summer. Look at the wildfires. Look at the heat waves. The fingerprints on this from climate change are very obvious, very real. This is happening in real time. Look at Ellicott City, Maryland. Two years ago they got a one in a thousand year rain storm. Then two years later they get an even worse storm. These are the kinds of things that are emblematic.

We just had the hottest month on record on the planet. This is happening. This is not 2100.