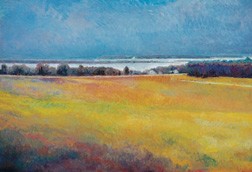 Long-time summer visitor Tim Roach returned to Washington Island to kick-off his first-ever showing of Washington Island paintings at the Art and Nature Center (ANC). The paints will be on exhibit until August 31.

Roach is an architect in Rapid City, S.D. He painted some of his original Washington Island paintings while living on the island for one year (2002-2003) when he was helping to build a house he designed for his sister’s family on Airport Road.

Roach’s oil paintings include island pastoral and waterfront scenes, as well as some fun local gatherings at Nelson’s and Kenny’s. In addition to the “Lake View” reprint on sale now at the ANC, Roach is creating a website to order glycee and paper reproductions of many of his island paintings.