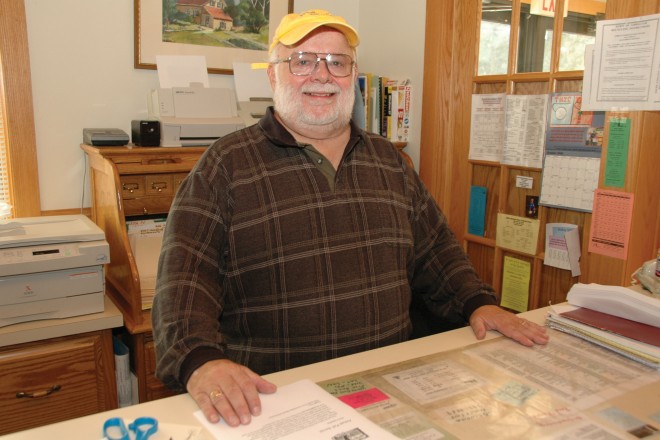 In the hall of Door County icons, perhaps none are as universally loved as James “Digger” DeGroot.

Maybe it’s that perfect nickname. Maybe it’s the voice, with its silky smooth chords that sound like he’s gargling gravel. Or maybe it’s just that he makes almost all of us feel a little taller.

Digger was honored Feb. 8 in a manner befitting the man who helped define an era in Door County, with this year’s Door Community Auditorium roast at Maxwelton Braes.

Today he is Fish Creek’s official welcomer, the man who answers the questions from wayward visitors at the Fish Creek Information Center.

One of his roasters, Bonnie Spielman, illustrated why this is perhaps Digger’s perfect job.

“He could never wait to get up in the morning,” she explained in the midst of 10 hilarious minutes, “because he couldn’t wait to hear what he had to say.”

He knows the town inside and out, and for his work handling even the most inane questions he deserves medal, but the legend of Digger DeGroot was formed in an earlier incarnation.

As the founder of Digger’s restaurant, he made “no shirts, no ties, no rednecks” a slogan not just for his restaurant, but for the county. He opened the restaurant in 1978, and almost immediately it became part of the fabric of Door County summers.

Your vacation didn’t start until you stopped in for a corn dog, a pizza, or tried the yogurt dip. For local kids it was one of the marquee places to get a summer job. Sure, the staff seemed to make plenty of money, but more importantly, they just seemed to have more fun than everyone else (insert your definition of fun here).

Everyone went to Diggers, as much for what it represented as for the food.

It was an era when pranks large and small were a hallmark of business in Door County. A goat placed on a roof. An elk head lifted from Husby’s. A famous photo swiped from the Bayside wall. Digger was the instigator, and the victim, of some of the best.

He famously patrolled the streets on his moped, checking the parking lots of other restaurants to see how busy they were, with the occasional (or not so occasional) pit stop at the Bayside.

One day that moped found its way up the flagpole of the Fish Creek Post Office, not quite flapping in the morning wind. When the cops pulled it down, Spielman said, they discovered it wasn’t registered, and Digger got a ticket to boot.

On another occasion, Sheriff Hollis “Baldy” Bridenhagen stopped traffic at the top of the Fish Creek hill so Digger could perform a death-defying stunt. He bragged that he could jump five cars on his bicycle, and before a crowd he did, clearing five tiny matchbox cars as he flew down the hill. 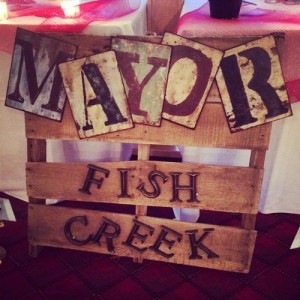 The Mayor of Fish Creek.

He loved to torment his cohort Doug Butchart at Thumb Fun, bringing a group up to the amusement park and trying to get Butchart to kick them out. A Frankenstein might disappear from Butchart’s mini-golf course, or an airplane tail section would disappear from Powell’s Country Inn and show up “crash landed” at the Fish Creek beach. Digger may or may not have known something about each.

He was a horticulturalist, a Santa Claus (some argue he always is), and everything Fish Creek ever wanted him to be. Near the end of a night of stories that aren’t all fit for print, Christie Weber struck a perfect note in summing up what makes Digger so special to this community.

“It’s not the water or the shops or trees that get people here,” Weber said. “It’s the people they meet when they’re here. I’ve tried to think of someone who is a better ambassador for Door County, but I can’t think of anyone better than Digger Degroot.”