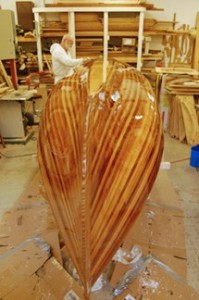 Rob Comstock works on the Adirondack Guideboat he constructed from maple, cherry and basswood at his studio/gallery Erinnwood.

Rob Comstock, a professional woodworker who has spent a major portion of his career producing 18th century furniture, has embarked on a different voyage within his medium of choice.

“I have always had a passion for two things in life – wood and boats,” he said. “I feel like the two of them coming together is a culmination of all I have been learning through the years.”

Recently, Comstock decided to build classic wooden boats, feeling that they exude warmth. His current endeavor is an Adirondack Guideboat, originally built by H. Dwight Grant, of Booneville, New York, in 1905. The original, Virginia, is in the Adirondack Guideboat Museum in Blue Mountain Lake, New York.

Comstock said he chose to build the Adirondack Guideboat not only because of its strength and agility, but also because of the refined graceful lines in its design.

Comstock’s boat will have curly maple stems and decks. The cherry seats are all caned. The carrying yoke is carved from basswood. All the hardware on the boat is brass. The cast brass oarlocks and pins are the only thing Comstock will not be making. These castings are from the original molds used by the Grant Boathouse over one hundred years ago.

“People have questioned, when they see the guideboat, how I could sell such a labor of love,” said Comstock. “I tell them it will enable me to build the next boat.” While he hasn’t decided what the next boat will be, it will “always be a classic wooden boat.”

Interested parties can view the guideboat at Erinnwood Studios/Gallery located at 7456 Highway 57, two miles south of Baileys Harbor. Erinnwood is open Friday, Saturday and Sunday from 10 am – 5 pm or by appointment.