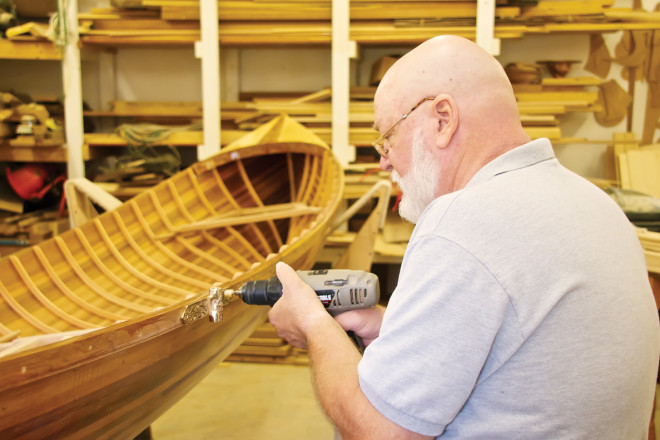 There is a fine sheen of wood dust coating absolutely everything in local woodworker and artist Rob Comstock’s workshop. That soft layer covers stacks of cut spruce, tiger maple, and cherry waiting to be molded and shaped into a gloriously beautiful handmade boat.

“It’s called an Adirondack guideboat,” Comstock explains as he leads a customer who’s wandered in from Erinnwood Studio/Gallery to see his progress. 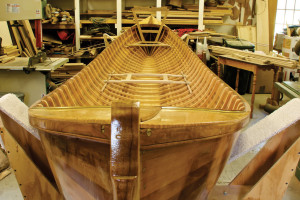 The look on the customer’s face says it all as she stares with a gaping smile. A slow “wow,” is the only word that slips from her mouth.

Rob Comstock and his wife Jan have owned the gallery in southern Baileys Harbor since 1989. As a woodworker who specializes in classic furniture making, Rob is no stranger to creating stunning pieces from nature’s simplest medium.

“Wooden boats exude warmth,” he explains. “I have always had a passion for two things in life, wood and boats. I feel like the two of them coming together is a culmination of all I have been learning through the years.”

The Adirondack guideboat was first conceived in the early 19th century as a boat to carry hunters and all their gear deep into the Adirondack Mountains of upstate New York, in addition to returning with their catch. Because of this, Adirondack boats are known as “America’s first pick-ups.” For a boat of its strength and agility, it is incredibly lightweight at 70 pounds. Propelled by eight-foot oars, its speed comes in part from its design. 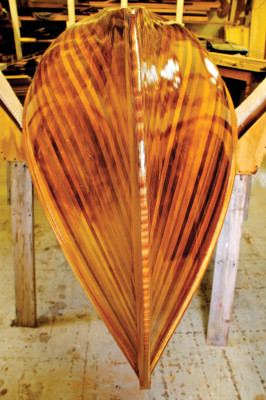 “Next to a racing shell, they’re the fastest rowboat in the world,” Comstock explains. “I first saw the boat at the Chicago Boat Show about 10 or 12 years ago.”

Comstock began to research the boat and its history, and he made plans to model his project after the Virginia, a 1905 guideboat built by H. Dwight Grant of Booneville, New York.

“Every year on Long Lake in New York in the Adirondacks, they have a race. And it’s a race between canoes, kayaks, and Adirondack guideboats. The lake is nine miles long. The first to leave are the canoes, 10 minutes later, the kayaks leave, and then in another 10 minutes the guideboats leave. For the last eight years, the guideboats have come in one, two, three. They’ll pass the rest,” says Comstock.

Comstock’s innate understanding about functional beauty comes from a lifetime of working with wood. He watched with the wondering eyes of a six-year-old as his grandfather worked in his woodshop. Then as a 21-year-old, Comstock joined the U.S. Navy Seabees (Construction Battalion) to work in some of the most challenging and grueling settings of the Vietnam War. His skill working with his hands and mind grew, and when he returned, he and Jan applied the skills he had acquired coupled with her artistic talent and started a business in Marshfield that specialized in signs. 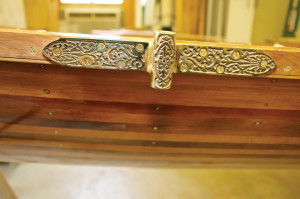 The business was profitable, but Jan and Rob realized that much of their profit was spent visiting Door County. They decided to make a go of running a studio and gallery for their artwork. First they tried selling their signs and were successful at it, designing the first sign for the Flood family at Nor-Door Clinic in Sister Bay. Eventually, Comstock would go on to focus on his woodworking while Jan, a gifted artist in her own right, focused on her painting and later on working for the Peninsula Art School and then the Francis Hardy Center for the Arts.

Rob threw his creative energy into producing 18th century furniture. He has specialized in the Queen Anne, Chippendale and Shaker styles, often recreating finishes and dyes used by the master cabinetmakers of 19th century New England. After commissioning pieces for customers, Rob decided he wanted to refocus on concepts and pieces that he was interested in. That artistic focus evolved into woodturning and creating vessels. 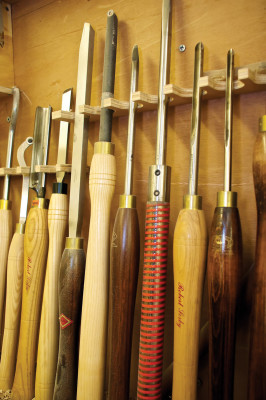 “The neat thing [about creating vessels] is that you never know what you’re going to get. You can go in with the greatest idea in the world, and it makes its own mind up about what it’s going to do. I find that so exciting,” says Comstock.

Rob recently began teaching classes on furniture making and woodturning at The Clearing Folk School in Ellison Bay and spent a part of his summer volunteering as a sailing instructor at the Ephraim Yacht Club.

Boating, in tandem with woodworking, is clearly Comstock’s passion. After he sells the Adirondack guideboat, he plans on starting a new project, perhaps a Whitehall pulling boat or a gaff-rigged sailboat. It’s easy to see, however, this guideboat will always hold a special place in Comstock’s accomplishments and in his heart.

“I should have been doing this my whole life because I love making this boat,” he says. “It just flows.”

The Art of Building a Wooden Boat

Using traditional techniques, Comstock has been recreating an Adirondack guideboat based on the original plans. 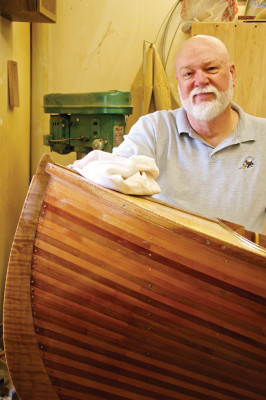 The dramatic lines of the hull were created through a process that involves lofting, an architectural drafting technique in which Comstock drew curved lines onto forms and later the spruce used to create the ribs of the boat. Then using a steaming process, he formed the slats into the correct shape. As soon as he pulled them out, he clamped them onto a form to let them dry for 24 hours. It took about three weeks to construct all the ribs.

Next, using three stanchions mounted to the floor, he began to join the strips of wood to the ribs, making the hull.

The only things on the boat that Comstock will not be making from hand are the cast brass oarlocks and pins. These castings are from the original molds used by the Grant Boathouse, each one an elaborate, antique piece on their own.

The process of building the boat is an intricate one and at press time, Comstock had dedicated 600 hours to the project which he began in February of 2011 and plans to complete by September 2012.