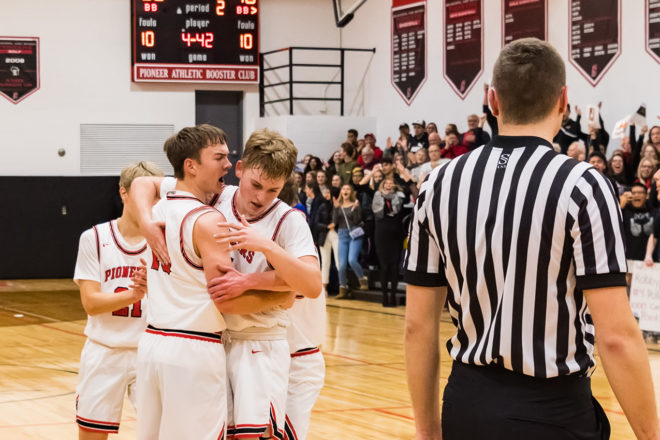 Robby Pollman is congratulated by teammates after scoring his 1,000th career point against Gibraltar. Photo by Len Villano.

Pollman is the 14th player in Door County history to eclipse the 1,000 point mark. Mitchell Jackson of Sturgeon Bay was the last to do so in February of 2019. Pollman is fourth in the conference in scoring at 18.7 ppg, trailing Ryan Claflin of Southern Door (22.1), Ryan Carmichael of Kewaunee (21.3), and Gunnar Tebon of Sturgeon Bay (20.9). Sevastopol fell to 1-5 in the conference and 3-6 overall with the loss to Gibraltar.

Pollman completed his junior year as the third leading scorer in the Packerland Conference and the top scorer for the Sevastopol Pioneers. He was named second team all-conference as a sophomore and a junior.