Note: Having spent the holiday weekend in the Milwaukee area with family and then returning home to compete in the Secret Santa Trivia Tournament with some of my co-workers I have devoted little time to writing (let alone thinking about) a new column. So this week, I revisit a column that relates one of my favorite Christmas stories (even though, as you will read, I don’t like the message contained in the song). 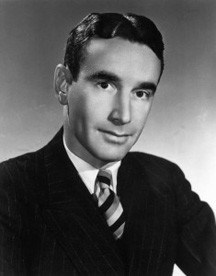 At various times throughout the years of this column, I have commented upon how a great deal of what we consider integral parts of a traditional Christmas were actually invented through commercial venues. Our “traditional” image of Santa Claus (i.e. overweight, with a flowing white beard, dressed in red, with black boots, a wide black belt) was originally created as part of an advertising campaign for Coca Cola. Similarly, the in-house advertising department of Montgomery Ward created the ever-popular Rudolph the Red-Nosed Reindeer. What follows is the story of Rudolph, and his creator, Robert L. May.

Throughout the 1930s the Montgomery Ward Company had been buying coloring books, which they gave away to customers during the holiday season. This promotion was extremely successful, but it was also becoming extremely expensive. So in 1939, the advertising department decided to take a different approach: they would create their own promotional item to give away. After some deliberation, they settled on creating a Christmas story that could be enjoyed by young and old alike; the only remaining difficulty was the absense of a story. Thankfully, among their staff was 34-year-old Robert L. May, who was well known among his peers for the limericks and children’s stories he loved to write. Thus, May was put in charge of creating the story.

Years later, May would confess that he was influenced by Hans Christian Andersen’s “The Ugly Duckling,” and by his own childhood experiences (he was shy and not well-liked as a schoolboy), when he sat down to create his Christmas story. He decided he wanted to create a story about an underdog that eventually triumphed, but how he ended up deciding upon a physically deformed reindeer remains a mystery.

May was certain that he wanted an alliterative name for his creation and after experimenting with Rollo (sounds too lighthearted for a misfit) and Reginald (too formal and European sounding) he eventually settled on Rudolph. The story was written in verse couplets, which he continually read aloud to his four-year-old daughter for input and criticism. When he (and his daughter) were satisfied, May took his story to his boss – who was none too sure that a story featuring a red-nosed (a symbol generally associated with drunkards) reindeer was quite what Montgomery Ward Company wanted. 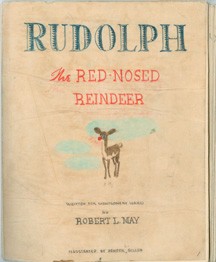 May was undaunted. He convinced his associate in the company’s art department, Denver Gillen, to accompany him to Lincoln Park Zoo, where Gillen made a series of reindeer sketches. When May’s boss saw the sketches he became convinced that the story would work and “Rudolph the Red-Nosed Reindeer” went into production. In 1939, 2.4 million copies of Rudolph were distributed at Montgomery Ward’s stores to happy holiday shoppers. By 1946, even with paper shortages during the war years, more than six million copies of the Rudolph booklet had been distributed and Montgomery Ward had a bona fide sensation.

Now, folks, let me tell you a real holiday story involving the beloved Rudolph. As I just stated, Montgomery Ward, not Robert L. May, had a sensation in the character of Rudolph. As is often the case, May created Rudolph at the behest and under the employment of Montgomery Ward Company, thus the company held full and sole proprietorship of Rudolph, rather than May, the actual creator. Thus May did not realize any of the vast amounts of money Rudolph was generating. Back in 1939, when May created Rudolph, his wife was diagnosed with a terminal illness and ultimately died, leaving May, not only widowed, but with horrendous medical debts, as well.

These debts were still pressing May in 1946 when he approached Montgomery Ward CEO Sewell Avery and asked if there was any way the company could grant him some of the money his creation had garnered to help alleviate the bills. In a remarkable gesture in the history of corporate America, Avery not only granted May’s request, he gave Rudolph’s copyright to May. Thus, Rudolph’s creator finally had sole ownership of his creation.

Now while there may be a few out there who are still familiar with the Montgomery Ward booklet, or the book that was published after May assumed ownership of Rudolph, most of us are familiar with the story of Rudolph through the song made famous by Gene Autry’s recording [which, it should be noted, is quite different from May’s original story]. Indeed, this song is so popular that it is second only to Bing Crosby’s “White Christmas” in sales of holiday songs. Some of you may even know that Johnny Marks wrote the words and lyrics to the song. What you probably don’t know, however, is that Johnny Marks was Robert L. May’s brother-in-law!

Robert L. May quit his copywriting job with Montgomery Ward in 1951 and spent the next seven years tending to the management of his creation, Rudolph. But in an example of loyalty, both by an employer and an employee, when May felt certain that the “business” of Rudolph was firmly organized, he went back to work for Montgomery Ward in 1958 and remained in their employment until 1971.

I once noted that the song, “Rudolph the Red-Nosed Reindeer,” is one of my least favorite holiday songs, and I still hold this opinion. I believe it relates a rather distasteful premise that someone who doesn’t fit accepted views of normalcy could only be accepted among the community as a whole if they serve some sort of useful purpose. The “other reindeer” ostracize Rudolph (in the song) until he leads Santa’s sleigh safely through a “foggy Christmas Eve,” after which they hail him as a hero. This is hardly an appropriate life lesson for our children.

Still, with that having been said, however, the story of an employer’s generosity to an employee, and the employee’s loyalty to his employer, is a wonderful lesson, and a delightful holiday story.