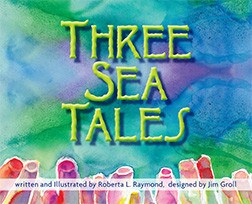 The 40-page glossy book is a culmination of Raymond’s artistic talents as an illustrator and her experiences observing underwater sea life while snorkeling in the Caribbean during the past 40 years. Three Sea Tales is just that – three stories of charming underwater characters that show how courage, curiosity and hard work can transform the lives of these unusual creatures.

It was her firsthand experience watching and photographing flying gurnards (marine fish known for their excited display of their pectoral fins, which resemble wings), cleaner fish and Caribbean reef squid near Jamaica that inspired Raymond to bring these interesting marine residents to the pages of a children’s book.

“Each one has some adventures, of course,” Raymond said. “Gus is a flying gurnard. This is a fish that lives in the grassy areas that precede the coral reef … Gus has hands and little feet and beautiful fins that become wings. Gus wants to fly out of the water, which gurnards are definitely not supposed to do.”

That desire to fly, which his mother has warned him not to do, brings Gus face-to-face with a gang of crabs, a group of seagulls, and a beach full of overeager children. But as with all three stories, a happy ending ensues.

Then there is Frenchy, whose story was the first that Raymond wrote nearly a decade ago.

“Frenchy cleans other fish and actually has a cleaning station … where fish line up to be cleaned by the cleaning fish,” Raymond said.

“The cleaner fish is the doctor and the nurse of the reef,” she added. “It has been stated in scientific studies that if the cleaning fish were to cease to exist, the entire health of the reef would be affected. The cleaning fish is a very important fish.” 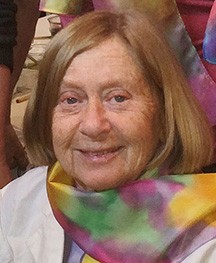 Frenchy is a young cleaning fish who, thanks to her job, learns how to work with fish of different personalities, including a bully triggerfish.

And then there is Sylvie, a Caribbean reef squid who becomes concerned when she isn’t able to change colors like the other squid.

With the help of her friend and some mature fish, Sylvie is given a challenge and through it, finds her true colors.

Accompanying these three stories are Raymond’s 30 original and delightful transparent watercolor illustrations, each of which was created as its own large painting (done on high quality watercolor paper) for the project. In honor of the book’s release, Raymond will have an exhibit of these paintings in her other part-time residence, Oak Park, Illinois, this April. She hopes to do the same in Door County this summer.

“I wanted my book to be beautiful and I tried very hard to make the illustrations real,” Raymond said. “ … There would probably be a better artist than I am but they wouldn’t have had the experience of being in the sea with these creatures. I think that was very important for me to have that intimate relationship with these fish. I’ve had wonderful magical experiences of being surrounded by squid and having them look directly at me, and feeling like in some strange way we were communicating with each other.”

Aside from getting through the arduous publication process and creating the many beautiful watercolor images in Three Sea Tales, Raymond’s “crowning glory” lies on the book’s final page – a statement written for Three Sea Tales by Ocean Conservancy, a Washington, D.C.-based nonprofit environmental advocacy group.

“It takes these creatures who I’ve given a name to and a life to and it puts them in perspective in terms of the survival of these creatures and the survival of the sea as we know it,” she explained. “The Ocean Conservancy is an organization that’s working to save our oceans. Certainly the Caribbean Sea is one of them but the book is a lot more to me than just some stories and illustrations. It is really an attempt to communicate to children and adults.

“I hope that some of the children who read the book will say, ‘I really want to be a marine biologist,’ or ‘I want to be a scientist, I want to know more about this,’” Raymond added. “I hope it inspires some children to be interested.”

The release of Three Sea Tales comes less than six months after Raymond’s first children’s book, Amy and the Amaryllis, debuted in September 2014. It told the story of a young girl whose enthusiasm for growing three large amaryllis bulbs becomes a bonding experience for her family. Amy and the Amaryllis was chosen by the editors of The National Gardener Magazine for recognition and review in the April 2015 issue. Raymond worked with book designer Jim Groll on both projects.

The book was published by Mira Digital Publishing and sells for $18.99. It is available online from The Book Table (BookTable.net). Locally, Three Sea Tales may be purchased at the Unitarian Universalist Fellowship in Ephraim and the Paint Box Gallery in Sister Bay.