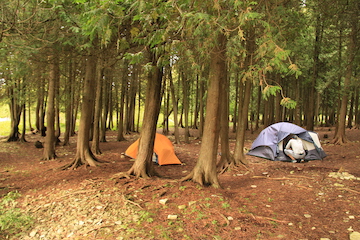 Although I have a family cabin near the very tip of the Door County peninsula, I had never ventured to the northernmost part of Door County – until this past weekend, that is, when I spent two nights camping on Rock Island.

At the start of the summer, I put Rock Island State Park camping on my to-do list, and I’m glad I finally made the trip to this 912-acre island. It’s home to the Pottawatomie Lighthouse – Wisconsin’s oldest – and more than 2,000 feet of beach. Beyond its beaches and lighthouse, the island also possesses a rich history of inhabitants.

Despite being described as a primitive island, a magnificent stone boathouse greets you upon arrival. I had seen many photos of this impressive structure and was eager to see it in person. Completed in 1929, the Thordarson Boathouse is one of many structures on the island that belonged to Chester Thordarson, a successful Icelandic inventor who held nearly a hundred important technology patents.

He and his family purchased property on Rock Island beginning in 1910, visiting the island during summers away from Chicago, where he owned a booming electrical company. In 1965, the state purchased the property from Thordarson’s heirs and turned it into the state park it is today. Around the island, you also see a stone water tower and several stone buildings, a pagoda and the remains of log homes.

Island topography features both high bluffs and expansive beaches, with fantastic water views and overlooks. The island’s interior is mainly wooded, with open, grassy areas near the boathouse. The beaches are primarily rocky – similar to Washington Island’s Schoolhouse Beach – but a stretch on the southern shore is sandy. Hiking trails range from one to 5.2 miles, with the longest circumnavigating the island.

With 40 campsites, you’ll cross paths plenty of times with other campers, but the campsites are spacious, and the island never felt crowded.

This being my first experience visiting Rock Island, I gleaned a few planning tips and recommendations from my three-day expedition.

The journey to Rock Island requires two ferry rides. The first is a 30-minute ride from Gills Rock to Washington Island (the cost is per person and vehicle). The second, via the Karfi ferry, is a 15-minute ride from Washington Island’s Jackson Harbor to Rock Island (the cost is per person; no vehicles or bikes are allowed). Both ferries board on a first-come, first-served basis, which means that during busy travel days and the peak summer season, you’ll want to arrive early and understand that you may need to catch a later ferry. My group was able to catch a midday Friday ferry to Washington Island, giving us enough time to visit Nelsen’s Hall Bitters Pub for food and to join the Bitters Club before boarding the day’s last ferry to Rock Island at 4 pm.

After disembarking from the Karfi, you really are on an island with minimal amenities. Unlike other camping excursions you may have been on, there is no ability to take shelter in the car or run to a nearby camp shop or convenience store to buy forgotten items. Besides the flush toilets, drinking water and firewood for sale, you must be self-reliant when it comes to food, shelter and showering. Speaking of firewood, I recommend buying it when you arrive: Wood purchases are available through the Contact Station, which closes at 4 pm.

Campsites are at least a 15-minute hike from where the ferry arrives, and remote sites are even farther. That means that giving some extra thought to packing can make the trip smoother. Primarily, condense items into backpacks or large bins for ease of handling on the ferry and when hiking to the campsite. Hand trucks and rolling carts are available to campers on a first-come, first-served basis, but be warned: They are rather heavy, even when empty. I saw a lot of fellow campers take their own utility camping wagons, which looked lighter and didn’t require returning to the ferry-dock area. These cost an additional $3 to take on the Karfi, and the cost to take a canoe or kayak on the Karfi is an additional $10.

Plan for the Elements

This is more of a Camping 101 reminder, but it’s amplified when you’re on a remote island: Anticipate wind, rain, sun, temperature fluctuations and bugs. These factors affect clothing choices, shelter preparation and food prep. Packing extra tarps is something we wished we had done when the wind was gusting to 30 mph one night, and again when a tent sprang multiple leaks during a middle-of-the-night rainstorm. Most of the campsites on the island are near the shoreline, which is amazing for views but can also expose you to more weather events. Our site was near a rocky beach, so we opted to pitch our tents closer to the trail for better wind and rain protection among the cedar trees.

• Campsite reservations fill up quickly! I reserved our September weekend in May. Reserve in advance at dnr.wi.gov/topic/parks/camping.

• If you plan to use battery-powered devices, take a charging pack or solar-powered charging device.

• Know how to spot poison ivy while hiking, and always wear long pants and hiking shoes, especially if straying from the trail.

• Sunday-morning departures on the Karfi are often full, so either arrive at the dock early to secure your spot, or plan to take the noon or afternoon ferry back.

• Drinking water is available from a spigot near the boathouse, so you may opt out of packing your own water source.

• Each campsite has a picnic table and a fire ring with a swiveling grill grate for campfires and cooking.