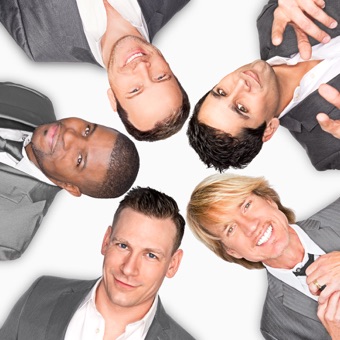 The a cappella singing group Rockapella first gained fame after their appearance in 1991 on the PBS series, Where in the World is Carmen Sandiego? The object of this popular kids’ game show was to use knowledge of geography to track Carmen Sandiego, the leader of a crime syndicate. Since then, the tours of Rockapella have rivaled those of the fugitive Carmen Sandiego and her henchmen, and on Nov. 26, they will travel up the Door Peninsula to the Door Community Auditorium.

Together they create a sound that is unique among contemporary male a cappella ensembles.

“People have a hard time believing it’s just us making all that music,” said Leonard, the group’s songwriter and arranger since 1991. “It’s still those same elements that make modern band music: percussion, bass, melodies, and harmonies.”

“Our success is in the art of it – it’s not what you do but how you do it!” adds Thacher, the group’s human beatboxer (vocal percussive accompanist) since 1993. He jokes that he “spits for a living.”

While the group’s lineup has shifted since its inception, the quality of their music has remained constant, inspiring USA Today to write, “The best musical instrument of all is the human voice – if you’ve seen Rockapella, you know that’s the truth.”

Audiences enjoy their original pop songs along with their interpretations of classic Motown, pop, and soul classics. The Rockapella Christmas concert coming to Fish Creek may feature their takes on holiday classics such as “White Christmas,” “Silver Bells,” and “Santa Claus Is Coming to Town,” along with original songs.

For a preview of their lively, engaging music making, visit Rockapella.com and learn why the New York Times characterized their performance as “an evening of pure entertainment.”

Rockapella appears at 7pm on Saturday, Nov. 26 at the Door Community Auditorium. Tickets for the concert range from $28 to $55, with a limited number of $10 tickets available for students. Advance reservations are recommended and can be made through the DCA box office, located at 3926 Hwy. 42 in Fish Creek. The box office is open Monday through Friday, 12-5 pm. Tickets can be purchased in person, on the phone at 920.868.2728, or online at dcauditorium.org.