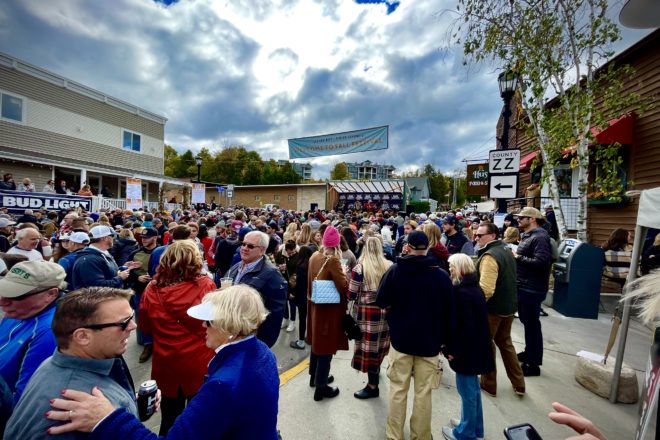 Sneezy returns to the Highway Stage at Fall Fest on Saturday. Photo by Myles Dannhausen Jr.

It’s a battle of the bands in Sister Bay this weekend as live music fills the street for Fall Fest. No matter where you find yourself strolling along the streets of the village, you’ll be hearing rock, reggae, polka and a little bit of everything else. Here’s a brief rundown of who, what, where and when to catch live music during Fall Fest.

The party gets started midday on Friday when The Stangs take to the Door County Creamery stage as the first in the lineup of bands behind the shop. The High Flyn’ Rooster Smokes will follow, 2-6 pm; then rock with Annex, 7-10 pm.

At 4:30 pm, you can catch a little polka from Jerry Voelker and the Jolly Gents at the Sister Bay Fire Station as part of the Lions Club’s fish boil. You can also find the big show from local legends Big Mouth and the Power Tool Horns at Stabbur, 7-11 pm. And if you’re up for the late-night bash, catch Sneezy at Husby’s from 10 pm – 1 am(ish).

Saturday kicks off with the parade down Highway 42 at 10 am, starting at the HuzBowl intersection (that’s Highway 42 and Maple Drive, according to Google), featuring marching bands and a drummer struggling with identity issues.

Once the parade ends, energetic folks will pull the main stage across the highway, and Sneezy will take over, 12-4 pm, with a soulful blend of pop and rock that will get anybody dancing. Down at Stabbur, The Cougars bring the party, 11:30 am – 3 pm, with three amazing female lead singers and a song list of hits from the ’80s, ’90s and a few more recent tunes. And things get rocking again at The Creamery with American Platinum, 12-3 pm.

If you aren’t in the mood for big noise, chill out up the hill at Peach Barn, where Jerry Voelker will make his second Fall Fest appearance at the beer garden, 12-2 pm. You’ll also find a more chill vibe at Grasse’s with Lindenberg, Mellor and Taylor; and at Boathouse on the Bay with Scotty Meyer and Sideshow.

Modern Day Drifters bring a little country flavor, 3-7 pm, at Stabbur; and Whiskey Ditch and the Paul Hanna Band take over at The Creamery, 4-9 pm. And it wouldn’t be Fall Fest without Unity – they’re back at Husby’s at 4:30 pm. Finally, the Sister Bay Bowl gets in on the music with local performer Zephyr, 8-11 pm.

Sunday is much more chill, with just one band on the docket: Frank Maloney and His Big Country Unit will play at the Bowl at 3:30 pm to wind down the festival.

4:30 pm: Jerry Voelker and the Jolly Gents at the Sister Bay Fire Station

12 pm: Sideshow featuring Scotty Meyer at Boathouse on the Bay