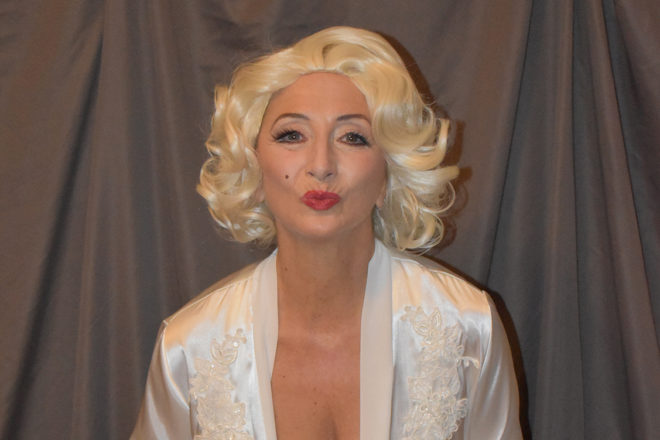 Rogue Theater co-founder Lola DeVillers grew up watching Marilyn Monroe films, and she said she’s still an “old-movie addict.” But it wasn’t until doing extensive research to prepare for the sole role in the play Marilyn/God that she really got to know the iconic actress.

“That, to me, was so powerful – to really get more information about her and figure out where her mind is,” DeVillers said.

Doing so was crucial because the entire one-woman play, written by Rosary Hartel O’Neill and published in 2010, takes place in Monroe’s mind. It explores her internal monologue after she died by suicide on Aug. 4, 1962.

During the 1950s and ’60s, Monroe soared in popularity for playing “blonde bombshell” characters in movies and on television, and soon she became an emblem of the sexual revolution that was beginning at the same time.

It’s a heavy role, according to DeVillers. And it’s even heavier knowing that all the experiences Monroe shares in the play actually happened, from her childhood experiences in foster homes to her adult struggles with abuse and mental illness.

“It’s a comedy-drama, and I am trying to pull the comedy in, but it’s much more drama,” she said.

Since 2016, she’s been waiting for the perfect moment to take the story to the stage, and because 2022 marks the 60-year anniversary of Monroe’s death, DeVillers thought the time was right.

Though she’s had the script for six years, she started memorizing it only two months ago. And that’s no easy task because she’s playing the only character on an almost-empty stage during an hour-long production.

By the time the lights go up, DeVillers doesn’t feel like herself. But that’s an asset, she said, not a product of stage fright.

“I become this character, and I am just living,” she said. “I am not an actor at that point.”

While she’s alone onstage, she has her husband – and director – Stuart Champeau to support her backstage. Their shared trust makes rehearsals easy.

So does the stage space in their basement where DeVillers goes to practice, sometimes with her husband and other times by herself.

For past productions, that basement served as Rogue Theater’s stand-in for a real stage, but last December, DeVillers and Champeau broke ground on a new building for their company, DC Arts Center on North 14th Avenue in Sturgeon Bay. Once it’s complete, the center will serve as the theater company’s own space in which to practice and perform.

Though Monroe is long gone, it’s powerful to see how much her impact remains, and, DeVillers said, surprising to realize how many of the hardships she faced still affect women today. Far from being the “dumb blonde” many people assume she was, Monroe was a “complex woman with a complex life.”