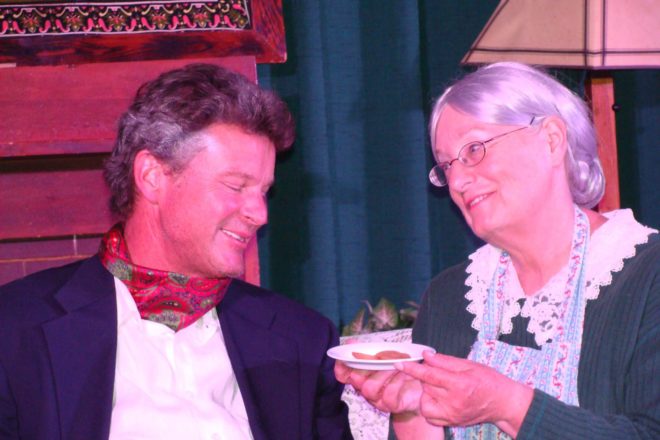 Rogue Theatre presented Ma’s Case: All the World’s a Stage in 2015. This original murder mystery/comedy was written by Carol Lyons, and is the sequel to The Belgian Detective, which first played to Door County audiences in 2006. Submitted photos.

Rogue Theater, established in 2013, traditionally opens each season with a dinner theater/murder mystery presented in various locations in Door County and often in other Wisconsin towns. This year, for example, performances will be scheduled in northern and southern Door County, Sturgeon Bay, Green Bay and Tisch Mills, although the play has not yet been selected. As Stuart Champeau, co-artistic director of Rogue Theater with his wife, Lola DeVillers, said, “The mystery is still a mystery.” Typically, after an early spring run in dinner theaters, the production is offered for a weekend or two in the theater company’s home at 340 Jaycee Ct. in Sturgeon Bay.

As the theater begins its 2018 season, it is inviting writers in the community to submit scripts for an original murder mystery with the possibility of having it produced early in 2019.

Champeau said they are looking for a script 60 to 90 minutes in length, preferably 60. The playwright should suggest musical scores for the production. (Rogue Theater will pay royalties, if required.) The script must include hidden clues to solving the mystery that will keep the audience guessing “who done it” without being too obvious. Finally, the script needs to include a good bit of comedy.

The winning playwright will receive a $100 cash prize and five free tickets to the production of the play. Champeau notes that the competition is a “fabulous opportunity” for aspiring playwrights to have their work produced, and he hopes there will be many entries.

Champeau, by the way, is not only an actor, producer and director with Rogue Theater, but also the writer of Magical Murder Mystery, presented several years ago in Appleton. It starred The Great Rondini, a magician who could stop his heart from beating, as verified nightly by an audience member with a stethoscope.

Patricia Skalka, who divides her time between homes in Chicago and Door County, is the author of a series of murder mysteries – Death Stalks Door County, Death at Gills Rock and Death in Cold Water – published in 2015 and 2016. Death Rides the Ferry, the fourth novel in the planned six-book series featuring Door County Sheriff Dave Cubiak, will be out this spring, and Skalka is working on the fifth mystery, as yet unnamed.

“It’s fantastic that Rogue Theater is doing this,” she said, “and it’s an enticing idea.” Although Skalka has “dabbled a bit with playwriting,” she’s not sure that her murder mysteries could be adapted for Rogue Theater’s competition. “They’ve been described as lyrical and dark, rather than light and funny.”

However, Skalka sees many possibilities for other mystery writers. “A play is dialogue, and novels have a lot of that. Both need characters that readers/audiences care about. Whether people are reading or watching, they must be able to follow a plot that is clever enough to lead them astray and bring them back. It helps if they can think they’ve figured it out and then are surprised at the end. The writer doesn’t want them to solve the mystery ahead of time, but say, ‘Oh, yes, of course!’ at the end,” said Skalka.

Sounds like good advice for those considering an entry in the Rogue Theater competition. No heart-stopping magician required. Just add a dash of humor!

All entries will be considered. It’s possible that more than one script may be chosen for production in subsequent seasons. The deadline for submitting scripts is Feb. 28, 2018. They may be emailed to [email protected] or mailed to Rogue Theater, PO Box 782, Sturgeon Bay, WI 54235. For more information call 920.818.0816.