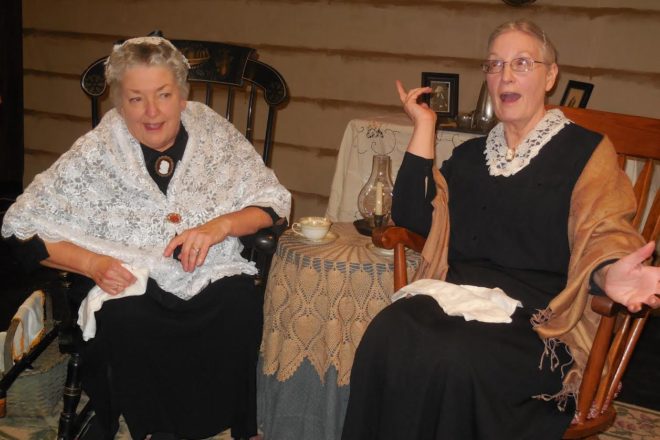 Weather permitting, this production will be performed Aug. 15 and 16, 6 pm, in the back parking lot of the Prince of Peace Lutheran Church, 1756 Michigan St. in Sturgeon Bay. Submitted.

Rogue Theater is presenting a compelling production to chronicle what led to the 19th Amendment, which gave women the right to vote 100 years ago.

In July 1848, approximately 200 women and men assembled in Seneca Falls, New York, to hold a Women’s Rights Convention – what became the beginning of the women’s rights movement. Its organizers were Lucretia Mott, a well-known activist for abolition and women’s rights; and Elizabeth Cady Stanton, who gave an address at the beginning of the two-day convention. Excerpts from this opening speech will begin Rogue Theater’s production of Susan & Elizabeth: A Friendship of Consequence.

Susan B. Anthony, played by Chris Milton, was a plain-spoken, disciplined Quaker who was single minded in her drive to promote the many causes she cared about. Elizabeth Cady Stanton, played by Susan Kohout, was an uncompromising revolutionary who had been born to wealth. As the mother of seven, she had many family and household obligations, but she provided speeches, articles and letters that kept the issues alive.

In 1851, Anthony and Stanton embarked on a collaboration that evolved into one of the most productive working partnerships in U.S. history. As utterly devoted women’s rights leaders, they revolutionized the political and social condition of women in American society. Stanton was the leading voice and philosopher of the women’s rights and suffrage movements, while Anthony was the powerhouse who led the struggle to win the ballot for American women.

Anthony and Stanton worked together for more than 50 years to fight for women’s right to vote and were arguably the most important figures in the suffrage movement. Neither lived to see the passage of the 19th Amendment in 1920.

Written by Milton and Kohout, Susan & Elizabeth is a compilation of excerpts from the speeches, writings and letters of Anthony and Stanton. In imagining what a conversation between the friends might have sounded like, the playwrights have created connective phrases for the sake of flow and continuity.

Weather permitting, this production will be performed Aug. 15 and 16, 6 pm, in the back parking lot of the Prince of Peace Lutheran Church, 1756 Michigan St. in Sturgeon Bay. Tickets are $10 per adult, $5 per student or $30 per car. A portion of all summer proceeds will go to local food pantries.Learn more by calling 920.818.0816, emailing [email protected] or following Rogue Theater at facebook.com/roguetheater.