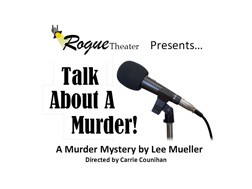 Everyone is on the show to plug the their own “shows” and things get heated with a few ego and personality clashes.

Talk About A Murder! will be performed as a dinner theater and a regular show. Reservations for dinner shows must be made in advance by calling the individual restaurants. The Depot PAC will host show-only performances. The performance schedule: