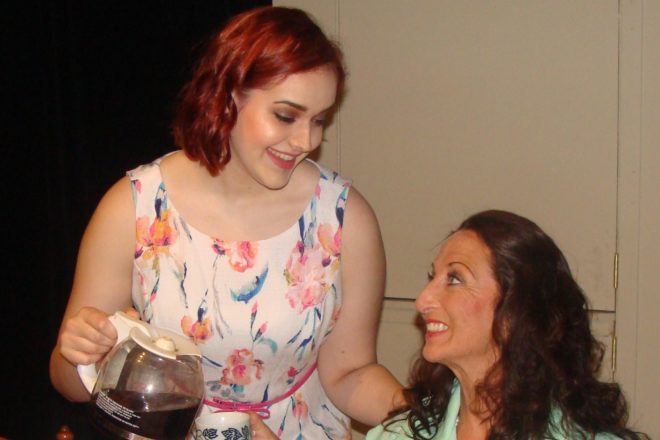 August brings heat and laughter to the Rogue Theater stage with A Coupla White Chicks Sitting Around Talking, by John Ford Noonan. This was Rogue Theater’s debut show in November of 2013. That show starred Lola DeVillers and Katie Lott, and was directed by Bill Bauernfeind. 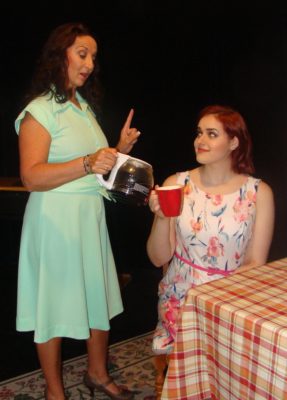 The show takes place in suburban Westchester County, New York, in the kitchen of Maude Mix, who is having a tough day: her husband is off on a weekend spree with his secretary and she can’t get rid of the pesky neighbor who has just moved up from Texas. Mix is a stereotypically uptight housewife living on Charlemagne Lane somewhere in Westchester County. She enjoys things neat and tidy, and is extremely protective of her privacy. But into her life bursts her new neighbor, Hannah Mae, a loud, high-spirited woman from Texas. Hannah Mae badgers Mix into friendship and the two eventually join forces against their errant and erring husbands.

Lola DeVillers stars as Maude Mix and Rachel Seizer as the pesky Hannah Mae Bindler. The show is directed by Stuart Champeau. DeVillers is a teacher, actor and director. She holds a master’s degree in education and has been an educator in Sturgeon Bay for more than 25 years. She manages and is co-artistic director of Rogue Theater with her husband, Stuart Champeau. Seizer, a 2016 Sturgeon Bay High School graduate, now studies at Madison College. She was most recently seen in the all-female production of Love’s Labour’s Lost. She plans to continue her studies and pursue a degree in theatre at Edgewood College.