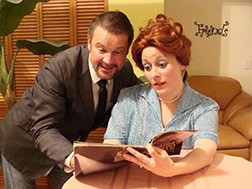 Lucy and Ricky, of “I Love Lucy,” played by Jamie Buesing and Stuart Champeau. Submitted photo.

Rogue Theater and the Inn at Cedar Crossing invite the public to enjoy a night of murder mystery dinner theater with the beloved characters of the 1950s sitcom, I Love Lucy, on March 12.

The mystery dinner theater Trouble at the Tropicabana (written by Tony Schwartz and Mary Lou Ambrose) will include seven local actors, including Rogue co-founders Lola DeVillers (as Celia B. DeMilo) and Stuart Champeau (as Ricky), Jamie Buesing as Lucy, Orie Milton as Fred, Chris Milton as Ethel, Dan Sallinen as Mr. Big, Keri Grimsley as Rosita and Mizu McCarthy as a Cabana dancer. Along with a large cast, there are countless opportunities for audience participation.

Lucy, Ricky, Fred and Ethel all appear in this murder mystery, which takes place largely in Ricky’s club, the Tropicabana. There will be some Latin singing, Cabana girls dancing, a conga line and some mambo lessons, along with the introduction of movie mogul heiress Celia B. DeMilo and notorious gangster Mr. Big.

Questions abound about the murder of one of the show’s characters and it’s up to the audience to figure it out!

“Audiences absolutely love it,” Champeau said. “They get to sit down, have dinner, be in a great place with great food, and it’s really fun. Plus it’s interactive – the audience has to guess who did it and they win prizes or gift certificates.”

Clues are placed throughout the show because as it turns out, any one of the characters could have committed the crime! But there is an even bigger twist behind Rogue Theater’s take on Trouble at the Tropicabana.

“What’s nice about this show is we can change it every night,” DeVillers said. “Somebody can come to the show two different nights and it might be a different murderer each time.”

Mystery dinner theater holds a special place in Rogue Theater’s history. In fact, that is how the theater got its start two years ago before it had its current venue, The Depot Performing Arts Center in Sturgeon Bay. Even after their official space was secured, Champeau and DeVillers remained committed to offering up the fun-fueled mystery dinners.

“I think it’s just so much fun when you get the audience involved because they love being part of the show without actually being part of the show,” Lola said. “We’re in and amongst all the tables and all the guests. And in and out of the crowd. We’re pretty much right there in front of them.”

Trouble at the Tropicabana will begin with a meet-and-greet at 6pm, dinner at 6:30pm, and the play will follow at the Inn at Cedar Crossing, 336 Louisiana St. in Sturgeon Bay. The cost is $30 for dinner and the show, plus tax and gratuity. Call 920.743.4249 for more information.