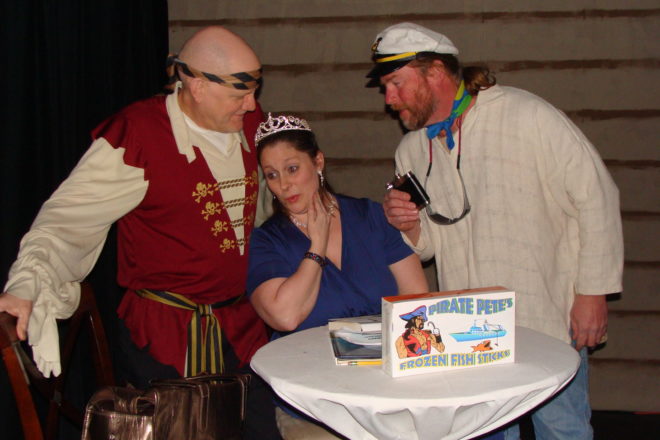 Rogue Theater takes to task celebrity fundraisers, questionable causes and the “beautiful people who support them” with their current mystery dinner show, Fishin’ for Trouble (A Whale of a Fatal Tale).

The comedy, written by Tony Schwartz and Marylou Ambrose, takes place at an annual gala fundraiser for the International Feed the Whales Foundation hosted by actress and whale activist Sally Crouthers. As the story unfolds, the audience is treated to unexpected plot twists, guilty secrets and an untimely death.

As with all Rogue productions, guests can expect a special Door County twist.

“Of course we Door County-ized a lot of the stuff that’s in there,” said Rogue co-founder Stuart Champeau. “The poisonous Sturgeon Bay blowfish, for instance, is the actual murder weapon – so we localize it a bit. It’s done at this gala, which is always what the venue is, it’s always done basically in a restaurant, and it’s a fundraiser for the Feed the Whales Foundation and someone, I can’t tell you who, is trying to steal the funds and there’s also a large diamond called the Hopeless Diamond that they’re trying to steal as well. The shows are honestly so goofy that you can’t help but to laugh your butt off at them. They’re really, really fun.”

Keeping in style with Schwartz-Ambrose productions, Fishin’ for Trouble features a cast of quirky characters, including the CEO of a frozen fish stick company, a filthy rich countess, and the entertainers of the evening, Nautical Nick and the Mermaids, among others. Starring in the Door County productions are Stuart Champeau, Lola DeVillers, Laney Delwiche, Donna Johnson, Dan Sallinen, George Straka, Jamie Buesing, Keri Grimsley and Elliot Vanness.

Given that it’s a mystery dinner show, audience participation is the name of the game. While enjoying coffee and dessert after the hour-long show, guests are encouraged to play amateur sleuths by guessing the murderer and their motive for a chance to win a door prize.

Rogue’s mystery dinner shows have been a staple of the theater’s offerings since its inception five years ago. As Champeau explained, they have proven to be a significant source of funding for the community theater and a popular offering for the peninsula’s offseason.

“In March and April when there’s nothing going on in Door County – you can’t ski, you can’t snowmobile, you can’t do a darn thing – but you’re dying to do something anyway, go to dinner and a show.”

Dinner shows are April 5 at Wave Pointe Marina, 3600 County Road CC in Sturgeon Bay and April 6 at Mr. G’s Logan Creek Grill, 5890 Hwy 57. in Sturgeon Bay. Reservations are required and may be made by calling individual venues directly. Dinner theater tickets include show, dinner, tax and tip. For information, contact Rogue Theater at 920.818.0816 or find them on Facebook.