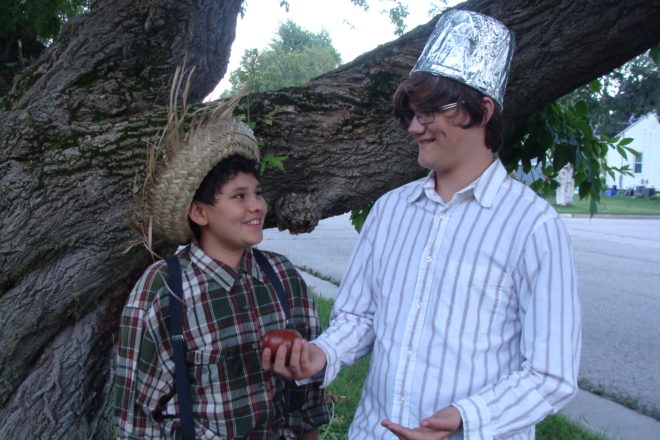 Traveling the American wilderness to distribute apple seeds to the poor, Johnny Appleseed (played by Daniel Sallinen) and his friend Pete (Zeno McCarthy) encounter Sally Ann Thunder Ann Whirlwind (the future wife of Davey Crockett; played by Malia Bicoy), who proves that a girl can do anything a boy can; Betsy Ross (Emily Sternard), who tells them about the creation of the American flag; and Belinda (Kayley Bell), who seeks the help of Johnny and Pete to save an orphanage.  Throughout, Johnny shares many of the adventures that have made him famous: both true stories and tall tales as he meets several others along the way.

Director Lola DeVillers has worked with the students to not only develop their theater arts skills, but also to increase their creativity – a key factor in lifelong success.  The students in this year’s camp range in age from 9-14 and come from all over Door County.  Students have worked on scripts, set design, costumes and props.  Together they will present a public performance of their work at Jaycee Hall, 340 Jaycee Ct. Sturgeon Bay.  There’s a suggested $5 donation asked at the door.