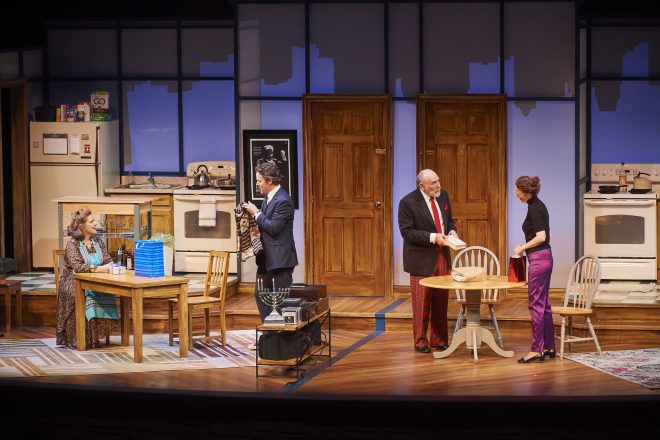 There’s something wonderful about sitting two great actors down at a table and letting them act the heck out of a conversation. Good actors can cry on command or make an audience roar with laughter, but great ones can engage you completely in an extended scene of one-to-one conversation. It’s exactly those kinds of moments that make up Romance in D at Peninsula Players Theatre.

There is little narrative exposition in real life. There is a lot of it in the media we consume, of course, and different media have different ways to show it. In theater, characters often monologue or tell each other everything about themselves in order to feed the audience information.

But we seldom spend conversations telling others expository information about ourselves, especially when we’re past the first meeting or two. Instead, we talk about things that excite us, and it is those conversations that are the most compelling for audiences.

Romance in D is about two couples engaging each other in conversation about the things they’re most passionate about. The four characters are defined not by what they’ve done in the past, but by what they love.

Charles Norton, played by Neil Brookshire, loves music. He uses it to communicate. He has a giant poster of Leonard Bernstein hanging in his apartment. Charles is socially awkward and prefers to be alone, but when he starts talking about music, he comes alive.

When we first meet him, he’s stilted and annoyed with the conversations he’s engaging in, but when he meets his neighbor, Isabel, played by Cassandra Bissell, he opens up for the first time by teaching her about the pentatonic scale. After he tells Isabel that he prefers music to language, he asks her whether she’d like to hear how he “says” Isabel on the piano. It’s a beautiful scene – the kind that draws you into the budding romance between the two.

George Fox, played by Greg Vinkler, is a logophile: a lover of words. He bonds with his daughter, Isabel, through games of Scrabble. Later in the play, he sparks a relationship with Charles’ mother, Helen, played by Judy Blue, and learns that her favorite word is “mellifluous,” which comes back throughout their interactions.

Interestingly, though, the moment when these two fall for each other is completely devoid of conversation: when George sweeps Helen off her feet in a short dance reminiscent of a soft-shoe routine set to “It’s Been a Long, Long Time” by Harry James and Kitty Kallen. (Young folks will recognize this tune as the one Steve Rogers and Peggy Carter dance to in Avengers: Endgame.)

Watching people talk passionately about what they love is engaging, and that is exactly what the characters in Romance in D spend their time doing with one another. It’s how we talk in real life. The narrative is simple, but there’s nothing wrong with that in a romantic comedy. The fun of the genre is seeing how – not whether – people fall in love, and the mark of a great romance is whether we believe in the love story we’re shown.

The honesty on display in this production is incredibly satisfying, from Tom Mula’s direction to Karin Kopischke’s subtle, character-driven costume design. The stage is split in half by an invisible wall, with two identical, but mirrored apartments on either side. One is neat and proper, with shelves stocked full of books on music, CDs and concert DVDs. The other is messy, sparse and furnished with a table and purple bean-bag chair.

The city skyline looms over the top of the set, with its reflection visible through the transparent back wall of the set. It’s a creative design that requires the audience to use their imagination a bit, but in doing so, it creates opportunities for interesting and meaningful tableaus.

Romance in D is about reconnecting with each other, even when it’s difficult. Sometimes all it takes is to say, “Wait!” and to push a little deeper, but it’s always possible to make a connection again.

There’s still plenty of time to take in the show, which runs through Sept. 19. Tickets are available at peninsulaplayers.com.