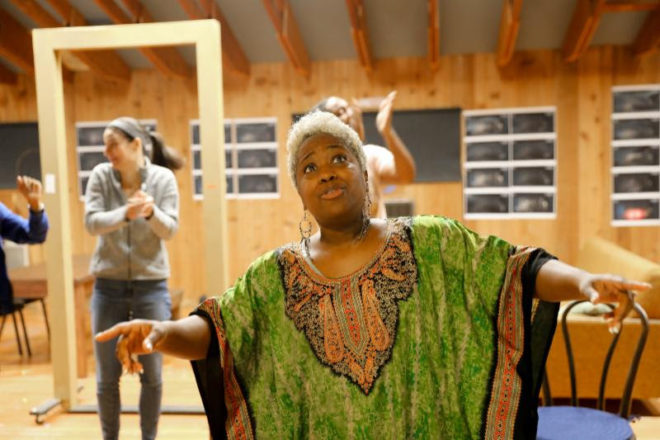 Peninsula Players presents “Ghost The Musical” Tuesdays through Saturdays, 8 pm; and Sundays, 7:30 pm (except for Aug. 18 at 4 pm).

Ghost The Musical – a timeless musical fantasy about the power of love based on the Academy Award-winning film by Bruce Joel Rubin – opened July 31 at Peninsula Players Theatre (peninsulaplayers.com) as a retooled, smaller-cast version of the 2012 Tony Award-nominated Broadway musical.

In the musical, Sam and Molly are a young couple whose relationship takes a shocking turn after Sam’s untimely death. Trapped between two worlds, he refuses to leave her when he learns she’s in grave danger. Desperate to communicate with her, he turns to a storefront psychic, Oda Mae, who helps him protect Molly and avenge his death.

“Fans of the movie can be assured the scene at the potter’s wheel is in the musical,” said Greg Vinkler, Peninsula Players’ artistic director. “The music is lovely; the romance is touching; and the laughs are very big. The creative team is working together to make a memorable theatrical experience. The use of theater magic, such as well-timed movement to light and sound effects, will combine with the musical score and guide the audiences’ imagination on this supernatural romance.”