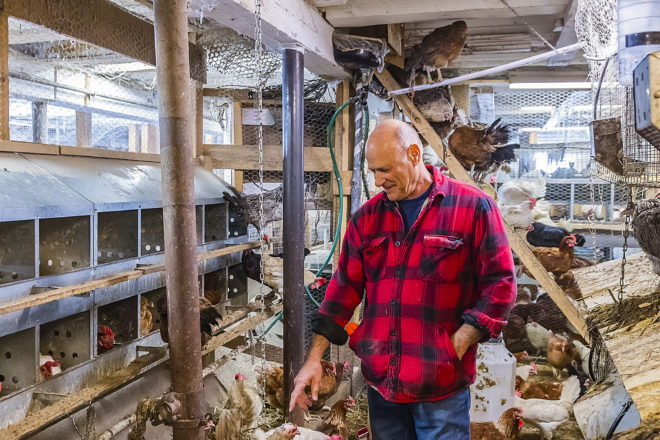 Ron Schweigert amongst the chickens at his farm. Photo by Len Villano.

“As a restaurant [owner], I want to use good-quality ingredients that are grown as responsibly as possible,” Coulson-Kanter said.“We definitely make menu decisions based on what Flying Tractor Farm has available.”

That baby kale — along with other vegetables, eggs, honey and meat — are the result of a beautiful relationship between old and new.

Schweigert’s Flying Tractor Farm in Sturgeon Bay grows and produces all of its fare using sustainable, environmentally conscious practices. For the 66-year-old  Schweigert, retirement means being out the door every morning by 7:30 for a full day’s work. The farm is home to cows, pigs, goats, rabbits, chickens, a donkey named Jake, outdoor vegetable fields, two greenhouses and a heated indoor growing area for greens.

“Farming is maybe the most challenging job that anybody could do,” he concluded. So when I asked him why he does it, he let out a big laugh. “I’ve just always wanted to do this.” But it wasn’t until he’d retired from a full career in mortgage banking that he made that dream a reality here in Door County.

Schweigert sees farming as a natural combination of his family’s history and a concern for the environment. He was born on his parents’ farm in Bonduel, Wisconsin. Even though his parents had to stop farming when he was just four years old, all his life he heard about that time on the farm being the happiest time of their lives. As for his interest in the environment, Schweigert credits the Mother Earth News magazines he started reading back in college and said even then he was thinking about farming.

Schweigert’s career took him out of Wisconsin, but he had vacationed in Door County since his childhood and spoke fondly of tent-camping here with a friend in the “dead of winter,” enjoying snowshoeing and hiking with no one else around. “Door County has been on my radar forever,” he said.

Schweigert found the home for his farm in the form of a 20-acre parcel of land on Whitefish Bay Road. The price was right. The house wasn’t very old. The barn was. And that’s just the way Schweigert wanted it.

“When you see a barn falling down, it feels like a piece of Americana is disappearing, and it’s just sad,” Schweigert said.

The barn at Flying Tractor Farm dates back to 1896. Not only has he restored it, but he’s also added technology to give it new life and new purposes.

The barn’s roof is now covered with solar panels, and what had been the barn’s hay mow has become a high-tech growing room for the greens Flying Tractor Farm sells to the White Gull Inn and other restaurants. Grow lights allow for year-round production of micro greens and salad greens.

The room has rows and rows of long growing trays. About half of them use hydroponics to grow salad greens; the rest produce soil-grown micro greens. Both have been so popular with Door County restaurants and residents that just this winter, Schweigert had to reconfigure the room to add more growing trays, upping his greens-growing capability by 250 percent.

“He has beautiful spring mix — especially in shoulder season when it’s hard to get,” said Coulson-Kanter. She typically buys 10 to 15 pounds of greens each week for her restaurant, plus about a pound of micro greens.

“I love to support [Flying Tractor Farm],” said Healthy Way Market owner Adam Goettelman, who gets a weekly delivery of greens and other produce from Flying Tractor Farm from May through December. “Ron is somebody who’s trying to do the right thing in agriculture,” Goettelman said. “He believes in it. He’s passionate about it.”

That passion is evident when you meet Schweigert in person. For me, that happened in August at the Baileys Harbor farmers’ market, when he was selling his products and talking excitedly to customers about the animals that had recently been born on the farm. He gave me his card and invited me to take a tour. Three days later, my family and I were there holding baby animals, tasting tomatoes and learning about all that happens at Flying Tractor Farm.

We started through one of the greenhouses, which, at that time, felt like walking through a jungle, with tomatoes and cucumbers growing vertically up to the ceiling. As we walked around the property, watching our steps as chickens roamed as they pleased, Schweigert gave us a hands-on, all-five-senses lesson in farming.

He took us into the pen with the goats and baby pigs and invited us to pet his donkey, Jake. He proudly pointed out the original parts of the barn and took us into the heated growing room. In all, he spent two hours with us, and I’d say he probably enjoyed it as much as we did.

Although it’s clear Schweigert loves the farm, it’s equally clear after talking with him that farming is only one part of the equation. He is just as passionate about connecting people to the farm — to its products and to the land that produces them. He repeatedly used the phrase, “Know your farmer.” But he really wants to know his community, too.

“I encourage people to come visit. I love giving tours.”

In addition to meeting visitors at his farm, Schweigert is actively growing connections and awareness of local farming as a founding member of SLO Farmers Co-op. SLO — which stands for “Sustainable, Local and Organic” — currently comprises six farms in northeastern Wisconsin. The co-op has strict definitions and standards for its members and their methods, ranging from using only non-GMO seeds and banning the use of hormones in animals to encouraging space for wildlife habitat and showing community involvement.

“Educating the public is a key part of the co-op,” Schweigert emphasized.

He sells his products through the co-op and at farmers’ markets throughout Door County, and although customers have always been welcome to stop by the farm to buy what they need, he is opening an onsite market this year.

Schweigert said Flying Tractor Farm produced more than 5,000 dozen eggs, plus meat, vegetables, greens and honey in 2018. This year will be the farm’s fourth year in production, and it continues to grow. Schweigert is doubling his vegetable-planting acreage and increasing his staff.

“Standing out in the field,” he said, “I’ll look at the greenhouses. I’ll look at the buildings I’ve put up, and I can see how it’s functioning. It’s come together just as I saw it in my mind’s eye.”

Schweigert said one of his favorite things about his work at Flying Tractor Farm is being able to give his land new purpose.

It seems the farm has given him new purpose, too.