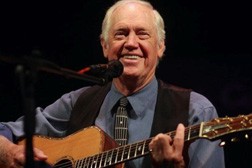 Ronny Cox will take the Third Avenue Playhouse (TAP) stage on Aug. 18 at 7:30 pm. Cox is an artist who brings his extraordinary view on life into a magnetic, likeable, onstage persona.

With a career spanning over 125 films and television shows, Cox is often identified with the villains he played in movies like Total Recall, Robocop and the TV series Stargate. Cox began his acting career as the guitarist in the famous “dueling banjos” scene in Deliverance.

A few years ago, Cox’s wife Mary passed away. He confesses that one of the ways he has dealt with the loss of Mary has been through the music. The result is Cox’s newly released album, Ronny Cox – Songs with Repercussions, a personal studio collection of songs that reached the #1 spot on the Folk DJ list in the summer of 2009.

Also on Aug. 18, TAP is offering theatre workshops. From 10 am – noon, “Introduction to Play” will introduce beginners to theatre skills and self-confidence. The fundamentals of improvisation will also be covered. This workshop will be for children 5 – 8 years old.

From 1 – 3 pm, “Advanced Play” is for 9 – 12 year olds, and will cover the basics of improvisation and building an unscripted scene.

Workshops will be taught by Ryan Patrick Shaw and are $20.