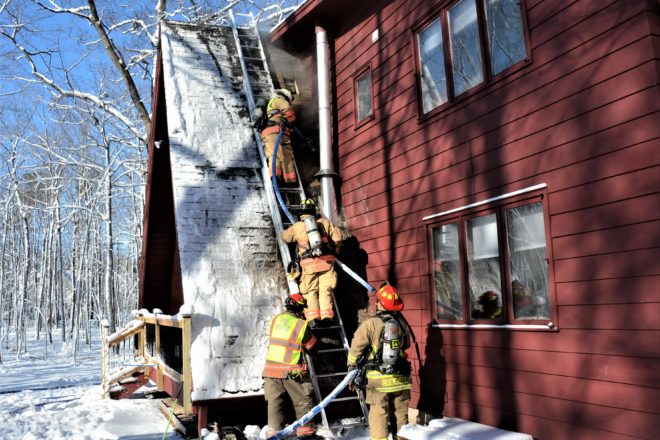 The temperature was hovering just above 0 F when the Gibraltar Fire Department was dispatched Saturday around 9:40 am to a chimney fire on Gibraltar Road in Fish Creek.

Deputy Chief Jerrad Anderson, the first to arrive, sized up a scene that included smoke coming out of the roof on both sides of the cabin. The possible roof fire prompted Gibraltar Fire Chief Andy Bertges to activate the first of five levels in the box alarm system, or MABAS (mutual aid box alarm system).

The first level switches from automatic aid that’s provided by the Ephraim and Baileys Harbor departments to aid from all of Northern Door County, Bertges said.

“[MABAS] brings in more resources, and it’s laid out already, preplanned, so we know what we’re getting” with the various levels, Bertges said.

As it happened, the firefighters cut a hole in the roof immediately, isolated the fire and were able to contain and extinguish it with less than a full tanker (3,000 gallons) of water.

“They caught it before it got into the main portion of the house,” Bertges said.

The cause of the fire is still under investigation, but there was a wood-burning unit in use by the home’s occupants. The fire appeared to have started from the chimney. No one was hurt.

“They had fire alarms, and they caught it in time and called 911 right away,” Bertges said, “which was great because otherwise they probably would have lost the structure because it started to encroach in the main part of the house.”

Older cabins often have a sandwich roof system, with the old roof covered by insulation and a new roof. The fire was contained between those two layers, Bertges said, with the smoke they had witnessed pushing out from the available egress.

Bertges said the firefighters were on the scene until about 12:15 pm.

“If you own a wood-burning unit, make sure you have it cleaned,” he said. “We’re in the cold days of winter here. Just be safe.”

The BP convenience store/gas station in Fish Creek donated coffee for the firefighters, and the Northern Door YMCA opened its doors to let them warm up from the frigid temperature.

“It was extremely nice,” Bertges said. “My thermostat on my truck said 2 degrees.”

“It goes to way back when they had boxes on the street,” Bertges said, “and you’d pull that for dispatch, and it would be dispatched from the box number.”