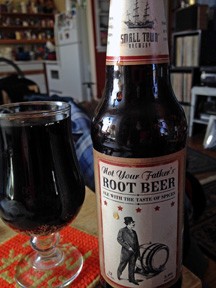 I hope that, or something like it, is what brewmaster Tim Kovac at Small Town Brewery screamed at the top of his lungs the first time he brewed Not Your Father’s Root Beer, described on the label as Ale with the Taste of Spices.

Others have tried to make an alcoholic root beer, but this is the first one I’ve had that succeeded. It tastes like the best root beer you’ve ever had, but with a little alcoholic punch to put a spring in your step – a 5.9 percent punch, to be precise.

Kovac began brewing high alcohol root beer at his Small Town Brewery in the village of Wauconda, Ill. He brews 10.7 and 19.5 percent versions that apparently quickly sell out wherever it shows up on tap in Chicagoland.

Greens was the missing ingredient for an elaborate sandwich I had been building in my head and planned to execute when I finally got home for the day, so I popped into a grocery store and was immediately confronted by green I had not expected – a big display of Schell’s Arminius Hoppy Pale Lager. Better yet, it was on sale for $1.99 for a four-pack of 16-ounce cans! 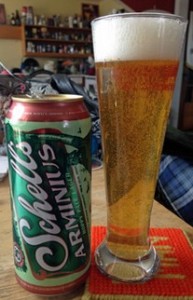 I love a good lager, and this is a great one. It has the golden carbonation of one of the old Hamm’s Beer lights and a thick rocky white head.

And I’ve been a fan of Schell’s of New Ulm, Minnesota, since the mid-1980s when I first ran across their Ulmer Braun – a dark lager – on tap at a corner tavern in St. Michael, Minn. The owner served up a local cheese and sausage plate to go with the luscious dark lager. It was a great beery moment.

Arminius was a 1st century German warlord who defeated Roman legions in a famous battle, and is seen as a freedom fighter by those of German descent. In New Ulm, where the Hermann Monument Society has erected a statute of a sword-wielding Arminius, Arminius is known as Hermann the German.

Well, I raise my glass of Arminius Hoppy Pale Lager in the general direction of Hermann the German. Wish I would have picked up more than two four-packs.