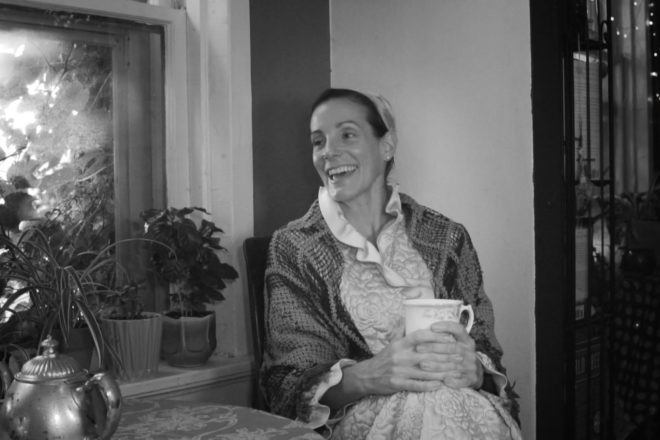 The challenge of working with strict limitations can often create surprising bursts of creativity and innovation – necessity is the mother of invention, after all. The COVID-19 pandemic has hit arts and entertainment organizations particularly hard this year, and theater has faced some of the most challenging limitations: ones that reach to the very core of the medium.

How can a theater company deliver performances to audiences safely, and how can it stage a production without jeopardizing its actors’ health? Door Shakespeare set out to answer both of those questions with its production of Rosalind, which premiered this week.

Michael Stebbins became Door Shakespeare’s artistic director toward the end of 2017, and now, just a few years later, he’s found himself trying to lead the company through its greatest challenge yet. Like many arts organizations, Door Shakespeare turned to social media to connect with its audience through artist spotlights and other quality engagements, but Stebbins knew the company wanted to mount a production this season, even with the limitations in place.

“For our first virtual sharing – that will be Rosalind – we made the decision that the one thing that we would like to show our folks who are coming to see the show virtually is a production: an actual production,” Stebbins said on the Door County Pulse Podcast last week.

Remote-meeting software such as Zoom has been crucial in office settings this year, but it has also allowed arts organizations to present offerings that are similar to what they normally offer live. In the case of theater companies, many troupes have presented virtual staged readings, typically performed by actors with scripts and minimal staging.

Stebbins said that Zoom had been an integral part of the rehearsal process, but for the performance of Rosalind, he wanted to take things to the next level.

Door Shakespeare works through the Actors Equity Association, and on top of public-health limitations for large gatherings, there are also guidelines and an approval process that all union theaters must go through to work with Equity actors this year. To date, Actors Equity has approved only two theaters to resume productions this season – one of which has actors wearing masks, socially distanced with plastic partitions, performing to an outdoor audience. Therefore, the only way to stage Rosalind right now would be to do so with actors performing from home.

“By way of three actors working remotely, each with costumes and sets and props delivered to their respective dwellings in a U-Haul cargo van,” Stebbins wrote in an email outlining the production, “through a process utilizing Zoom for rehearsals and communicating, iPhones for filming, FaceTime to view set-up shots in each location, and a careful editing process … we have put on a play.”

And so, through an unusual and impressive combination of theater, film and videoconferencing, Rosalind premiered on Sept. 2 and will run through Sept. 13. Purchasing a ticket does not grant access to a download to watch whenever you please; rather, performances will take place Wednesday through Saturday, 7:30 pm, with additional performances held Saturday and Sunday, 5 pm.

Buy your tickets in advance, and settle in a few minutes before the virtual curtain rises to take in Rosalind as you would enjoy a live production during any other year.

Although this has been an incredibly challenging year for theaters nationwide, I’ve really enjoyed seeing how companies have innovated to keep the spirit of live theater alive. If the heart of theater is honesty – and I believe it is – the question is, how can theaters maintain that honesty for the audience and the actors, all while keeping everyone safe?

Rosalind will be Door Shakespeare’s attempt at answering that question in its own way. Though all theatergoers await the day when they can safely and comfortably take in performances in person again, this period of creativity and innovation should have lasting, positive effects on the art form.