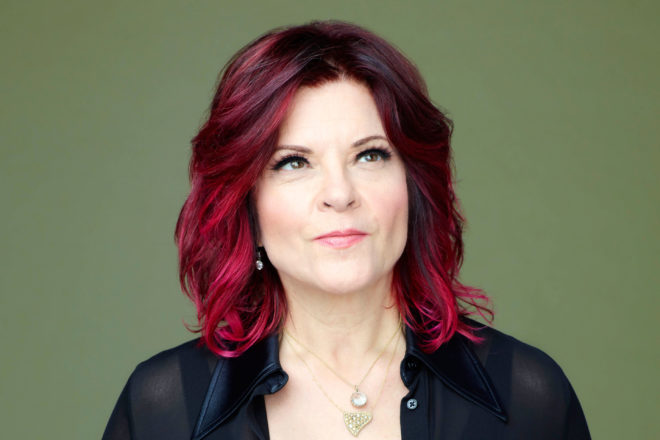 Roseanne Cash promised to bring a kickass band to her July 16 show at the Door Community Auditorium. She did not disappoint.

Joining her on stage was her husband of 24 years and guitarist extraordinaire John Leventhal. Opposite him was electric and acoustic guitarist and pedal steel player Kevin Barry, whose day job is director of ensembles at Berklee School of Music. On bass, Zev Katz, who also plays with Roxy Music. Dan Reiser on drums and Glenn Patcha on keyboards.

The band sauntered out and Leventhal began playing shimmering chords on his Telecaster. The band kicked in and Roseanne quietly took the stage to sing a beautiful, haunting “A Feather’s Not a Bird” from her 2014 Blue Note record The River and the Thread:

“A feather’s not a bird

The rain is not the sea

A stone is not a mountain

But a river runs through me.”

When she came to “Etta’s Tune,” another selection from The River and the Thread, about the wife of her father’s first bass player, Marshall Gant, I thought she might have been speaking to me directly when she referenced the year 1955 and said it was important, but did not explain why.

I took it to mean she was referring to our conversation when I talked to her a week earlier to preview the show. I always try to find some sort of goofy ice breaker when I’m doing an interview in the hope of turning it more into a chat than an interview. I think you learn more that way.

Since she and I were both born in 1955, I started off by saying that it’s always nice to talk to another 1955 baby. And that did get us off to a chatty start, I think. When we finished talking, she signed off by saying, “Take it easy, 55er!”

That’s why I thought her mysterious 1955 reference at the show was for my benefit.

But later in the show, she sang another song that brought up the year 1955, with the murder of 14-year-old Emmett Till. But she did not stop to say if this was the important thing about 1955. I think it was just a coincidence that she had to mention it again, and really meant to address me with the first reference.

Or perhaps I was simply enchanted by her siren song of beautiful resonating tones.

From her 2009 album The List, where she tells the story of her dad writing out on a yellow legal pad when she was 18, her music education – 100 Essential Country Songs. She did three songs from that record – a haunting take on Lefty Frizzel’s 1959 hit “Long Black Veil”; Don Gibson’s “Sea of Heartbreak,” which she delivered with soulful understanding that she makes look so easy; and a spooky rendition of Bobbie Gentry’s “Ode to Billy Joe.”

They topped that with a high-charged version of The Beatles’ “Things We Said Today.” “Bet you didn’t expect that,” Cash said to the audience.

A couple of personal highlights: “Particle and Wave,” from her late 2018 release She Remembers Everything, and as for that title tune, I fell in love with it, the opener on the record, the first time I heard it. Her dramatic live reading made it soar to the top of my I-can’t-wait-to-hear-that-again list.

The encore for the well-attended show was a rocking version of her dad’s 1961 hit “Tennessee Flat Top Box,” a song she has been doing at least since 1987, when it appeared on Roseanne Cash’s critically acclaimed album King’s Record Shop.