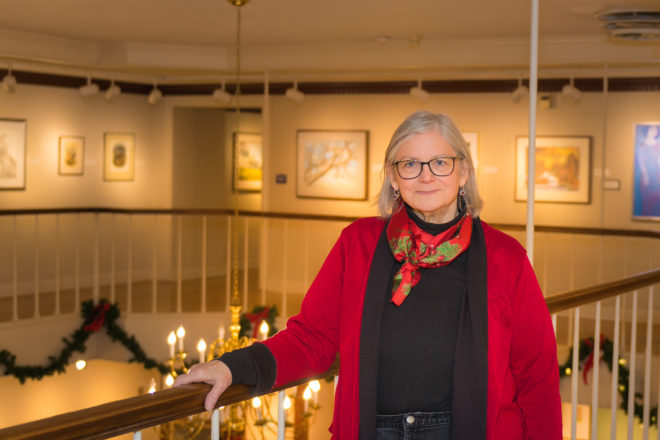 Deborah Rosenthal has curated more than 150 exhibits during her 24 years with the Miller Art Museum. She retires at the end of this month. Photo by Len Villano.

Deborah Rosenthal came to Door County in 1986, when her late husband, Cy, was hired by the county as a psychotherapist. She had bachelor’s and master’s degrees in fine arts, art history and museum studies and years of experience working in museums in Illinois, Arizona and South Dakota. Visiting the public library in Sturgeon Bay, she happened upon the Miller Art Museum (MAM).

“It was one of the nicest I’d ever seen,” she said.

Seven years later, after serving as a museum volunteer and part-time staff member, Deborah became the curator of MAM. At that time, the wall space for exhibits was half the size it is now, and the permanent collection included just about 250 paintings, drawings, photographs and prints. When she retires at the end of this month, she will leave a much-expanded facility, including a second-floor gallery dedicated to the work of Gerhard Miller, a staff work area in the basement, and a permanent collection of about 1,000 pieces.

For readers unfamiliar with the history of MAM, it opened as a single room in 1975, funded by Door County’s premier artist, Gerhard Miller, and his wife, Ruth, with the condition that the community raise money for its expansion. Their goal was to stimulate, educate and inspire visitors of all ages through exposure to the work of local, regional and national artists. Although the size of the facility, which adjoins the Sturgeon Bay branch of the Door County Library, has grown tremendously during Deborah’s 24-year tenure and that of the former executive director, Bonnie Hartmann, Deborah said the job itself is essentially the same.

“We’re still doing seven major exhibits a year,” she said, “and they’re still put together in the same way.

“Because Door County is such a wonderful art community, we have usually chosen to do group shows. Less frequently, we have mounted retrospectives that review the life work of a single artist. For an artist to commit to a retrospective, even in a smaller venue like ours, is an emotional thing.

“The most wonderful time I’ve had at the MAM,” Deborah said, “was the 100th birthday retrospective of Gerhard Miller’s work in 2003. His conversation with Charlie Lyons, the museum’s first curator, was the richest, most memorable experience in my 24 years here. Before a large crowd, Charlie asked questions and Gerhard talked about his career as an artist. When he had trouble finding the right words, Charlie, his friend for so many years, helped out. Gerhard passed away just a short time later.”

Another part of the museum’s program of which Deborah is especially proud are the exhibits for children, staged during the winter, when life in the county is less busy, and left up for 10 weeks, rather than the usual seven, so families can return several times.

In 2007, she received a Distinguished Service Award from the Wisconsin Art Education Association for curating the Castle of Art, a free-play exhibition for children, for which she did a huge amount of research on the medieval theme.

The last of the more than 150 exhibits Deborah has curated is Beyond Words: The Art of Regional Children’s Book Illustrations that will remain up until Valentine’s Day. It celebrates the best in original artwork from six Wisconsin illustrators of children’s books, three of them from Door County, including Malin Ekman’s delightful illustrations for a 1980s edition of Alice in Wonderland. The exhibit includes an activity center and, as a nod to Alice, a room (with try-on costumes!) set up as the Mad Hatter’s tea party. Deborah describes it as a family-friendly spectacle of delight geared specifically for children of all ages. It was designed collaboratively with executive director Elizabeth Meissner-Gigstead and staff member Michael Nitsch.

“It’s been an honor to be here,” Deborah said. “The MAM has been an important part of my life, and I want to remain connected as a volunteer.”

In retirement, she is “most looking forward to not having an endless round of deadlines,” to getting back to her own drawing and painting and, most of all, to spending time with family, including a year-old granddaughter in Minneapolis.