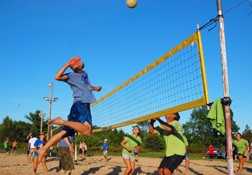 Blue Horse Beach Café’s Todd Strojny displays some air-born athleticism, as he goes up for a kill.

What began as a simple trip to the dentist became a life-threatening barrage of medical problems for Todd Strojny and his family.

The 32-year-old Strojny visited the dentist in July of 2006 to have a cracked tooth removed, but his oral surgeon soon gave him some unexpected, frightening news – he had found a tumor in his mouth and was scheduling him for a CAT scan.

A tall, lanky, rubber-armed athlete who dominates the Northern Door summer volleyball league, Strojny handled the news in his usual understated manner. When he showed up for volleyball the following Wednesday and filled his team in on the news, he did it quietly, assuring his friends it wasn’t cancerous and had little risk of major problems.

Certainly, the news came as a shock to Strojny, a cook at the Sister Bay Café, and his wife Stacie, 28, a longtime employee of the Inn at Kristofer’s, but they took comfort in the bright side of things – the tumor had been detected early, before the tumor threatened their future, which included their three-year old son, Aiden.

But when the specialist sent Strojny for an MRI to get a better look, he found something else. Strojny received the news over the phone. He had a brain tumor.

“I handled it pretty well on the phone,” he recalled. “But after I hung up I looked at Stacie and told her ‘I have a brain tumor,’ and we both lost it.”

A young family just getting settled in their new home suddenly felt the foundation of their future shaking beneath them.

After picking each other up off the floor, the young couple spent the next five hours scouring the Internet for information on the rare tumor, which goes by the name oligodendroglioma and accounts for less than three percent of all brain tumors. Then they told their son “daddy has some bad stuff in his head.”

Strojny continued to work as he prepared for his Nov. 2 surgery to remove the brain tumor. The one in his mouth, the blasted thing that started it all, would have to wait. The brain surgery went well, if something that leaves a deep, hooking scar along your hairline can be said to go well, but the doctors told Strojny he would need to undergo radiation treatments to finish it off.

In the meantime, he returned to work at the Café and arranged a schedule around his treatments with his bosses. Starting in mid-January, for five weeks he would work weekends at the Café, then spend the rest of the week in Green Bay getting radiation treatments at the Vince Lombardi Cancer Center at Aurora hospital.

Sometimes he would take Aiden with him to ease the pressure on Stacie as she balanced work, caring for her son and her husband, and her own fears of the worst-case scenario.

“Our bosses were so accommodating with everything,” he said. “They have done all they could, bending over backwards for us and never saying anything about missing work or anything else.”

The steroids he was prescribed to help him withstand the radiation added 20 pounds to his frame. In June of 2007 Strojny would finally have surgery to remove the tumor in his mouth, the tumor that started a year that tested his mind, his body, and his family. The tumor that, ironically, may have saved his life. Without the cracked tooth and the tumor the surgeon found, which led to the MRI, the brain tumor may not have been found until it was too late.

The mouth surgery left a hole in the roof of Todd’s mouth, severely limiting what he could eat, and it didn’t take long for him to lose the steroid weight. This summer Strojny was back on the volleyball court, dominating, and even returned to the basketball court in July after a year putting his body through hell.

Fortunately, the Strojnys have insurance to help cover the pile of medical bills, but insurance doesn’t cover the countless hours of work missed as they’ve battled the tumors on top of all of the normal stresses a young family faces.

To help the family, Stacie and Todd’s friends have organized a benefit to raise money for the family and are asking people to come out and show their support Oct. 2 at the Sister Bay Bowl.

Strojny said he and his wife are a bit embarrassed about the attention but expressed their gratitude for the community’s support.

“We need to give a very sincere and heartfelt thanks for all of this,” Strojny said. “We know how hard everyone is working on this for us, and it is overwhelming.”

The event gets under way at 5 pm with free Miller Lite and food donated by the Inn at Kristofer’s and the Sister Bay Café. The Bowl will donate the money from the bowling alley for the evening to the Strojnys, and there will be raffles and a silent auction followed by live music from The Nicks at 10 pm. A $10 donation to a fund set up for the Strojny’s is requested.

For those who can’t make it to the benefit, an account has been set up at Baylake Bank for people wishing to make contributions to the fund and can be dropped off at any Baylake location. They can also be mailed to PO Box 166, Sister Bay Wisconsin 54234, attention Mary Jo. Checks should be made payable to Strojny’s Special Account.