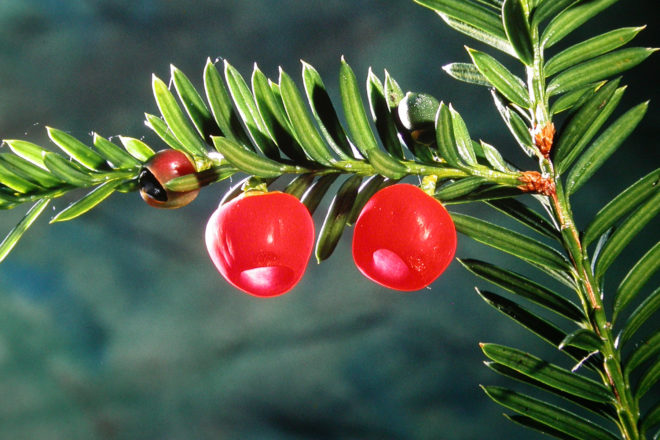 American or northern yew leaves are flat and pointed at the tips. The fruit is a beautiful red contrast to the foliage. Photo by Roy Lukes.

The evergreens’ popularity soars each year with the approach of Christmas. Trees including balsam fir, concolor fir, the white, red, jack and Scots (not Scotch) pines, white spruce and arborvitae are never more sought after than during this special season.

Several other small evergreen plants have been traditionally included in home decorations, wreaths and table centerpieces, plants such as holly and clubmosses. The so-called princess pine is one example of these low-trailing evergreens.

There is a beautiful evergreen whose use during the forthcoming holidays has never been common. Furthermore, and sad to say, this fine plant has been deteriorating and disappearing at an alarming rate. The native plant I speak of is the American or northern yew, Taxus canadensis, often referred to by area people as ground hemlock.

Game managers tell me the plant has been virtually eliminated throughout much of its range in northern Wisconsin, eaten by white-tailed deer. It is only where the deer population is low in northeastern Wisconsin, in unusual isolated pockets of habitat, that these plants are still holding their own – barely.

Small, low to the ground, straggling and scruffy all describe this interesting plant. Throughout early history especially the yew of Europe, Taxus baccata, was associated with cemeteries and death as well as with bow making.

There was a time prior to the use of gunpowder in Europe that yew wood was in great demand because its stiffness and strength made it the ideal wood for the manufacture of bows. Being a very fine-grained wood it was also used in making tool handles and other implements requiring strength and durability.

The northern yew, wide-spreading shrub that it is, seldom grows taller than four to six feet. Its flat, soft, flexible needles are dark glossy green above and yellowish-green below. Unlike the flat needles of balsam fir and eastern hemlock, those on all yew plants are pointed at the tips. They are two-ranked and lie in one plane.

I shall never forget a botanizing field trip with my friend Jim Zimmerman, into the wooded dune area to the south of Kangaroo Lake. This unquestionably was the absolute finest remaining northern yew environment in the upper Midwest.

As we were studying and listing the plants we encountered, Jim asked me if I had ever eaten the coral-red fruits of the yew. Upon hearing my answer, which was “no,” he proceeded to collect several which we promptly relished. They were sweet and good. Fortunately, and quite naturally, we spit the little bony nut-like seed out (one per fruit).

Several days later I had a special delivery letter from Jim warning me to absolutely never eat the seeds along with the fruit, that had I eaten them and had a heart problem, it could have been fatal to consume the seeds!

It dawned upon him, when arriving home to Madison, that he had remembered hearing about the seeds. Quick research confirmed his suspicions. They contain the alkaloid, taxine, which is a heart depressant. Study has also proven that especially the wilted foliage, if eaten in large quantities, is often fatal to cattle. Fortunately the red pulp of the “berries,” technically arils, appears to be harmless. However, I strongly suggest not eating any!

Deer seem to crave and quickly devour the northern yew foliage in areas where they have over-browsed their best food to the point that little else remains. Unless the deer herd is kept in better balance we can expect the yew shrubs to eventually disappear from this region.

Our friend Emma Toft had two northern yew shrubs planted at the front of the old lodge at Toft Point. They had to be completely covered with burlap sacks each winter or would have quickly been eaten to “nubbins” by the deer.

We know of several wooded areas near our home where fairly large stands of yew remain as small stunted eight- to 12-inch tall specimens. Here the deer continuously eat the tops of the plants each winter down to the depth of the snow. Come summer these animals prefer broad-leaved plants, such as maples and dogwoods, and tend to avoid the yews. Little by little these struggling shrubs give in to other more aggressive vegetation and eventually will disappear.

An important discovery in the early 1980s completely reversed the world’s interest in yews – from trash to treasure practically overnight. A molecule proven to slow down or stop a number of cancers by preventing cell division was discovered in the bark of yew plants. The pacific yew, Taxus brevifolia, more of a tree than a shrub, was the major source of taxol, the extremely valuable substance in great demand. Unfortunately eight tons of yew bark is needed to produce about two and one-fifth pounds of taxol.

In early 1993 Bristol-Myers Squibb, which owned the patent to produce the drug, announced that new semi-synthetic forms were being produced. That allowed the halt to the destruction of the Pacific yew by the end of 1995.

The yew shrubs that many property owners in the Midwest use for landscaping their grounds are horticultural forms developed over the years from several species of eastern Asian forms.

We shudder at the destruction of the tropical rainforests and applaud the many efforts, including those of school children and their teachers, to slow it down and to preserve some of the pristine remaining acres. On the other hand, a majority of people are unaware that we have an unusually beautiful evergreen plant – the northern yew – that is also disappearing at an alarming rate, right in our own backyards. My feelings are that, as responsible and caring citizens, we owe it to our county and our state to understand our own native plants much better. We need to live in harmony with them and ensure their survival.