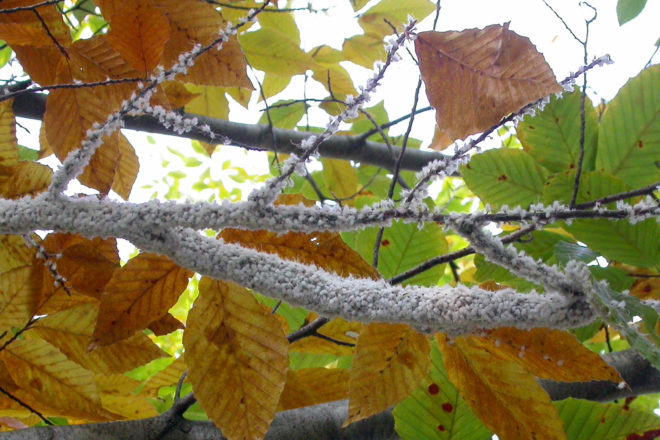 A beech tree branch covered with wooly aphids appears to have white mold all over it. Photo by Roy Lukes.

Years ago one of the world’s most common insects, the plant louse, and a small, inconspicuous butterfly, the harvester, led me to some fascinating lessons in nature. The entire episode could, in a sense, be compared to that famous old essay “Acres of Diamonds” whereby a certain person spent a lifetime unsuccessfully exploring throughout the world for diamonds. Finally, weary, broke and worn out, he returned home to find them in his own backyard. Frequently I have traveled several miles in search of interesting topics to photograph and write about. Finding none I’ve come home to discover them right here within sight of my front door!

A friend and I were hiking down one of the trails in The Ridges Sanctuary years ago when he suddenly called me back to look at something strange. What looked like an eighth-inch thick layer of white mold on the branch of a small speckled alder sapling turned out to be hundreds of minute plant lice packed together – each wearing a coat of fuzzy white strands of thread-like material. It looked like a fungus. We examined the unusual phenomenon momentarily, then continued on our way. 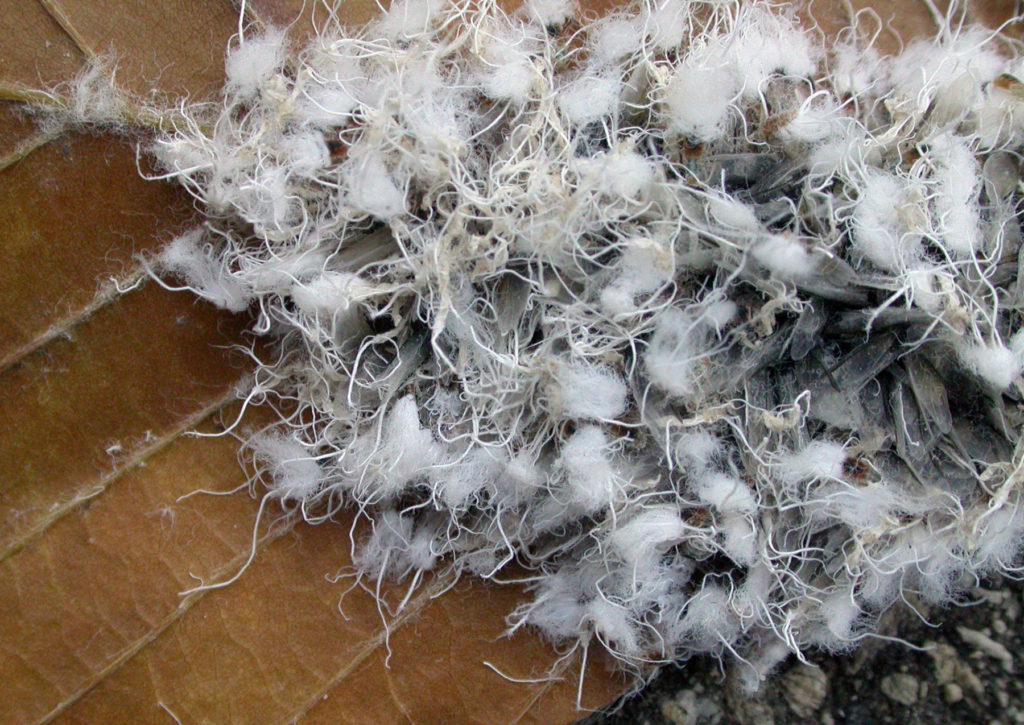 The next morning a phone call came from my friend Bill Sieker, a moth expert from Madison, up for the weekend to continue his serious hobby of moth and butterfly study. He asked me if I had time to see something interesting. Within minutes he was at the door and couldn’t wait to get into the house to show me his “find.”

He opened up an old cigar box and there they were, hundreds of those diminutive aphids covered with frilly white fibers. “Did you ever see wooly aphids?” he asked. What a stroke of luck that I could answer yes. They were identical to those my friend discovered on the trail.

It wasn’t long before Bill and I were out in the field searching for more aphids. What amazed me was to learn that Bill’s primary objective was to find certain caterpillars that actually feed on the wooly aphids. In fact the only carnivorous caterpillar in all of North America is that of the harvester butterfly.

The wings of this orange-brown creature have black borders and spots and its wingspan is only about 1 to 1.25 inches. Its scientific name is Feniseca tarquinius, the species part being from the Roman tyrant Tarquin and apparently reflects the voraciousness of the caterpillars toward the colony of wooly aphids. It is normally found in eastern North America west to Minnesota.

The adult butterflies, as well as laying their eggs on the masses of wooly aphids, consume aphid honeydew. It so happens that the countless tiny sticky spots on your car’s windshield, after you’ve had it parked under a tree for a while, are sugary deposits of honeydew, or in other words aphid excrement resulting from the myriad plant-sucking creatures living on the leaves or twigs above.

One of my favorite episodes in nature involves ants faithfully and fearlessly tending their “herds” of aphids on the red osier shrubs. The aphids in this case are blue-gray and about one-sixteenth inch long. Should you disturb the colony and get too close to the ants they will bite you viciously and drive you away. Can you imagine one tiny ant farmer driving a huge hulk of a person away from his prized herd of lice? It is the excess droplets of sugary aphid excrement over which the ants are so jealous.

The majority of species of aphids are so petite and well camouflaged that people seldom notice them. In fact it is frequently the ants in attendance that betray their presence. Aphids have an unusual pair of tube-like organs situated on their sixth abdominal segment, which no other insects possess. These openings emit gas from some species and also a thread-like waxy substance from others.

Their life cycle is very interesting and quite complex. It begins with the fertilized egg. Some ants actually remove these fertile eggs from plants and store them in their underground chambers during the winter. The eggs hatch in spring and the aphids are brought back up to their host plants as soon as they have leafed out.

The aphids reach maturity on their host plants in two to four weeks. They are now called stem-mothers and are usually wingless. These aphids will reproduce parthenogenetically (without sex) until fall. Eggs hatch in the parent’s body and the young are born alive. Each female gives birth to three to seven young daily for three or more weeks. Twelve to 20 generations occur through the plant’s growing season. 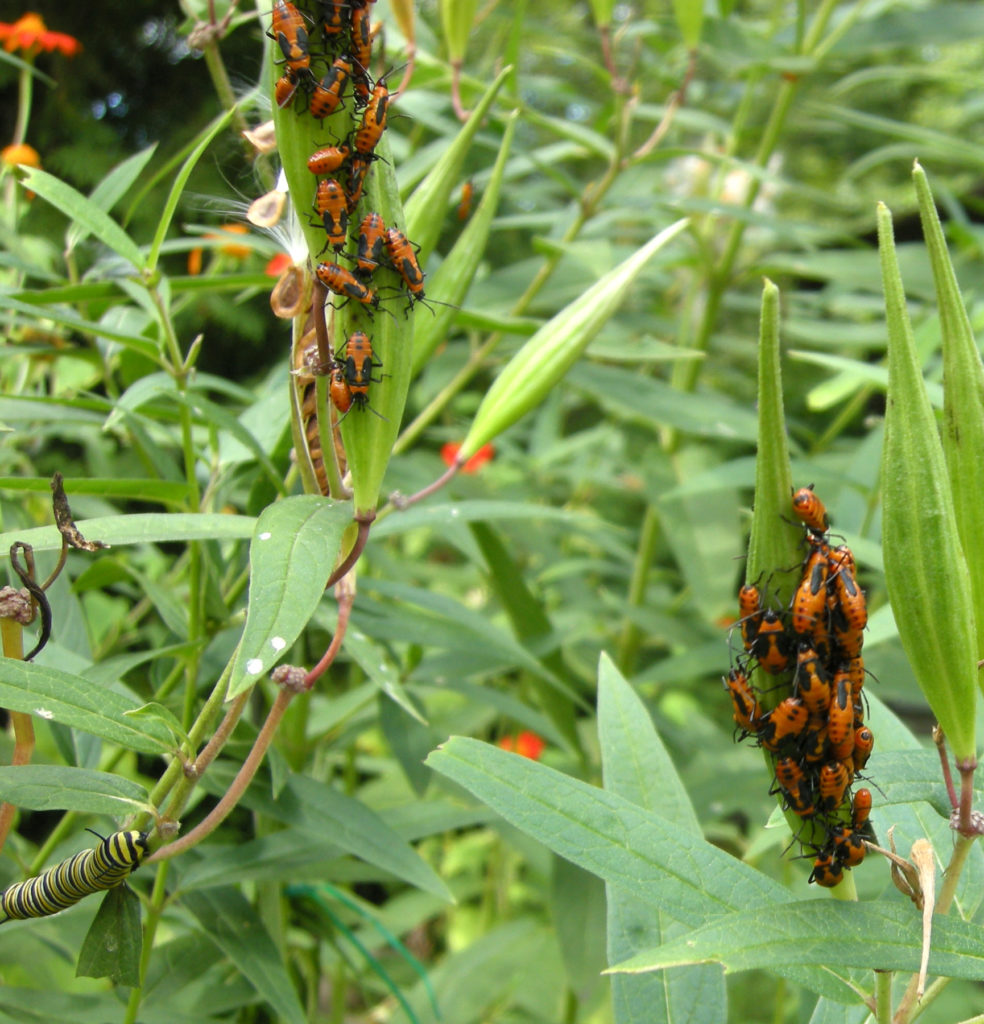 This swamp milkweed has many nymphs of the milkweed bug in various stages feasting on the seed pods. Photo by Charlotte Lukes.

Some may be wingless sexual oviporous females. These will be joined by winged males that were produced on the secondary host plants. After mating the females lay fertile eggs for the first time, which will survive the winter and begin the new lifecycle in spring.

Another interesting insect was discovered in our front yard consuming seeds of the tall swamp milkweed. Each seed pod was crowded with emerging nymph milkweed bugs. These are wingless creatures that feed on the seeds and continue to develop. They will go through five instars before becoming adults. They are true bugs with the scientific name, Oncopeltus fasciatus.

Milkweed bugs are piercing and sucking insects and are primarily deep orange with small black spots. Black areas become larger once they reach the adult stage when they will overwinter in the soil. They appear to overwhelm the plant but are more a nuisance than a threat to the milkweed.

You may be surprised to learn, in spending more time in your own yard, that countless interesting dramas in nature are being acted out daily. In fact, who knows, there may be acres of diamonds waiting for you!

On Sept. 24, 9:30 – 11:30 am, join the Mushroom Hike with Charlotte Lukes at Newport State Park. Join Door County’s mushroom expert as she leads hikers through the fascinating world of fungi. Lukes has been studying wild mushrooms for more than 40 years and she loves to share her knowledge through classes and programs throughout Door County. Hikers should meet in the Nature Center.