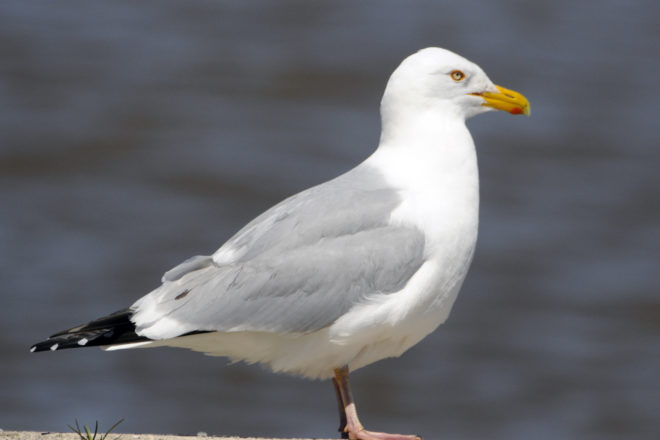 This herring gull shows its adult plumage, pink legs and feet and the red spot on the lower bill. Photo by Roy Lukes.

The most embarrassing letter I ever received was written to me by the U.S. bird banding chief, Willet T. Van Velzen, following my 1963 bird banding. It was my first full year of doing bird banding in my spare time, a non-paid licensed hobby, and obviously I had much to learn.

During the spring of 1963 I trapped and banded 430 purple finches about 10 miles northwest of Green Bay near Mill Center. Naturally in my end-of-year reporting I included the age and sex of every one of the finches. They were all AHY (after hatch year) birds and the purple were males and the brown-streaked the females.

Back came a short snappy letter from Chief Van Velzen saying in part, “Congratulations Mr. Lukes! You have become the first U.S. bander to successfully sex all purple finches. How did you do it?”

I read the letter, swallowed hard, my ears became “purple” and immediately I realized I had goofed badly. Thumbing through the thick banding manual I quickly learned that all purple finches can’t be sexed. Yes, the purple ones are males but the brown streaked birds could also be second-year males as well as young or adult females. The male purple finches do not become purple until at least into their third year of age. Live and learn!

Another bird that goes through interesting subtle color changes before attaining its adult breeding plumage is the so-called “seagull.” In that so many spend the greater part, or all of their lives away from the sea leads us to simply call them gulls. By far the two most common species on the Great Lakes and elsewhere on the North American continent are the ring-billed and the herring gulls.

Obviously they are most associated with shore areas and also thought of as having webbed feet, long wings and very harsh voices plus a wide taste for food. 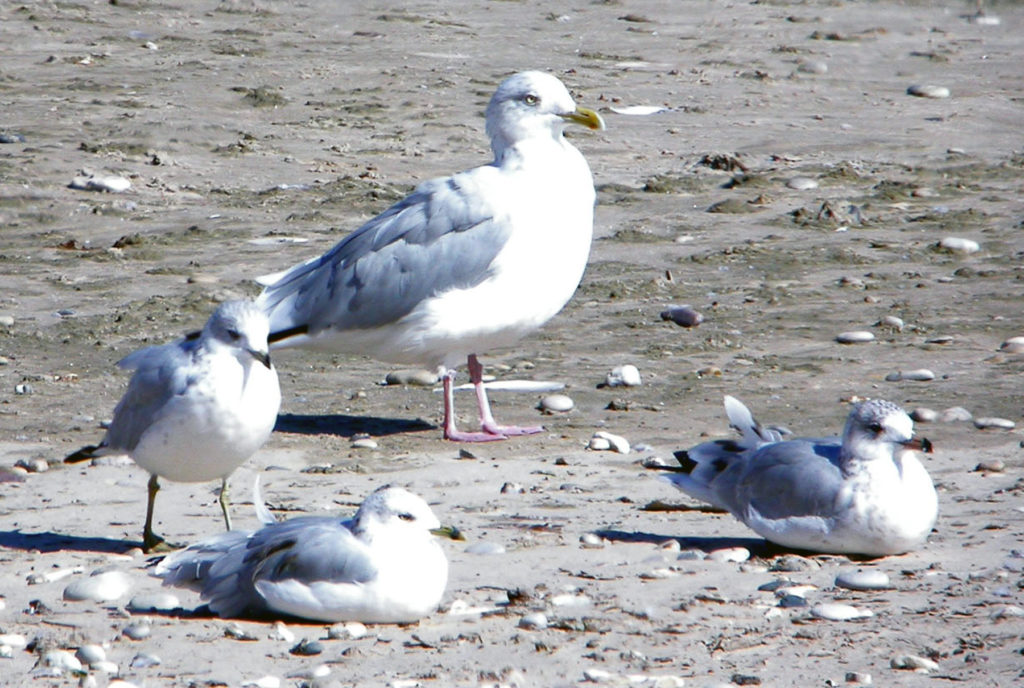 Both the herring and ring-billed adults have white bodies and tails, gray mantles (top of wings and back), and a yellow bill. Other than the herring gull being about seven inches longer than the ring-billed and having a distinctly lower voice, both can look surprisingly alike from a distance.

Seen from close range there are several distinctive differences to look for on the adults. Herring gulls have pink legs and feet, and the front part of the lower bill has a reddish spot.

An adult ring-billed gull has yellow-green legs and feet and its yellow bill sports a dark ring, surrounding the beak near the tip.

In terms of gradual plumage changes leading to breeding condition of these two gulls, the herring is said to be a four-year gull while the ring-billed is a three-year bird. That will be their ages when they begin to breed.

The pink-legged dark birds with black tails and black bills you see now are most likely herring gulls in their first winter plumage. Keep in mind that all birds, gulls included, become second-year birds on January 1st following the year they were hatched.

By the second winter their body feathers will have become somewhat lighter, the tips of both mandibles (the beak) will be black and their brown tails will sport a wide irregular black band.

Come the third winter, herring gulls’ body feathers will show more white, speckled with tan, their upper wing feathers and back will be gray, the black tail band will have become narrower, the tail a bit lighter and the tip of the bill will show yellow to the front of the black section.

When their fourth year arrives they will have taken on their white plumage, have solid white tails, pearl-gray mantle and gray wings with black tips speckled with white. The lower mandible of their yellow bill will have the red spot which, when feeding young in the nest, becomes a target at which the babies aim their food-begging lunges.

Ring-billed gulls in their first winter will already sport upper gray wing feathers and backs, their body feathers will be speckled with tan and the tips of both mandibles will be black like the second-winter herring gulls. The tips of their white tails will have a narrower well-defined black band and their legs and feet will be light grayish to greenish, not the fleshy pink of all ages of herring gulls.

Bear in mind that in winter both the adult herring and ring-billed gulls will show tan speckling on the upper parts of their bodies, more so on the herring than the ring-billed, but their distinctive adult beaks and leg color, plus size difference of the species, will enable you to easily identify them.

Remember, too, that ring-bills are typically “snowbirds” and most will have migrated, with a few exceptions, southward by mid to late November. But then it’s time to begin scoping the harbors and shorelines for the rare winter gull visitors, namely the Iceland, glaucous and ivory gulls.

Largest of the three is the glaucous, about 27 inches, and its overall pale appearance is easy to see. Its under-wings are all white, lacking the black tips of the herring and ring-billed gulls, and its mantle will be a light silvery gray.

The smaller Iceland gull, 22 inches, is also very white and may show only hints of black in its wing tips. Adults of both the Iceland and glaucous have yellow mandibles with a lower red spot and their legs and feet are pink. The main features to watch for are the overall white color, their size and wing tips.

Those who have seen the short-necked, stocky ivory gull with its black feet and short black legs claim that it is quite pigeon-like, about 17 inches long. The bird, as its name implies, is very white overall and its black bill is yellow at the tip.

Another gull that lives along the Lake Michigan shores and has been seen sporadically in all seasons since the mid-‘90s is the great black-backed gull. It can be as large as 31 inches and its mantle is noticeably blacker than the gray of the herring.

If you think you know gulls you’re in for a “gull darn” interesting challenge in getting to identify them in all of their first three and four years of fascinating plumage changes.