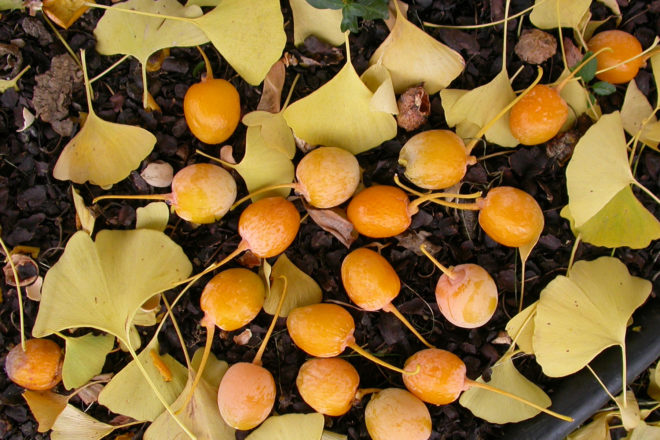 The fruits of a female gingko tree are scattered on the ground with some leaves. Photo by Roy Lukes.

Can you imagine a tree that has been described as being weird or “way out,” a fossil tree that is not related to any living family or group in the entire vegetable kingdom?

These trees are the sole survivors of a family, rich in species and very widely distributed in both the northern and southern hemispheres during the time when dinosaurs roamed the earth. It was during the Carboniferous Period, the Age of Reptiles, that gingko trees flourished roughly between 135 to 163 million years ago. Fossil gingko leaves have been found from the Arctic all the way to the South Temperate Zone.

Experts think it was possibly the glaciers that brought the gingko trees to the brink of extinction. They did disappear completely from the North American continent, Europe and western Siberia, but fortunately survived in small numbers in the milder climate of portions of the Orient that were not swept over by the enormous ice masses of the glaciers. It was the temple gardens of China that housed the living descendants of the gingkoes for centuries and where they were held very sacred.

These fascinating trees were introduced to Europe in 1730, to England by 1754 and brought to America in 1784. Among those trees first brought to the United States is one that still grows in Fairmont Park in Philadelphia.

It was during the fall of 1955 while teaching in the junior high at Shorewood Hills School near Madison that I saw my first gingko leaves. I think a few of my students thought they would throw a “curve” at me by including some of the exotic, little-known gingko leaves in their leaf collection projects. 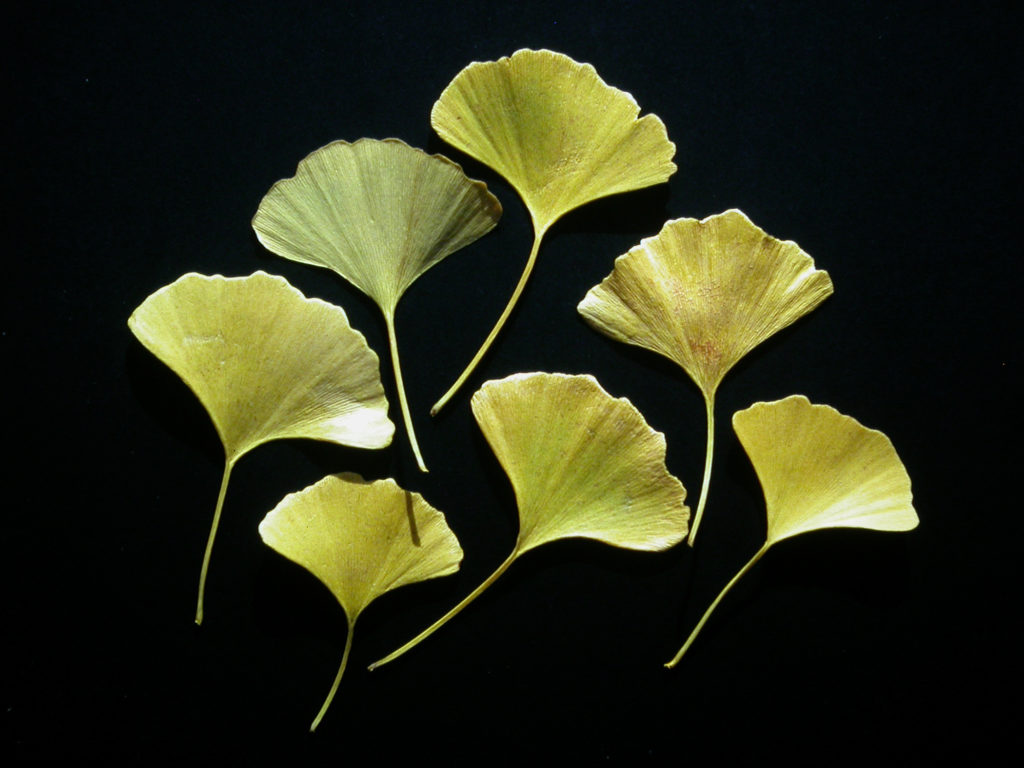 Gingko leaves are beautifully different from most other tree leaves. Photo by Roy Lukes.

Finally in the fall of 1971, when I was courting Charlotte, I saw my first live gingko trees growing along the street in front of the Watt’s Tea Room and Store on the east side of downtown Milwaukee. We suspect that it was the extraordinarily beautiful shape of the gingko leaf that inspired the Watts people to adopt it as the store’s symbol.

A number of years ago our friend, Bill Schuster, told us about the beautiful gingko tree growing next to the municipal parking lot along the west side of the old Door County Courthouse in Sturgeon Bay. Now we know where we can park our car while using the public library across the street and give a quick hug and then “shake hands” with what has become one of our favorite trees.

True to form, this young gingko has a continuous central column and, in overall shape, resembles a balsam fir or spruce. We visited the tree in early fall to find that its rather light, soft green leaves were still clinging quite tightly and that none had turned to the butter-yellow color for which they are so famous. Our first visit to the tree later that fall found most of the leaves already on the ground. One of the gingko’s traits is that it sheds its foliage very quickly once it has changed color from green to yellow.

Many years ago Charlotte and I presented a program at the Paine Art Center and Arboretum in Oshkosh and were very impressed by several large gingkoes growing near the edge of the parking lot. As I recall one or more of those specimens was a female. It so happens that gingko trees, being dioecious, are either male or female. The yellow male catkins, containing the pollen, develop in clusters on the short shoots or spurs at the same time that the small leaves are emerging in spring.

The female catkins are produced in groups of two or three rather long-stalked, tiny green acorn-shaped fruits. The wind does the pollinating as happens on many trees. It is quite fascinating that fertilization is accomplished by motile, free-swimming sperms much as occurs in the ferns, an entirely different plant group containing spores rather than pollen.

What is of great interest to botanists is that gingko trees appear to be intermediate between ferns and conifers, even though they are usually listed in tree books with the conifers (gymnosperms). Some of the plant scientists believe the gingko is a living link between the conifers, and especially the more primitive plants including tree ferns and cycads.

The fruits, technically referred to as drupes, such as cherries, are small, plum-sized, and about one-inch long. The thin outer fleshy layer covers a pointed oval nut somewhat the shape of a plum pit. These nuts are from one-half to three-fourths inch long and have a smooth white shell enclosing a soft kernel that is oily and has the flavor of almonds. They are sold for food in China and eaten especially at banquets, weddings and social gatherings. The gingko holds the record of being the oldest cultivated nut tree in the world. 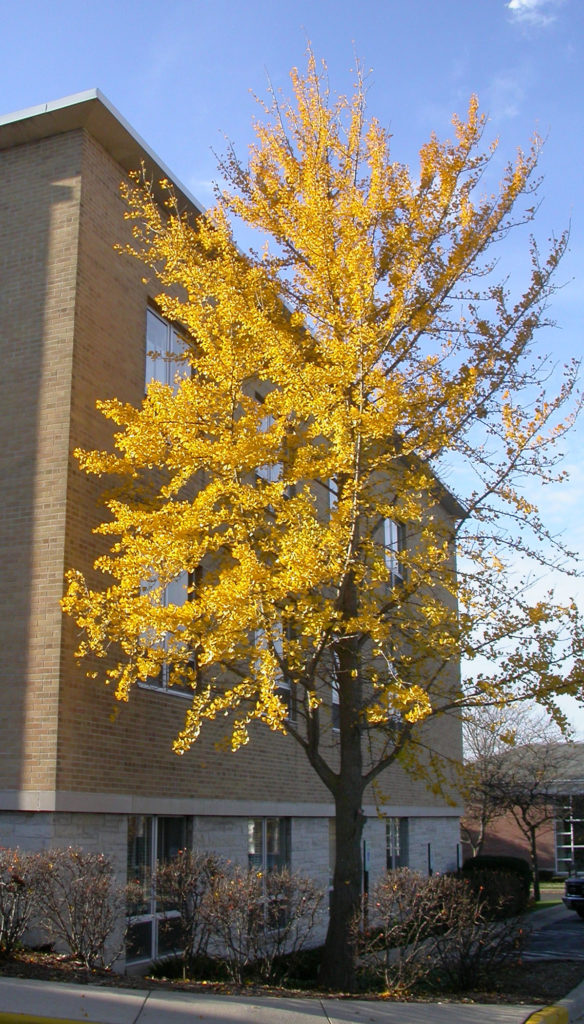 Soon after the fruits fall to the ground the yellow-orange fleshy outer covering bursts, emitting a terribly putrid, offensive odor. Those “scientific” people who have closely examined the rotting outer covering say it tastes and smells like rancid butter. A good nurseryman will strongly advise against planting female gingko trees on your property. The genus of this tree, Gingko, means “silver fruit” in Chinese.

It’s the lovely fan-shaped leaves of the tree that have attracted so many admirers. The two to three-inch leaf has no midrib but numerous, branching, somewhat parallel veins. They are bright green when young, a dull green at maturity and a gorgeous clear yellow in fall. A deep notch in the center of the wavy rounded edge divides most of the leaves into two lobes, hence the species name of biloba (by-LOW-ba).

These trees are the answer to a city park department’s prayer. They are extremely tolerant of smoke, dust, insect pests, wind, hard-packed soil and other typical city conditions invariably damaging to many other species of trees.

Plant some male gingko trees on your property. Welcome these “living fossils” into your lives. They’ll repay you in many ways.