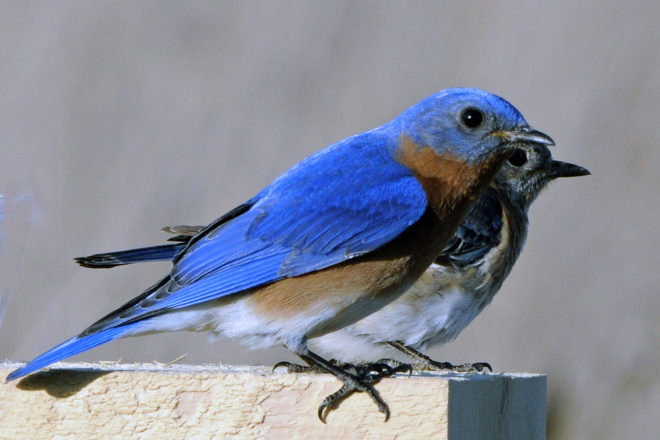 A mated pair of eastern bluebirds sits atop one of the nest boxes. Photo by Roy Lukes.

One of our most favorite signs of spring laced the air in our woods early on a recent morning. A male cardinal, perched near the very tip of a tall basswood tree sang his heart out – “CHEERrr, CHEERrr, WHITcheer, WHITcheer” – trying to impress his lady love nearby. A few days earlier a male white-breasted nuthatch delicately fed his partner a few hulled sunflower seeds at our large platform feeder, perhaps indicating to her what a faithful mate and provider he will be.

We bought our present property, consisting of mostly young mixed hardwood trees with a small number of conifers, in December 1977. Our hopes were that eastern bluebirds would nest in the several boxes we put up along the western edge of the property the following spring. All that accepted the boxes were tree swallows, an excellent species but not the bluebirds we were hoping for.

It wasn’t until 1982 when we were able to begin building our new home and, much to our great joy, the electric power lines which were brought in to the building site soon also attracted some bluebirds. Finally, in the early spring of 1983, a few of our nest boxes were taken over and used by the bluebirds. Mown areas adjacent to the boxes were important, enabling the birds to perch on the power lines above, scan the ground below for insects and fly down to catch them.

Bluebirds need two to three acres of land per nest box to find enough food for raising their young. All their food is obtained on the ground, unlike tree swallows which get their food in the air. The swallows can fly as much as four miles from their nest sites to find food. Placing nest boxes too close to each will deter bluebirds but the swallows don’t mind.

Our own bluebird trail increased modestly through the first 20 years we lived where we now are. Gradually we asked nearby property owners if we could place some of our nest boxes on their property. The boxes nearly always are set along a road and fence line close to where the roadside mowers or the land owners kept the grass and weeds cut quite short, in nearly all cases beneath overhead power lines. The boxes are set up often close to open fields and within around 50 feet, more or less, of trees to which the fledgling bluebirds can fly after leaving the nest box, on their “maiden flights.” If the baby bluebirds land on the ground after leaving their nest box they are doomed. They must fly to a nearby tree, where the adults will continue to feed them for the next week while they strengthen their flying muscles and learn how to get their own food.

Agreement with our project has become highly favorable with the owners. Within a few years we had erected and were weekly monitoring 48 boxes, all within a three-mile radius of our home.

We drive around the countryside and see so many bluebird boxes that have been improperly erected on wooden posts which are open invitations to climbing predators including raccoons, opossums, house cats, squirrels, snakes and others that will eat the eggs and/or young bluebirds in the nests. Mounting nest boxes on wooden posts is simply a terrible mistake. Far better, in order to give the bluebirds greater chances of successfully raising their young is to use metal electric conduit posts, PVC pipes or strong metal baffles on the posts.

Several years ago Dr. Kent Hall came from his home in Stevens Point to Sturgeon Bay to present a bluebird nest box program. It was well received and brought more members to the Bluebird Restoration Association of Wisconsin (BRAW) and gave encouragement to many people to start their own bluebird trails. Having attended several state annual meetings of the BRAW group, Charlotte and I became aware of their hard work and dedication toward increasing the bluebird population in our state. We decided to become the Door County coordinators for the group and have been eager to help individuals and groups learn more about maintaining a bluebird trail and especially the highly important job of monitoring the boxes weekly and keeping good records. 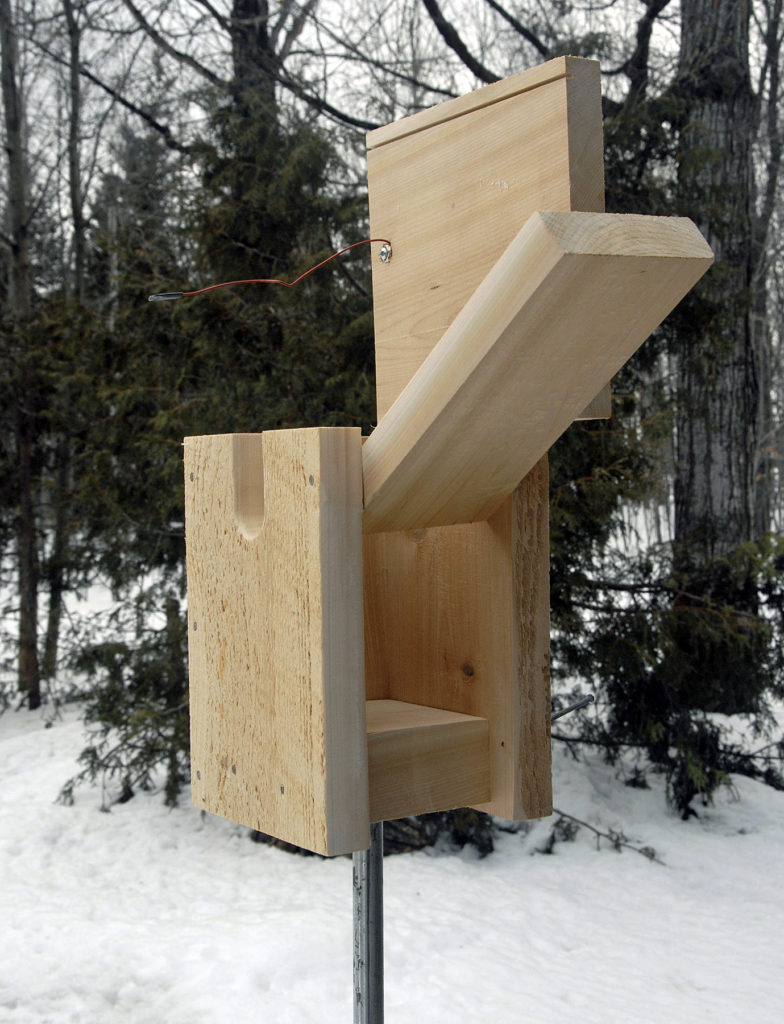 Several different kinds of bluebird nest boxes have been used in our state and county with the NABS (North American Bluebird Society) plan being the most widely used; it has a side opening for both monitoring and cleaning.

The plan Charlotte and I, along with quite a few other Door County bluebirders, have found to be very good is the K-style (Kentucky) box. The original plan called for only a top opening, which is ideal for monitoring but difficult for cleaning at the end of each clutch of birds. I improved the plan by making both a top opening for monitoring and a side opening for easy cleaning, quite simple to do.

Should you be interested in joining BRAW, the annual dues are $20 per person or a family membership. As a member you will receive four excellent newsletters that are filled with valuable information on how you can improve your nest boxes and trails. Their web address is braw.org. BRAW provides helpful information to attract bluebirds to your nest boxes. They tell you how to learn to think like a bluebird.

The Ridges Sanctuary in Baileys Harbor conducts a nest box building program each spring. This year Charlotte will be there to help explain the best box placement and monitoring techniques to ensure good bluebird success. BRAW booklets on all the important information needed will be available for sale. The workshop this year will be March 18 at 10 am at the Cook-Fuller Center on Hwy. 57 at the north end of the village. Pre-registration is required through the Ridges Sanctuary by calling 920.839.2802 or visiting ridgessanctuary.org.

Become a dedicated bluebirder and someone up there will like you!