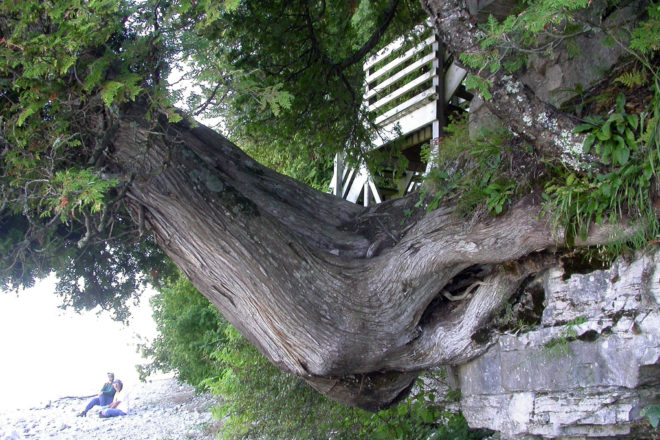 A giant cedar tree on the north side of Rock Island, part of the vertical forest, has its roots imbedded in the dolostone. Photo by Roy Lukes.

The thought of viewing planet Earth from outer space eons ago, before life existed on this 8,000-mile-wide sphere, boggles the mind. Undoubtedly one of the potentially visible landmarks was a feature that today is called the Niagara Escarpment.

Appearing like a gigantic bull’s-eye, measuring approximately 300 miles from its west edge to its east edge, it was formed as a massive tropical coral reef teeming with life, a so-called bioherm. This circular ring of primarily coral animals existed in the region where northwest Africa lies today, about 10 degrees south of the equator. Eventually this huge ring of stone, along with the surrounding land mass, would over millions of years, slowly be moved northward by the action of plate tectonics to where it exists today.

Four of us stood atop the escarpment along its western rim recently, marveling at the fact that, during its formation under water, this tropical reef did not experience water temperatures below 68 to 70 degrees Fahrenheit, which allowed the corals and other sea creatures to live and grow. 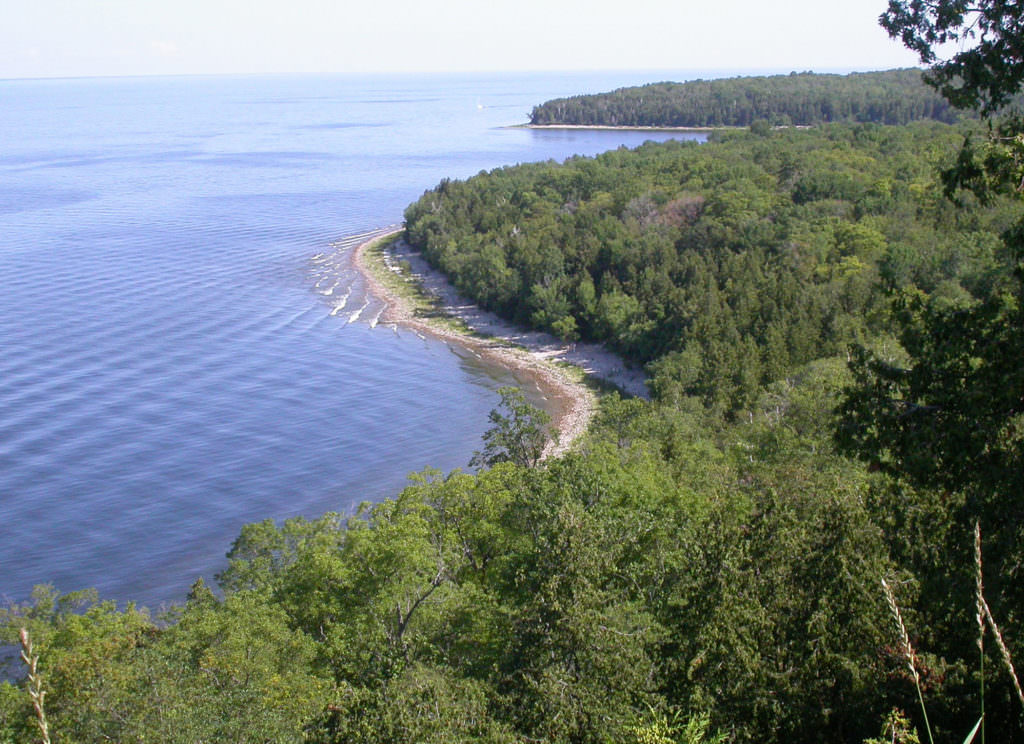 A favorite view of many people is Peninsula State Park’s west shore as seen from Sven’s Bluff. Photo by Roy Lukes.

This steep sheer wall of dolostone, formed over many millions of years, is a virtual geology textbook, often containing fossils that include brachiopods (BRAY-kee-o-pods), corals, bryozoans and cephalopods (SEF-o-lo-pods).

Don’t think for one moment that this is the northernmost limit of fossils of these warm-water creatures. Coral fossils are common as far north as the Hudson Bay region. One of the best places in the Midwest to see this story come alive is in “The Third Planet” exhibit hall at the Milwaukee Public Museum. The plate tectonics theory, the drifting apart of the continents, is especially well documented and explained.

One prominent feature of the vertical cliff we inched past during our exploring was the many fractures in the Karst bedrock. Undoubtedly some of these stress cracks can be traced to the immense weight of previous glaciers followed by the rebounding of the earth’s crust after the glaciers melted.

A vertical forest of arborvitae trees (eastern white cedar) clings precariously to the dolostone, their roots grotesquely and with uncanny precision reaching for the thin cracks into which to grow. In some cases, the slightest vertical opening in the bedrock will be solidly plugged with cedar roots.

Surely the growth expansion of these roots contributes considerably to the continued and deepening splitting of the rock layers. The seepage of water downward, along with seasonal freezing and thawing, expanding and contracting, works unceasingly in breaking apart the rock that weighs approximately 165 pounds per cubic foot.

What an exhilarating experience it must be flying over the western portion of the Niagara Escarpment, from south of Chicago northward to the Garden Peninsula and eastward over Upper Michigan. I should think it would be especially fascinating to view from above the massive dolostone quarries near Chicago, those south of Lake Winnebago, the large one at Valders, the Sturgeon Bay quarry, that on Big Summer Island to the north, the large outcropping at Burnt Bluff on the Garden Peninsula and the quarry of high quality dolostone on Drummond Island.

The word dolostone is preferred by geologists because the majority of the Niagara Escarpment is made up of stone that is roughly 46 percent magnesium carbonate (dolomite) and 54 percent calcium carbonate (limestone). Take “dolo” from the word dolomite and “stone” from the word limestone, put them together and you’ve got dolostone. I’ve also seen this bedrock referred to in geology textbooks as dolomitic limestone, but I strongly prefer dolostone. It’s a good word that has down-to-earth meaning!

“Reading” the winter landscape leads one to more deeply appreciate the overall beauty of our state. The fact that Northeast Wisconsin has depositional landforms, very visible and abundant, produced only by glacial ice along with its melting action, makes the scenic vistas all the more fascinating.

Resolve during 2017 to learn more about the landscape and the plants and animals of your county and state. Some of the splendid vistas and the fragile Niagara Escarpment should also be classified as highly endangered natural resources and receive the highest priority of preservation – for all people.

What a choice place for living we have! Let’s keep it that way!