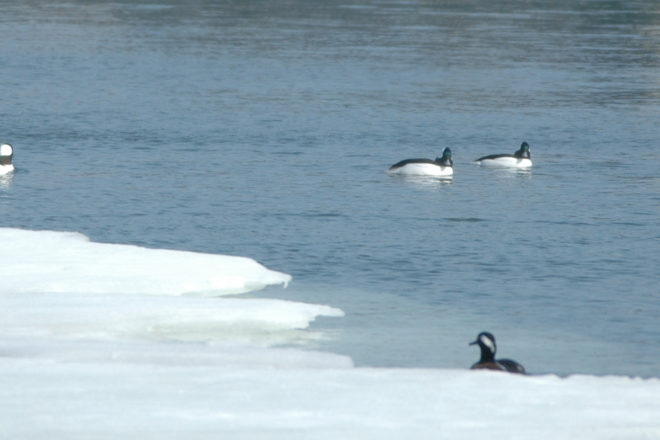 Bufflehead ducks and one goldeneye, at the far right, are typical winter waterfowl in this area. Photos by Roy Lukes.

A statement used in advertising in the past, “You’ve come a long way, baby!” could apply very appropriately to the annual Christmas Bird Count (CBC) which has become so popular throughout this continent over the past 116 years. These yearly early winter counts are sponsored by the National Audubon Society and the U.S. Fish and Wildlife Service. The counts were begun by a group of interested and very concerned nature enthusiasts in 1900.

They were motivated by Frank Chapman, curator of ornithology at the American Museum of Natural History, and begun in protest to the original Christmas Day “slaughter.” This heinous annual event, on Christmas Day of all days, had so-called “sportsmen” out east vying for the title of who could shoot and kill the most animals – bird or mammal, practically any wild creature that moved – on that special day when millions of people were celebrating a great spiritual birth. The bird counters wished to publicize conservation rather than the destruction of wildlife and eventually won out. 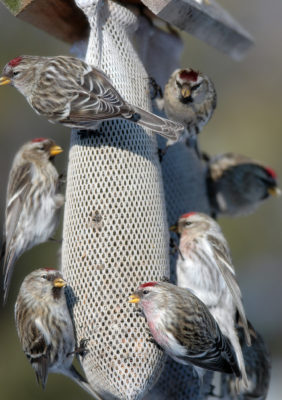 Common redpolls, eating thistle seeds, can appear in great numbers in some winters.

That first CBC had 27 dedicated birders doing 25 counts from the east coast to the west coast and Canada. Now more than 60,000 people participate throughout our country, Canada, Mexico and Central America. What’s ideal is that anyone can participate, whether looking out windows at birds coming to feeders to groups out in the countryside searching for and tabulating birds along roadsides, fields, woods or at shores and on the water. Each count has a compiler and, ideally, individuals or small groups are assigned to count in a specific zone within a set 15-mile diameter circle.

Data from last year’s counts can be viewed at the Audubon Society’s website (audubon.org). Wisconsin usually has about 80 counts done during the regulated period from Dec. 14 to Jan. 5. Useful information is gathered from these citizen science counts that help to indicate trends in expansion or reduction of the range of bird species, record greater flights or irruptions of species into the state like snowy owls, great gray owls or redpolls, and help ornithologists follow fluctuations or dramatic changes in bird populations.

Some hardy observers start their count before dawn to listen for owls. Yes, being able to identify birds accurately by voice is allowed during these surveys. Weather can play a vital part in the success of a count. Low winds and peaceful conditions allow for more bird activity and make it easier to hear them. During times of strong winds many birds will take cover and stay low and often out of sight. A few inches of snow cover will make seeing the field birds a lot easier and greater snow cover will bring more birds to peoples’ feeders.

Contrary to normal assumptions, the CBC’s are not contests to see who can amass the most bird species in a day. Actually, negative reports are also of considerable value to the long-range studies of wintering birds. However, I must admit that we take each count very seriously and try to not miss any birds. Experience has taught us that three or four birders, riding together in one car and carefully scanning the terrain and trees in all directions don’t miss a lot of birds. They also tend to greatly intensify the pleasure of seeing some rare species.

We maintain that when a person can look over records of a CBC taken 58 years ago (Roy’s first one was in 1958 and this year will be Charlotte’s 45th) and clearly recall some rather minute but exciting details, these are extremely memorable and worthwhile experiences. What’s so important is documenting these events. Ours are written, in rather extensive details, in a CBC notebook to which we frequently refer.

Our high total CBC to date was the Sturgeon Bay count of Dec. 15, 2001 when 72 species and 14,497 individual birds were tallied. One point is certain; it helps to have several of the field parties equipped with spotting scopes, especially those scanning the shore areas. It is during a count day when winds are very calm and there has been very little ice build-up along the shores that high waterfowl counts can be accomplished. Every few years a certain species has an unusually high total, like the 224 American robins seen during the Sturgeon Bay count in 1998.

Canada geese, specifically the giant race, have been the high-count species of many CBCs. The large flocks entered the Door County scene between 25 to 30 years ago. Our record so far, established on the 2011 Sturgeon Bay count, was 6,168 Canada geese. Bear in mind that the giant race is non-migratory. They don’t fly any farther south for open water and food than they have to. What you are seeing now are the adults and those young hatched during this past summer, plus those hatched in this area during the summer of 2015. This coming spring the young of 2016 will fly north on their so-called “molting migration,” spend the summer far to the north molting, feeding and then they will return to Door County in fall where they had been fledged the year before. This pattern accounts for the gradual huge build-up of the giant race that we and many others are experiencing.

The 2015 Sturgeon Bay count set three high records for redhead duck (758), bald eagle (15), and downy woodpeckers (85). In 2013 the Sturgeon Bay count had the most juncos at 685 with only 201 last year. Songbirds that come to our area from the far north will only appear if their food source in Canada is depleted. Droughts and weather extremes play a big part in where birds have to travel to find the resources they need to survive.

Watch for future announcements and plan to help with one or more of the counts. This year’s Sturgeon Bay count will be done on Dec. 17 and the Southern Door count will be on Dec. 18. Call Charlotte Lukes at 920.823.2478 if you are interested in helping. It is a day of great satisfaction and a way to meet new friends. You’ll be glad you helped – and so will the birds!