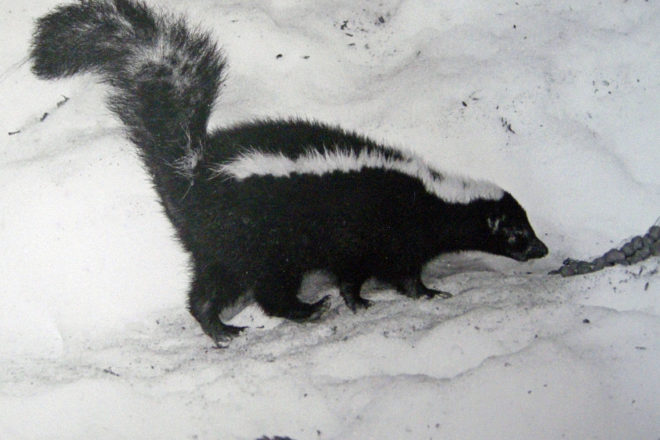 This skunk, venturing out in winter, has its tail up, ready for any enemy it may encounter. Photo by Roy Lukes.

The unmistakable odor of a skunk has greeted me every time I’ve walked out to the mailbox within the past few weeks. He or she has taken up winter residence in the culvert pipe beneath our driveway entrance very close to the mailbox. Both ends of the pipe are somewhat closed up and apparently there is a good amount of dried leaves inside the skunk’s abode to give the silky-haired creature a bit of insulation and warmth.

At this very moment the skull of one of these ubiquitous animals, resting on my roll-top desk, gazes and “grins” down at me as I write. Several years ago some students in a class we were teaching in the field found jawbones containing the gleaming white teeth of an unknown mammal.

Eager hands reached downward, carefully searching the grassy area, and soon we located all of the parts of a complete skull. My wife’s training as a dental hygienist enabled her to make several observations about the teeth, all of which were intact, and in a few moments we had pieced together the lower and upper parts of the skull.

Now the guessing game began. Some said it was a small dog while others thought it might be a cat. But it wasn’t until we returned home, consulted a few reference books, and were able to identify our specimen as a skunk – a northern plains skunk.

Known as the pole cat to Southerners and as the woods pussy to others, the Potawatomi called him Shi-kog. Add an “o” to this word and obviously it comes out as “Chicago,” but please don’t ask me what the connection might be!

Here is an animal, the most widely distributed carnivore in Wisconsin, that man has come to belittle, shun, despise and deplore all because of prejudice and ignorance.

Clearly our attitude is as plain as black and white! How often have you heard someone refer to another person as a low-down skunk? What an insult this is to one of the most gentle and inoffensive animals known to man.

Have you ever been lucky enough to examine a living skunk closely? While part of a group of students at the Wisconsin Audubon Camp 59 years ago, I was pleased to be in the company of a de-scented skunk. This silky-furred critter was calm, deliberate and perfectly amiable, as long as you, too, were gentle and slow moving. But if you made a sudden move, he would wheel around with lightning speed, lifting his tail that was slightly drooping at the tip, in a stern warning. Then, should you lunge at the helpless little animal, his tail would stiffen upward, he would stand on his front legs, raise his rear end and “let you have it” –all within a split second – and all in vain.

From 300,000 to more than 600,000 striped skunks inhabit our state, but only a small number of spotted skunks have been seen and trapped, and those only in the western and southern parts of Wisconsin. Skunks, being constitutionally slow creatures and masters of their kingdoms, are native only to the Americas. They are about the size of a house cat and are members of the weasel tribe. Because they are heavier in the rear and have shorter front legs, they walk with a waddle-like movement. Their steps are short and their back and front tracks frequently overlap. These tracks appear large because skunks walk on their palms and heels as well as on their toes.

I recall seeing extensive skunk damage on a golf course where the fairway bordered a woods and the turf was soft and spongy. The skunks learned that the white grubs or larvae of Junebugs (beetles!) were abundant there and, with their long sharp front claws, had themselves a fest for several nights in a row. Interestingly, about half of their food is said to consist of insects, and they are especially fond of grasshoppers, crickets and grubs.

The remainder of their diet includes wild fruits and berries such as grapes, ground cherries and nightshade, as well as snakes, frogs, toads, gophers, rats and mice. They are known to consume turtle eggs and a small number of eggs of ground nesting birds. Their preferred-foods list clearly indicates that skunks are extremely beneficial to people.

The skunk’s rather putrid stench, by the way, comes from the chemical butylmercaptan, a sulfur-alcohol compound. I’ve heard of several ways to get rid of the “perfume” including using tomato juice and even turpentine.

We usually guess at the abundance of skunks in any given year by the number of dead ones we see along the roads. These somewhat sluggish lumbering animals, on their journey to find food or a good winter den, don’t even fear cars.

Come late October and early November, these black and white masters of advertising will den up for the winter. Some are even known to share a den with a woodchuck, very likely entering the ready-made quarters after the unsuspecting woodchuck is asleep. The skunk, however, is not a true hibernator and will occasionally venture out in search of food on mild winter days when the snow is not too deep. Last winter’s mild weather in the Upper Midwest had them out and about on several occasions.

Naturally, a friendly wild skunk – as a matter of fact any over-friendly wild animal – must be regarded as extremely dangerous because it is a potential carrier of rabies. But don’t do a backward flip if you should see one. Be assured it is not out to “get you.” Rather, it will do its best to avoid you. (Do you suppose they detest the odor of frightened humans?)

One just has to respect, in many ways, so small an animal with so large a reputation!