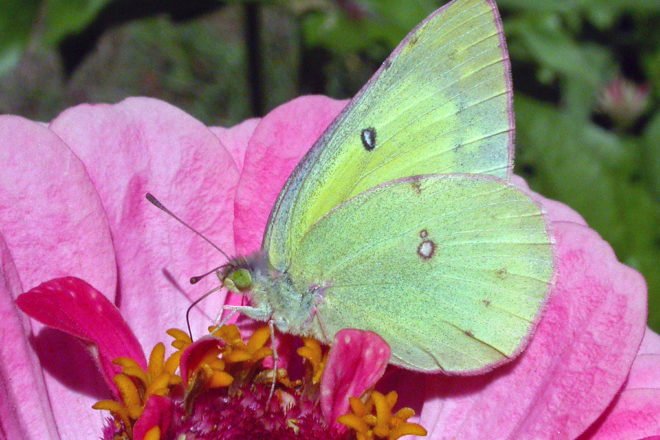 A clouded sulphur butterfly feeds on a zinnia blossom. Photo by Roy Lukes.

The sulphurs and the whites flashing sunshine in their wings have ushered in September. There are no other butterflies in the entire northern hemisphere as abundant as these easily recognized creatures of sunny days.

Depending upon where you live the common sulphur butterfly may go by different names, including the clouded sulphur and the mud puddle butterfly. This is one of several species, along with the swallowtails, for example, that frequently “puddles,” as the lepidopterist would say. There doesn’t even have to be visible water for them to puddle, or gather, by the hundreds.

We recently watered our front flowerbeds and by late afternoon, the soil still being damp, dozens of common sulphurs were congregating there. With patience and very slow movements you could actually see tiny droplets of water dripping from their “backsides.” I would assume the butterflies were obtaining both minerals and moisture from the soil.

It’s easy to tell the males from the females. Both sexes have wide dark borders on the upper wing surfaces, but those black borders of the female contain light spots within the black zone, well separated from the yellow or orange-yellow ground cover.

Something has happened during the past 125 years or so to add considerable confusion to the identification of the sulphur butterflies. A different species of the South, the orange sulphur or alfalfa butterfly, gradually moved northward and began to interbreed with the commons. Today you might call it a “duke’s mixture.” To compound the confusion it is quite common for there to be albino or white females of both species. This hybridization presents challenges (and headaches) to the lepidopterists, those who study moths and butterflies.

If you think you have a common sulphur butterfly in hand, look on the underside of the hindwing. There should be a reddish spot with a silvery center.

It is quite likely that the very name butterfly was derived from the buttery appearance of the sulphur butterflies, as common in northern Europe as they are here. The yellow pigments of most of the sulphurs are built up from waste products within the insect. It will be a simple matter to find a dead sulphur. Place it in a white saucer containing a tablespoon of water and another of diluted ammonia. Most of the yellow will dissolve, leaving the wings nearly colorless.

Their lifespan is ephemeral, a few weeks at most. The encircling mating flights are easy to locate and watch. Eggs are laid on the host plant, either clover or alfalfa but preferably white clover. The green caterpillars feed and grow for about three weeks before forming their chrysalids. Adults will emerge in approximately 10 days. There are usually at least three broods here during a summer and the chrysalids of the third generation will overwinter, the adults emerging the following spring.

A relative, the cabbage butterfly, is also on the wing now. This plain white butterfly is no friend to the gardeners. Its eggs are laid on members of the mustard family, including radishes, Brussels sprouts, cabbages, turnips, kohlrabi and broccoli.

The cabbage white butterfly was accidentally brought into Quebec, Canada, around 1860 and quickly spread throughout North America. They were first seen in Wisconsin in 1879. With most of their natural enemies left behind in Europe they have proliferated here. It is one of the first to emerge in the spring and can be on the wing until the first hard freeze in fall.

It is also easy to sex the rather drab white cabbage butterflies. The male has one black spot on each forewing while the female has two black spots. 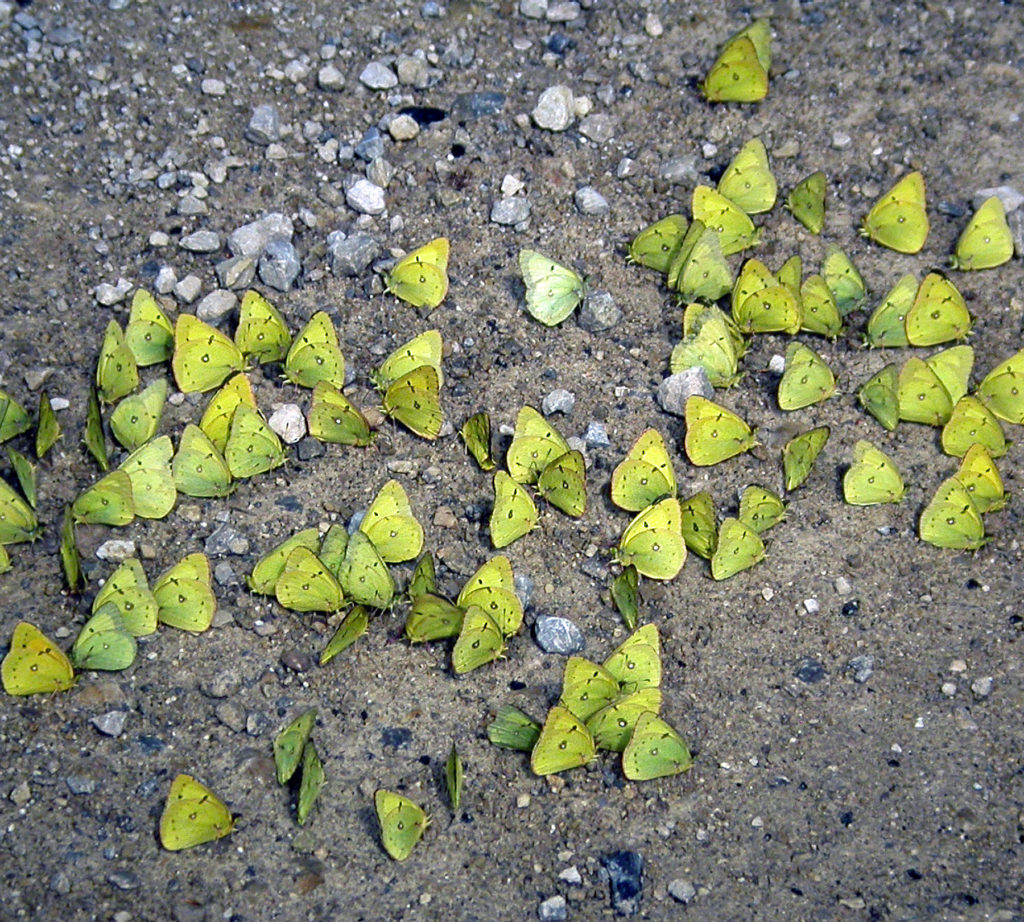 The grouping of many sulphur butterflies seeking minerals and moisture in the soil is called puddling. Photo by Roy Lukes.

Prior to the arrival of the cabbage butterflies in North America, now the number one butterfly here in population, a native white butterfly called the mustard white was very common. In fact experts claim that in the early days it was the most abundant species in eastern North America.

Gradually the cabbage butterfly replaced the mustard whites, which retreated to less desirable sites including the mountains and shaded forests. The mustard whites of early summer have very distinctive dusky veins, or marbling, that is lacking in the cabbage whites. The second generation of summer is not quite as clearly marked as the first. The flight of the mustard whites is closer to the ground and at a slower pace. Don’t expect to find this uncommon creature in open fields or gardens.

Mustard whites lay their eggs on rock cress, or sand cress, Arabis lyrata. The Ridges Sanctuary, having a good population of sand cress along sunny trails within the shaded forest, is a perfect habitat for the beautiful mustard white butterflies.

Varying temperatures from spring into fall affect the color and size of the whites and sulphurs. The cold weather forms of spring and fall tend to be smaller than those of mid-summer.