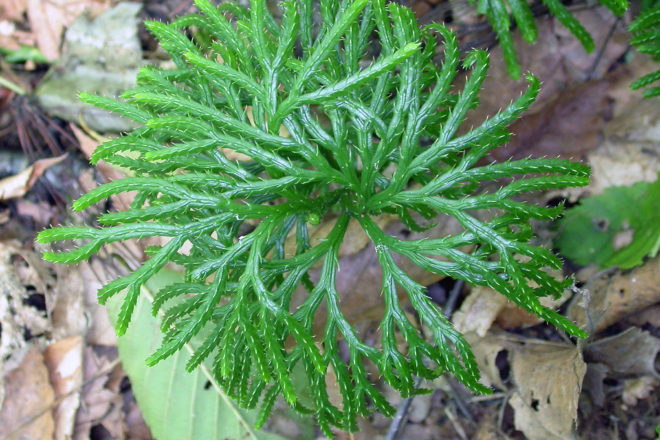 When is the last time you were in the forest of Lilliput? Charlotte and I could very well have been there several days ago at Whitefish Dunes State Park. The beauty of the small plants such as the fungi, mosses and ground pines brought us first to our knees and finally to our bellies.

It was a gorgeous fall morning with migrating Canada geese, thrushes and Myrtle warblers on the wing, along with some dragonflies and even one of the anglewing butterflies, presumably a comma butterfly.

The mushrooms captured Charlotte’s attention while the clubmosses, miniature forests of them, soon caught my eye. This is a very small group of plants with few close relatives in Wisconsin, really an easy assemblage of plants to learn.

One would have the best luck looking for the tiny quillworts in far northern Wisconsin along shorelines or even in the water of inland lakes. Dr. Carl Taylor, formerly with the Milwaukee Public Museum, was one of the country’s quillwort experts. 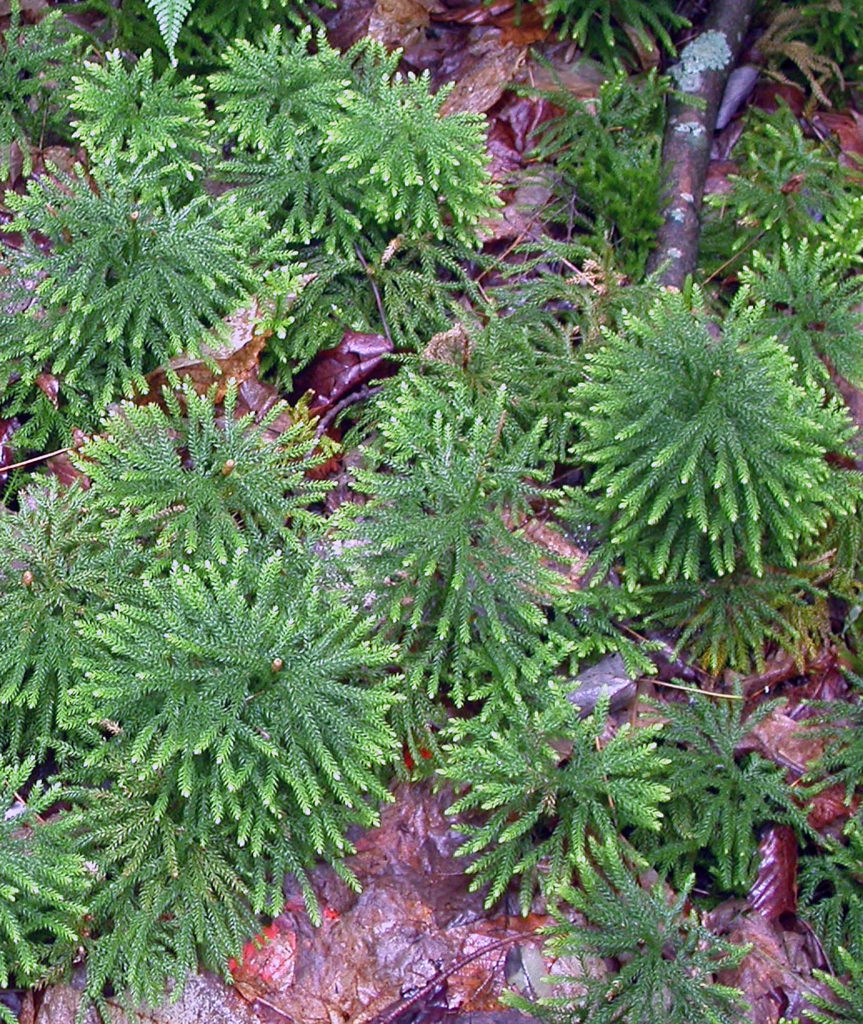 Spikemosses, very small creeping plants, are pretty much restricted to southeastern and northeastern Wisconsin with one species, the northern spikemoss or selago-like spikemoss, being registered on the endangered plant list of our state. One of the few places it grows is in the Ridges Sanctuary. The more common meadow spikemoss has a little wider range but is nevertheless very tiny and difficult to spot.

Many of you know the so-called princess pine, which is one of the clubmosses. Several species resembling miniature pine trees could pass for the princess pine, including the running groundpine and the flatbranch groundpine. The reason I prefer to not use the “princess pine” name is that there is a flowering plant called the prince’s pine, and people confuse the two.

All clubmosses are non-flowering and reproduce from spores rather than seeds. Like some of their allies, the ferns and horsetails, the spores don’t develop directly into new plants but rather into very tiny male and female plants almost microscopically small. They in turn unite and grow into a mature clubmoss. This is called the alternation of generations, a very fascinating growth process.

Years ago spores of clubmosses were gathered in quantity and sold as lycopodium powder. Lycopodium (lye-co-PO-dee-um), Greek for wolf foot, is the generic name of this small group of plants. The powder is highly flammable due to its finely divided oil droplets. It was used in the manufacture of fireworks, for flash photography, to coat pills so they wouldn’t stick together, to lubricate surgeons’ rubber gloves and as an antiseptic dusting powder.

Only about 13 species and that many subspecies exist on the entire North American continent with around 100 species throughout the world. Wisconsin is fortunate to have nine species and several subspecies. Even though some are called groundpines they are not even remotely related to pines. All pines are woody and reproduce by seeds whereas the clubmosses have no cambium and reproduce by spores.

The clubmosses are low plants often connected by rootstalks. Their leaves are flat, scale-like and borne around the stem. Occasionally the leaves on the upper and lower sides of the branches are smaller giving them a flattened appearance, such as on the flat-branch groundpine.

Some species bear their spores in tiny yellow clusters, called sporangia, in the axils of the leaves, which may be like foliage leaves or sometimes smaller and light yellowish at maturity. A few, like the running clubmoss (Lycopodium clavatum) and the running groundpine (formerly Lycopodium, but now Diphasiastrum complanatum) have conspicuous clusters of long, thin yellowish cones called strobili. One could refer to these as spikes of modified leaves that contain the spores within their axils.

Two of my favorites are the flat-branched groundpine or tree clubmoss, L. obscurum, which I photographed at Whitefish Dunes, and the running groundpine. Both resemble small evergreen trees with the latter being rather irregularly branched and somewhat bunched together. The tree clubmoss is more open and fanlike in appearance. For many years people picked great quantities during late fall to be made into green wreaths for Christmas decorations. 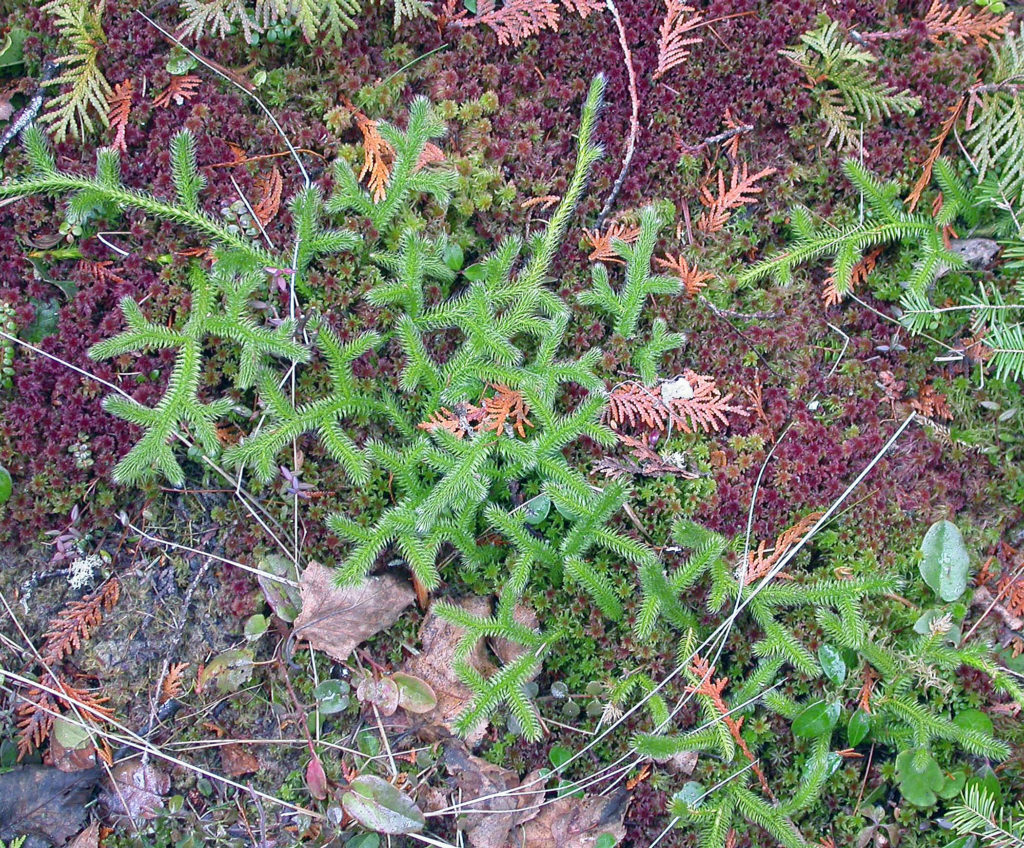 Running clubmoss has a vine-like manner of growth rather than as a small tree. Photo by Roy Lukes.

Unfortunately this plant is extremely slow growing. Most often those who make use of these plants merely pull them out – roots and all. One yank and they’ve destroyed about 30 years of growth! I’ve seen instances where all traces of clubmosses have been eradicated from entire woodlots.

I realize that landowners are practically free to do as they wish with their own native plants. They can even enjoy them where they grow! One of our goals in life is to attempt to lead as many people as we can into the realm of understanding and appreciating native wildlife. Only through this approach can we be assured that future generations will also be able to rejoice in their awareness of the thousands of plants and animals, including the clubmosses, that can play such a meaningful role in their lives.

Get down on your knees in the woods and gaze into the “Forest of Lilliput.” The beautiful clubmosses will lure you into returning often.