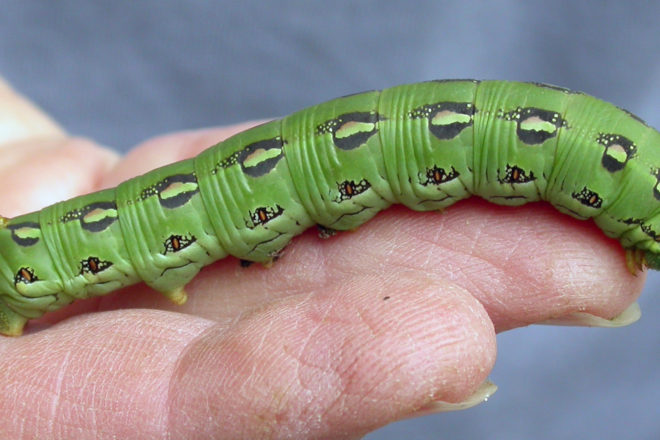 The hornworm of the white-lined sphinx moth has distinctly different markings than its tomato hornworm cousin. Photo by Roy Lukes.

While Roy Lukes died at the age of 86 on June 26, his nature columns will continue to live on in the Pulse with the help of Roy’s wife, Charlotte, who has agreed to continue providing work from Roy’s extensive archives. For that reason, the column will include both their names.

Late July and August nights will bring out more of some of the fastest flying of all moths, the hawkmoths. In fact it is their long, narrow, strong wings and speedy flight that has brought about their name.

Collectors have been fascinated with these often-large interestingly marked and colored insects and consequently there is a great deal known about them and their distribution.

A more common name of this large group of moths is the sphinx moth. Undoubtedly many of you have picked their larvae from your tomato plants and destroyed them. Disturb these so-called tomato hornworms and they’ll rear up looking like a miniature Egyptian sphinx, hence the name of sphinx moth, the adult last stage of development.

I had a call a number of years ago from a local resident telling of a huge mysterious creature whose description over the phone sounded pretty much like one of the large hawkmoths. It did turn out to be one of the largest, the great ash sphinx, also called the chersis or pen-marked sphinx. Its pen-marked name results from the thin, black, wavy streaks on its forewings. From wing tip to wing tip it measured four and three-fourths inches.

Unlike the five-spotted hawkmoth larvae that sports eight L-shaped lines on each side of its light green body, that of the great ash sphinx lacks white markings on its sides. Most larvae of hawkmoths or sphinx moths are some shade of green, obviously a design in nature to afford them excellent camouflage from their predators. 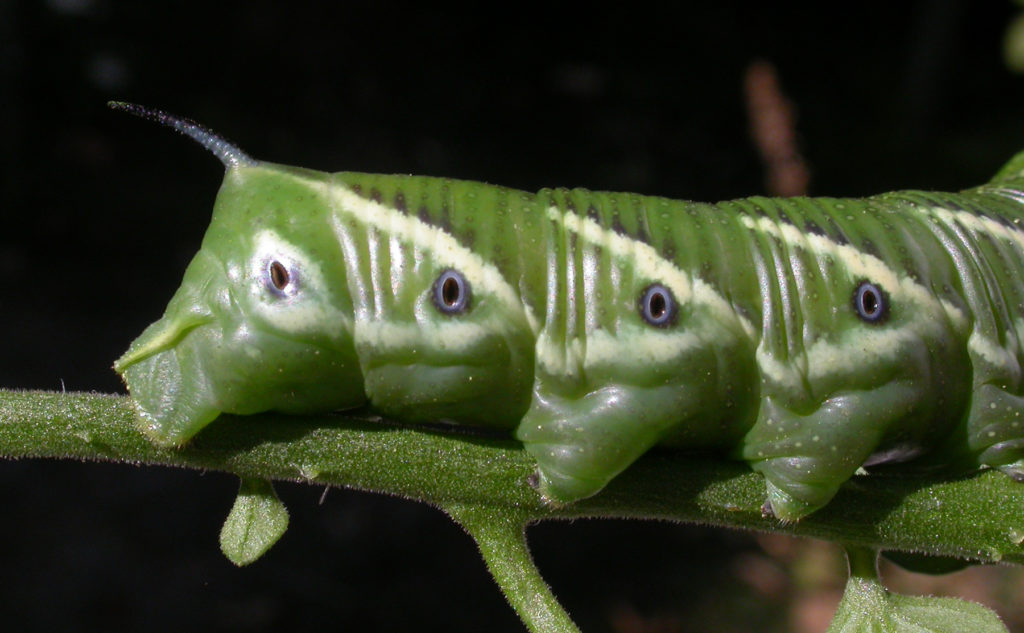 Here is the south end of a northbound tomato hornworm showing its soft black-tipped horn. Photo by Roy Lukes.

Some of the larvae, including the tomato hornworm, do have a thorn-like projection near their rear end (on the eighth abdominal segment). Touch it with your finger and it is really quite soft and totally harmless, unlike its fearsome appearance.

Three hornworms are quite similar and are found in our area: the tomato, tobacco and the white-lined sphinx. The tomato has the L-shaped white markings and its horn is green with black edges. The tobacco hornworm’s white markings are straight and not L-shaped while the white-lined sphinx hornworm does not have white markings. It has a series of oval black spots with pale greenish orange centers on the upper body with smaller orange and black spots along the lower half of each segment.

One of the neatest performances we saw at a Birch Creek concert some years ago was that of a large hawkmoth. We marveled at its swift flight as it swooped among the musicians on stage, especially in the percussion section, causing them to duck over and over. I fully expected the timpani player to start swinging a mallet at the speedy flyer. Fortunately for the orchestra, and the moth, it flew out through the open side of the barn into its world of darkness.

Should you be doing some digging in your garden near tomato plants later this summer and uncover what appears to be a strange, brown-varnished, segmented “shell” having a long jug handle at one end, you have come upon the pupa of most likely the tomato sphinx moth.

In other words one of the tomato hornworms, the larva of the tomato sphinx moth, ate its fill of tomato leaves, reached its extreme size of three or more inches, crawled to the ground and dug its way in where it immediately pupated. The following year it would have emerged in mid-summer as an adult tomato or five-spotted sphinx moth.

Some of the hawkmoths have unusually long proboscises, often more than two or three inches in length, designed to enable them to obtain nectar from the extreme reaches of some rather deep horn-shaped blossoms such as lilies, petunias and nasturtiums.

I recall reading about an experience Charles Darwin had somewhere in the tropics. He came upon a flower, most likely an orchid, having a nectar spur more than five inches long. Darwin predicted that someday a moth having a proboscis equally as long would be discovered – and it was! 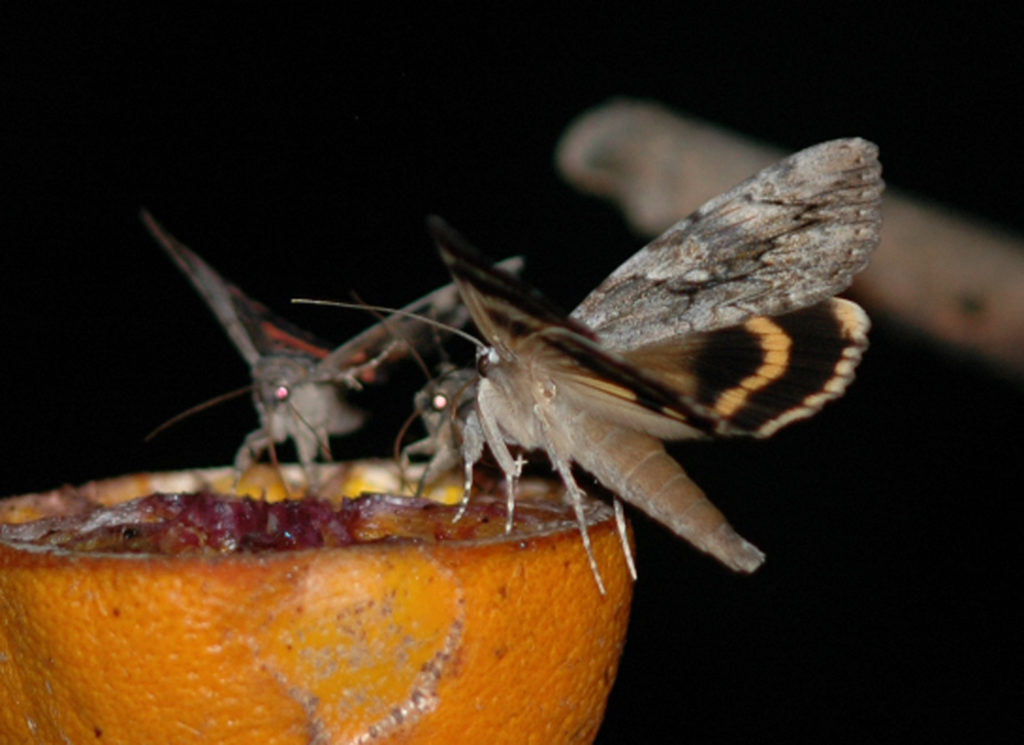 Underwing moths on this oriole orange at night reveal their hidden orange and black colors. Photo by Roy Lukes.

Many moths reveal their most intense beauty only when on the wing. For example, it is the hindwings of the large genus, Catocala, (called underwings) that have the dazzling colors including yellows, oranges and pinks. During the day when moths are at rest, perhaps on the mottled barks of trees, their dull brown and gray forewings completely hide the more colorful underwings.

Purchase a moth field guide, such as Peterson Field Guide of Eastern Moths, or a very good beginning book such as the Butterflies and Moths Golden Guide from St. Martin’s Press and learn to really enjoy and appreciate the harmless, non-biting, stingless moths.

Take heed of what the English writer Robert Southey wrote many years ago:

“Sorrowing we beheld the night come on;

But soon did night display, more wonders that it veil’d;

And darkness made their beauties visible.”