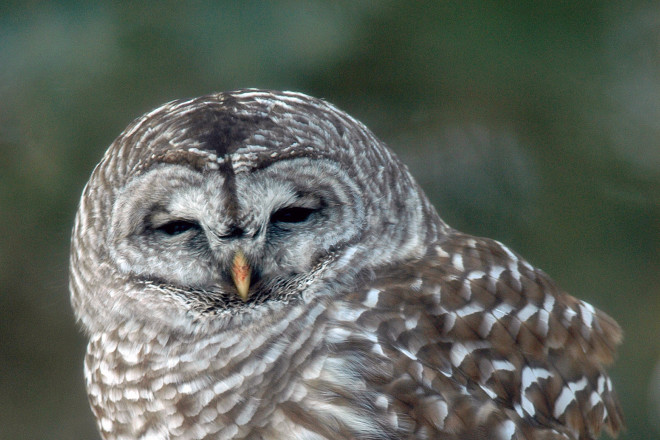 This barred owl sits on a fencepost and patiently waits for a mouse or vole to show up for dinner. Photo by Roy Lukes.

One of the owl songs we are patiently waiting to hear is that of the barred owl. You may make your own phonetic analysis of what it is “saying.” My interpretation is, “Who cooks for YOU – who cooks for YOU?”

Invariably the owl many people refer to as the hoot owl or swamp owl in this region turns out to be the barred owl. Their song is higher in pitch than the great horned owl’s “who WOOO, who who who.”

Some of our closest experiences with barred owls in past years have been during this season, especially when the ground was still covered with hard, crusty snow and food-finding for these raptors was extremely difficult. Invariably they had been lured to our buildings and bird feeding areas simply because this is where the mice and voles, the barred owl’s primary prey species, are to be found during darkness.

What a sad facial expression the barred owl appears to have, especially its large dark eyes absolutely begging for sympathy. However, it has been said that this is a perfect bird version of the “wolf in sheep’s clothing.” The bird is a killer, and therein lies one of its greatest problems – its mortal enemy, people.

When game hunting is in full swing, there are undoubtedly a fair number of barred owls being shot – especially by squirrel hunters – in spite of the fact that all owls are legally protected in Wisconsin and many other states. A flock of clamoring crows will frequently lead the curious gunner to the huddled, harassed owl. Naturally the crows will make a hasty getaway while the barred owl becomes the target of the “plinker.”

People, the busy, large-brained, enterprising hominids, have had considerable influence (much of it bad) on virtually every form of life on this planet, including owls. Unfortunately, people have the ability to mold and change the environment to suit their needs.

Throughout history trees have been replaced with human development. Wheat, corn oats and soybeans have taken the place of woodlands and wetlands. The ax and the plow have been the undoing of the barred owl through the years.

Cleaner farming and more food production, increased use of pesticides to decrease the number of insects and rodents, fewer fence rows, and more drained swamps and other wetlands have all contributed to the decreasing number of barred owls and other owls as well.

A few years ago, a barred owl we had a chance to study from close range was live-trapped because it was becoming a problem at our friend’s bird-banding station. The barred owl was killing and eating the smaller saw-whet owls that had been captured in the mist nets for banding and study. Later the barred owl was transported and released in a distant area.

A junior high school science class in Michigan a number of years ago lucked onto a large concentration of long-eared owl pellets on the ground in a thick stand of evergreen trees. These pellets consisted of undigested animal remains, such as bones, teeth and fur that the owls regurgitated.

With the expert guidance of their teacher, the students meticulously took the several dozen pellets apart and identified most of the prey victims. It was conclusively discovered and proved that those long-eared owls were of great benefit to the surrounding farmers as evidenced by the huge quantity of rodents the owls were devouring.

In central Connecticut, where red-backed pine mice were thought to be absent, these small rodents were finally discovered because skulls of their species turned up in the pellets of barn owls roosting in a college belfry in Middletown.

Owls have a distinct advantage over mammals in that they can fly considerable distances to find food. This is one of their saving graces. But there is one thing you can be sure of: Owls will not eat themselves out of business.

If I could have one wish come true, it would be that people learn more about the many kinds of wildlife and strive to coexist with them. Study the plight of the spotted owl, a close relative of the barred owl, native to the deep, old-growth woodlands of the northwestern states. Many of the small number of surviving owls live in publicly owned forests (yours and mine), and private logging interests were really messing up this owl’s chances for survival.

I predict that people’s ability to get along with their fellow man will gradually improve as they learn to live in better harmony with the land and its wildlife. Perhaps you and I would have sad looks on our faces too if we were barred owls.