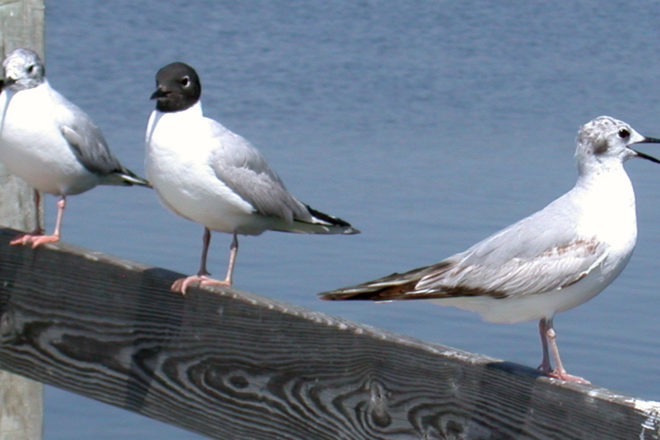 Three Bonaparte’s gulls show the difference in the black-headed adult and the young on the right with a whiter head and dark spot behind the eye. Photo by Roy Lukes.

A very authoritative bird book states simply and to the point that, “Gulls nest on the ground…” This is not entirely true. The black-headed Bonaparte’s gulls nearly always nest in small fir or spruce trees in the boreal (far northern) forest. Indeed they are an exception to the rule. Let’s say that most gulls nest upon the ground.

Every year throughout much of May into early June large flocks of a thousand or more Bonaparte’s gulls migrate along the bay and lake shores of eastern Wisconsin on their way to their summer nesting territories midway into Ontario and northwestward to central Alaska.

Upon first hearing and seeing these lovely birds one has a tendency to think terns. Not only do they have a somewhat shrill, strident call, but they also have a rather bobbing ternlike flight. Being one of the smallest gulls to frequent the Great Lakes at 12 to 14½ inches (compared to 25 inches for the well-known herring gull), they are also very agile and light on the wing. They are downright fun to watch.

Adult Bonaparte’s gulls have entirely black heads, deep pink to red legs, black bills and the white body and gray mantle so typical of many gulls and terns. Their mostly white wing tips, top and bottom, with a narrow black border are a good field mark and also make for an extremely beautiful flashy flight.

Second-year birds lack the black head. They have what appears to be a dusky ear spot, like a second eye on the side of their head. Also very evident is a black stripe across the tip of their tail. Second-year Bonaparte’s gulls may often mingle with nesting colonies of common terns. Perhaps it is there that they learn their chattery ternlike calls.

Gradually the young Bonaparte’s gulls’ heads will become blacker and by autumn they will have attained their adult plumage. The adult birds, during their post-nuptial molt, will lose their black head plumage and will also sport the dark ear patch until early next spring when again they will take on their breeding plumage that will include the black head feathers.

The scientific name for the Bonaparte’s gull is Larus Philadelphia. Larus is Latin for seabird. Apparently the first birds were described scientifically in the Philadelphia area by a French zoologist, Charles Lucien Bonaparte, who lived for a time in the City of Brotherly Love. He was a nephew of Bonaparte I, which accounts for the bird’s common name.

Nests of these gulls in the north have been located anywhere from five to 20 feet up, primarily in black spruce trees or in balsam firs. Their breeding habitat is usually near a muskeg lake or pond. Twigs, grass, moss and lichens are used to construct the nest. Three buffy gray to buffy green eggs hatch in approximately 24 days.

What active, graceful birds they are as they move in loose flocks searching for food. Each downward wing stroke appears to lift the bird slightly upward giving it the bobbing ternlike flight. Many insects, small fish at the water’s surface, crustaceans and marine worms make up their diet.

It is a well-known fact that the breeding ranges of various bird species gradually change from year to year and century to century. Kumlien and Hollister, Wisconsin, zoologists at the turn of the previous century, wrote in 1903, “In 1880 a few (Bonaparte’s gulls) were said to breed on Chambers Island, Green Bay, and we saw on some small islands in Big Bay de Noquet (Big Bay de Noc), Mich., a number of nests like pigeon nests on flat branches of low conifer trees that without question had been used by these birds.”

Several Bonaparte’s gulls show how small they are next to a Caspian tern. Photo by Roy Lukes.

These small gulls tend to winter on Lakes Erie and Ontario eastward to Massachusetts and south to northern Mexico, Bermuda, Haiti and Cuba. There is always a good chance of seeing a few along the open water of Lake Michigan shores throughout a mild winter.

Mid-summer into early fall is a challenging and fun time to observe and identify the gulls and terns in their various plumages ranging from juvenile to adult. Fortunately much detail has been learned about the plumages of different age groups of the 25 species of gulls and 18 species of terns known to inhabit the U.S. at one time of the year or another.

A good field guide we use, especially for gulls and terns (and many other species) is the National Geographic Society’s Field Guide to the Birds of North America. Thomas R. Schultz of Fond du Lac, outstanding artist and birder, illustrated the section on Skuas, Jaegers, Gulls and Terns, 18 plates in all. Excellent details of the various plumages are emphasized in the plates, helping for easier identification of this fascinating group of birds.

Another excellent field guide with multiple photographs of each species is the Stokes Field Guide to the Birds of North America. Donald and Lillian Stokes are seasoned birders and have a number of field guides to their credit.

The rocky flats along the clear vistas of Lake Michigan offer an observer of nature beautiful scenes, including many showy wildflowers along with the exciting sights and sounds of water birds. A bonus will come to those fortunate enough to enjoy the flashy, talkative Bonaparte’s gulls. “Bon voyage” little Bonaparte’s!