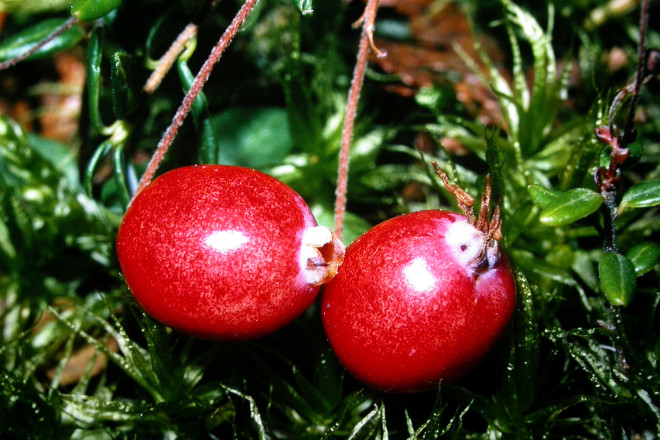 The ripe fruits of the Wild Cranberry are quite small. Photo by Roy Lukes.

There are few native plants with which I have had more fun through the years in my nature interpretation with people than the woody shrub the Native Americans called “sour berry” and the pilgrims nicknamed “ruby of the bog.” I point out the exquisitely small four-petaled pink flowers in June while informing the hikers, “Everyone in this group has eaten the fruit of these small evergreen shrubs.” Finally after giving my last hint – November – they all answer, “Cranberries!”

The wild Cranberry I am most familiar with is the Small, Small-fruited, or Northern Cranberry, Vaccinium oxycoccos. I also like another name, “fruit of the muskeg.” This reflects the North Country, home of this tart fruit.

Cranberries hide in quaking bogs and peat swamps, out-of-the-way habitats seldom visited by the average person, and consequently it is highly unlikely that anyone would ever serve you wild cranberry sauce. The pilgrims were presented with a goodwill offering of cranberries by the Indians. It is also thought to have been the first Native American fruit to be eaten in Europe. 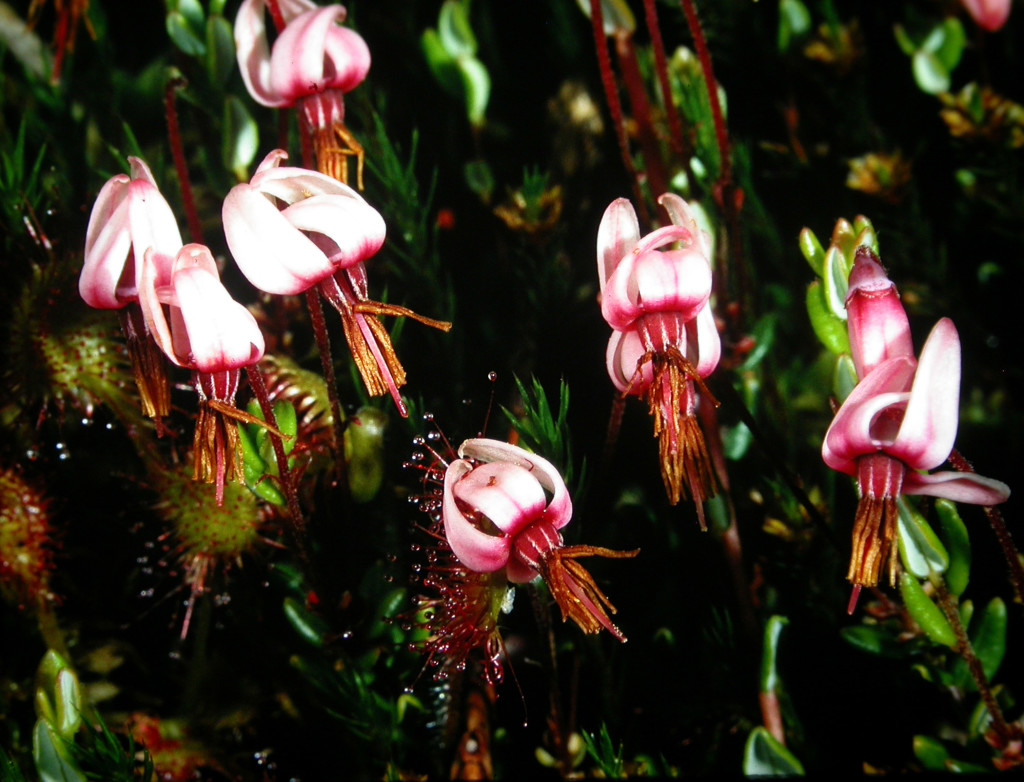 By September in past years we were frequently nibbling wild cranberries on some of our tours of the sanctuary. As a matter of fact most people don’t care for more than a very small taste. They are extremely sour and nearly inedible when raw, but are very pleasant when cooked. By the way, one teaspoonful of salt takes the place of half the sugar (a cupful) ordinarily used with a quart of cranberries.

Tart, indeed, is a good description of their taste, but add a little sweetening (Native Americans used maple sugar) and they become piquant, pleasantly tart having a lively charm.

Fruits of the Small Cranberry are about currant size, from one-quarter to one-third inch in diameter, often spotted with brown. The quarter-inch long leaves are pointed, dark green above and whitish below, and are evergreen. These creeping prostate shrubs surely have to be among the smallest, if not the smallest, woody evergreen shrubs in the United States.

A railroad crew years ago soon came to love old Johnnie Frog, an Ojibwe who lived in the Flambeau area. They never tired of hearing Johnnie pronounce cranberry pie in his native language. Unfortunately for Johnnie, the Ojibwes had no single word meaning pie so he had to interpret the concoction as “swamp berries made into sauce rolled between bread.” Little wonder those old railroad cronies had a good laugh whenever they could trick Johnnie Frog into saying it.

The Indians not only ate the berry, they learned that the steeped leaves produced a tea for a person ill with nausea, and the bitter and astringent leaves could also be used in treating diarrhea and diabetes as well as for purifying the blood. Hundreds of years of trial and error led the Indians to using various plants for medicines, which when tested by modern day pharmacists, proved to be about 65 percent accurate.

It is generally the Large or American Cranberry, Vaccinum macrocarpon, meaning large-fruited, which is commercially grown in the United States. Several varieties, such as McFarlin, Searis, Beckwirh, Stevens and Wilcox are planted. Fruits of the American are roughly twice or more the size of the Small Cranberry and range in color from pink to dark red, mottled with red and white.

I was teaching in Wisconsin Rapids in 1959, that terrible year for the cranberry growers there and elsewhere, when the U.S. Dept. of Health, Education and Welfare released information linking aminotriazole with cancer. This weed killer was occasionally used on the cranberry bogs then, and suddenly the growers couldn’t even give the fruit away. There were a lot of cranberry-less turkey dinners that year.

Another close relative of the Small and the American Cranberries is the Cowberry or Mountain Cranberry, also called the Lingonberry, Vaccinium vitis-idaea. Originally this fruit was called the Grape of Mt. Ida. It can be found in extreme northern Minnesota, the mountains of the Northeast, and especially on the Gaspé Peninsula and north shore of the Gulf of St. Lawrence.

Most of our Lingonberries are imported today from Newfoundland where they are called Partridgeberries, and from Norway where they are called “Lingon baer.” These fruits overwinter quite well and may be best in early spring. At least they shouldn’t be picked until the frost has mellowed them.

My summers for quite a few years were never complete until I had hiked to my favorite isolated Small Cranberry garden in what we call the “Big Marsh.” It is difficult to reach, but the show of thousands of pink flowers is well worth the challenge.

If you want to be rewarded a hundredfold go to the reference books, check a topographical map for your county, locate a cool inviting (mosquito-infested) bog and come to know the beauty and the haunts of the “sour berry.”

Come Thanksgiving Day, this delectable fruit will never have tasted so good. And I wager that hereafter you will not want to miss a single year of their flowering season. Piquant!