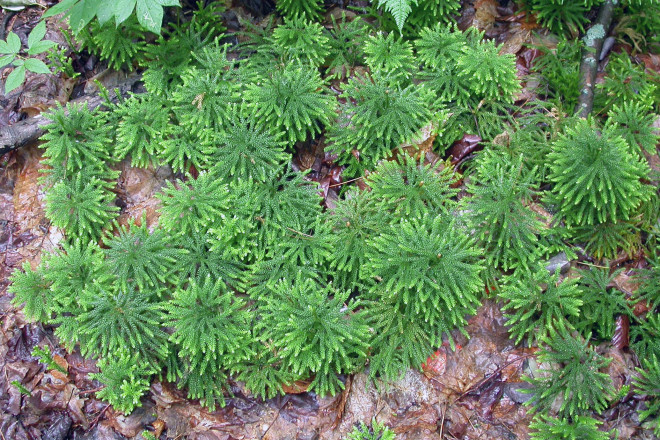 This cluster of Lycopodium obsurum has the common name of Ground Pine or Tree Clubmoss. Photo by Roy Lukes.

What else could it be but wishful thinking, sitting here at the kitchen table in the early hours browsing through Norman Fassett’s book Spring Flora of Wisconsin? Four 10- to 20-foot Hemlocks in our front yard add a small bit of rich green to an otherwise predominately gray and brown landscape. Several widely scattered clumps of Paper Birches add interesting contrast to the snowless scene.

It’s easy to appreciate the almost religious respect people of the olden days, dating back several centuries and more, had for native green plants during the desolate bleakness of winter. Imagine the civilizations that existed before the ages of iron and electricity, having to get along without metal stoves, window glass and dozens of everyday items we take for granted in our day-to-day living.

Sprigs of greenery decorating the interior of a dark, damp, drafty, cold house continuously gave a family reassurance that spring would come, the snow would melt, temperatures might warm, and soon green plants outdoors would mean good food and more pleasant living.

Aside from the red and green Christmas decorations of plastic, cloth or metal, what a welcome surprise people would be seeing in the woods on this snow-free day. Several hours of hiking, in addition to exercising muscles and filling lungs with fresh air, would reveal far more green plants than had been expected.

The 200 or more species of ferns native to North America north of Mexico include several that remain a brilliant green throughout much of winter and others that, even though quite leathery in texture, nevertheless are at least an olive-green color.

Many north slopes of hilly woods, cool and shaded in summer, have several species of “shield” ferns growing there, which retain their growing-season greens well into winter. For many years florists have cut tons of these ferns (following the growing season when the plants wouldn’t be damaged), put them into cold storage in late summer and used them during the winter when most greens, so important in their field of floral displays, were difficult and extremely expensive to obtain. 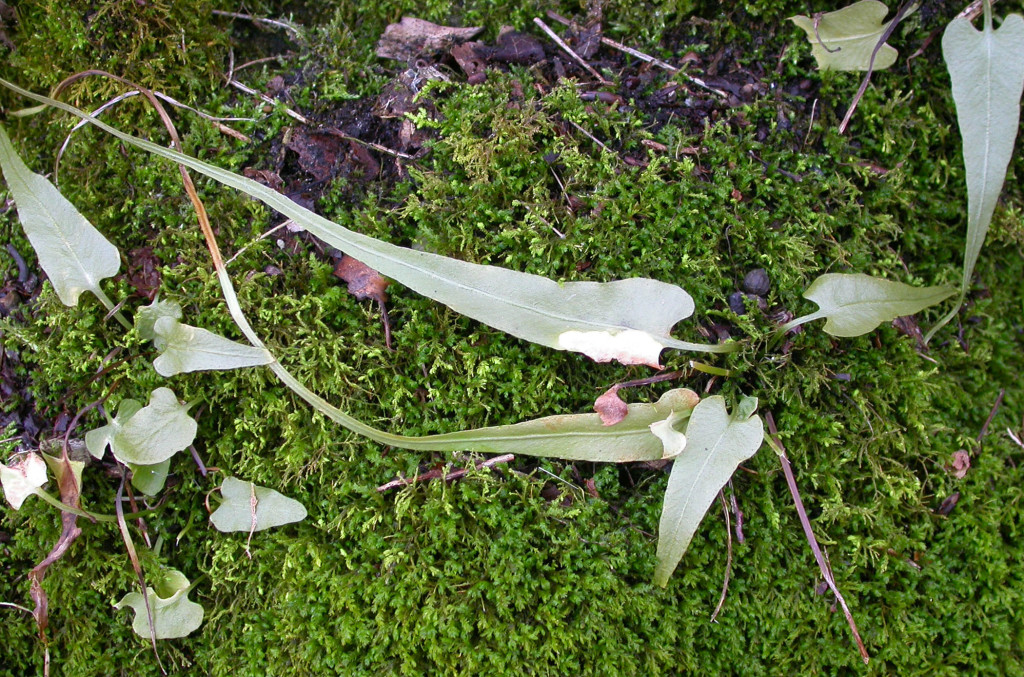 Three other ferns of this area, the “leathery” ones, are always exciting to locate in winter occasionally poking their greenish fronds above the snow. Rarest by all means is the Christmas Fern, known to exist sparingly in Door and Kewaunee Counties in northeastern Wisconsin. Its name was derived from the shape of its leaflets—resembling miniature Christmas stockings.

Dense stands of Polypody Ferns can be found growing in thin soil on top of shaded limestone boulders or bluffs usually fairly close to the shorelines. The other hardy fern displaying a lighter green at this season is the unusual Walking Fern, almost always found growing on moss-covered limestone rocks or outcroppings in a humid shady environment.

The Heath Family, which I was double-checking today in Fassett’s book, includes quite a few small, intricate, evergreen plants. Many are technically shrubs in spite of their tiny size. Included in this fascinating group are Wintergreen, Bearberry, both the Large and Small Wild Cranberries (more abundant in northeastern Wisconsin than you think!), Labrador Tea, Creeping Snowberry, Bog Rosemary, Pipsissewa, and Trailing Arbutus.

One of my favorite green plants of winter is the very small Goldthread, (Coptis trifolia). Its three tiny leaflets can be found by sweeping away the snow in many northern forests, especially on the margins of bogs.

Naturally the evergreen trees and shrubs are great favorites and take on special significance during the Christmas season, both indoors and outdoors. Simply from the standpoint of studying the distribution of native evergreens in Europe, the origin of many of our Christmas traditions, I assume that the most widely used Christmas tree for centuries there was the Norway Spruce (Picea abies – pronounced PIE-see-a A-bee-ees), a widespread evergreen of much of Europe. A good many stories tend to support the Balsam Fir (Abies balsamea) as “the” Christmas tree, but you will find that its distribution in much of Europe is very limited.

People of northeastern Wisconsin should be very appreciative of the variety and large number of native evergreen trees and shrubs. Included are the White Pine, Red Pine, White Spruce, Black Spruce, Balsam Fir, Hemlock, Arborvitae, Red Cedar, Common Juniper, Horizontal Juniper and Northern Yew (called Ground Hemlock by some people). To the west and north of our area grow the Jack Pines.

A couple other non-flowering plants provide greenery to the winter landscape. Walk into the more protected swamps of your area and you will be surprised at how vibrant and healthy various mosses and lichens are in this freezing weather. Another group that we can’t forget are the Lycopodiums, the “Princess Pine,” Ground Pine, Clubmoss, or whatever you wish to call them.

I must stray from my theme of native green plants of this season and mention a houseplant that surely has become a family favorite over the years in many homes, the Christmas Cactus (Zygocactus truncatus). One of our close friends for many years had one of the most spectacular specimens we’ve ever seen. Her green thumb and loving care had that large plant simply loaded with fiery pink blossoms somewhat resembling those on a Fuchsia plant.

Christmas greenery, whether they be native outdoor or cultivated indoor species, add immeasurably to this most important and exciting time of the year. And as occurred centuries ago, they also give one assurance that spring in its finery can’t be too far away!