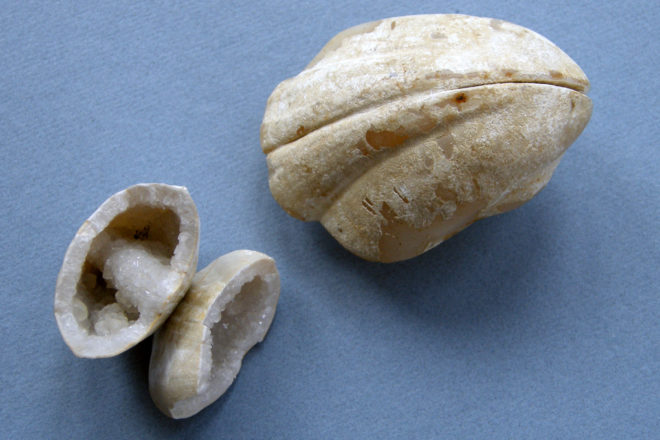 A large brachiopod fossil rests next to a small one that broke in half, showing the quartz crystals inside. Photo by Charlotte Lukes.

Sixty-four years ago this month I had an experience that triggered my interest in fossils. I was working during my college summer vacation for the Kewaunee Highway Department. My job was driving the old #5 Oshkosh truck hauling fill to a road-building site north of Luxemburg.

It was during a lunch break that, while looking at some rocks, I found my very first fossil in a piece of so-called limestone. All I can recall is that it was that of a shelled creature, either a brachiopod or a pelecypod.

Since that time my collection has grown considerably. Perhaps it was my maternal grandparents’ name of Skala, which in Bohemian means rock, that subconsciously kept nudging me toward the nearest quarry, gravel pit or rocky beach in the vicinity.

An excellent, highly fossiliferous stone quarry north of Cottage Grove (east of Madison) supplied me with hours of pleasure and many skinned knuckles. A few of my students from the Madison school where I taught, along with their parents, found cephalopod fossils that were nearly four feet long in that quarry on weekends. What a treasure house!

While firing with the Fort Sill army rifle team at a 4th Army match at Fort Hood, Texas, I lucked upon some shallow fossil-rich stone pits near the rifle range. I came home with several ammunition boxes filled with wonderful brachiopod fossils considerably younger than those we find in northeastern Wisconsin.

Professional geologists from whom I have learned, and whose teachings I believe, place the living creatures, whose fossils we find today in northeastern Wisconsin, during the mid-Silurian period of about 425 million years ago. An early tribe of people known as the Silures lived in western England and Wales where similar Silurian rock deposits exist.

Many species of fossilized creatures found in the North American areas of Silurian rock are identical to some found in Europe. One of my most treasured fossils, brought to me as a gift from England by friends Mike and Barb Madden, is that of a coiled cephalopod found in that country.

I believe in the theory of plate tectonics, Pangaea, and that Wisconsin during the Silurian period was located about 10 degrees south of the equator. This would put the State of Wisconsin at approximately the location of northern Brazil today. A tropical climate existed then and the area was a rich biome teeming with live corals, brachiopods, bryozoans, sponges, pelecypods and other warm water creatures.

Water temperatures there in the shallow Silurian Sea did not go below 68-70 degrees F. in order for the corals to grow and survive. It is thought that the corals of that time did not form hard growths unlike modern coral reefs, which can be very solid. They fell down easily and were overturned by waves.

At the close of the Ordovician Period, about 425 million years ago, and in the succeeding Silurian and Devonian Periods, Wisconsin remained submerged beneath the sea. The youngest rock at the surface in our state today is Devonian (Kenwood shale) along Lake Michigan in southeastern Wisconsin in the Milwaukee area.

Geologists visualize seeing our planet from outer space many years before people inhabited the Earth. Undoubtedly one of the visible landmarks is what is referred to as the Niagara Escarpment. Appearing like a gigantic bull’s eye target, it was formed as a massive coral reef brimming with life. One of the best places I know of to see this story unfold before your eyes is in The Third Planet exhibit at the Milwaukee Public Museum. What an astounding learning experience this is. The plate tectonic concept, the continuous shifting of continents and the replica of a portion of a coral reef as it existed here years ago are especially well done.

Naturally the fossil display was quite outstanding and captured my attention for a long time. I must admit (sorry to brag) that some of my Pentamerus brachiopod fossils are better than theirs. The many hours of searching for fossils in plowed fields and orchards on Sundays in late fall when most Americans are glued to watching football games on TV have paid off!

Returning to the Niagara Escarpment, which might also be referred to as a Silurian dolostone cuesta (kwes-ta), this rock formation forms the prominent northwest-facing escarpment in western New York State over which Niagara Falls flows. Technically it is not limestone but rather dolomite or “dolostone” made up of roughly 54 percent calcium carbonate and 46 percent magnesium carbonate.

Occasionally vugs are formed, small quartz crystal-lined cavities, in the dolostone caused by the little-understood process of dolomitization. What I have learned is that in certain parts of northeastern Wisconsin some of the fossils are composed of practically solid quartz and are things of rare beauty, like diamonds in the rough.

What rich geological history can be read in the landscape of this region. Summer weather has arrived and it’s time for fossil hunting!