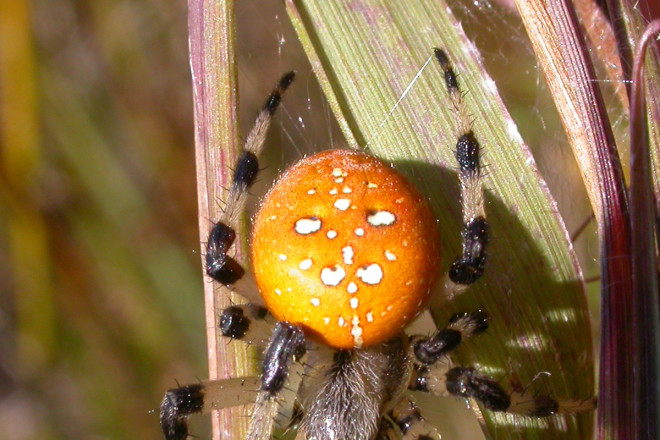 Even though people’s outdoor decorations related to the celebration of Halloween can’t compare with those of the Christmas season, nevertheless there occur some rather fascinating, albeit far-fetched concoctions devised for scaring passersby, or especially the little trick-or-treaters. Some feature enormous masses of gauzy spider web-like material draped over entire small trees or shrubs. Imagine how frightening an animated, oversized spider crawling around on those gigantic webs might be!

I happen to shy away from those items or actions that unnecessarily continue to accentuate the bad, scary and undesirable aspects of spiders. These invaluable creatures, genuine partners in nature, continue to be despised and mistreated by the great majority of humans largely due to poor education and upbringing.

I can recall my dislike for spiders as a child but as usual have not the slightest remembrance of why or where that feeling began. Chances are pretty good that Little Miss Muffet may have been responsible. My attitude toward these stealthy creatures, known to terrorize most humans, changed for the better when I began teaching. It soon became apparent that if I feared snakes, spiders and other “creepy-crawly” things so would most of my students. How could I expect them to develop tolerance, awareness and respect for all of nature without setting good examples for them?

Donald Culross Peattie, the famous naturalist-writer, said while observing an adult helping a child to watch a spider spinning a web, “If he [a child] learns admiration instead of disgust for the tiny spinner, he will have learned one of the greatest lessons in nature – that all life is sacred.”

It both amuses and bewilders me to see people, on the one hand, despise and want to kill every insect (invariably referred to as bugs) which they encounter, while on the other hand they go out of their way to also kill spiders intent on doing the same! You would have great difficulty in discovering better controllers of insect populations than spiders. One study, in favor of spiders, found that about 14,000 lived per acre on herbs, shrubs and trees of various woodlands in Illinois. And it has been said that the spiders in England and Wales eat about 22 trillion harmful insects annually. Perhaps we couldn’t survive without spiders!

Some of the more common spiders I’ve photographed and enjoyed at our place include the Long-jawed Orb Weaver, Yellow Garden Argiope (ar-JY-o-pee), several different kinds of jumping spiders and wolf spiders, Crab Spider, and the ornate Star-bellied Spider. 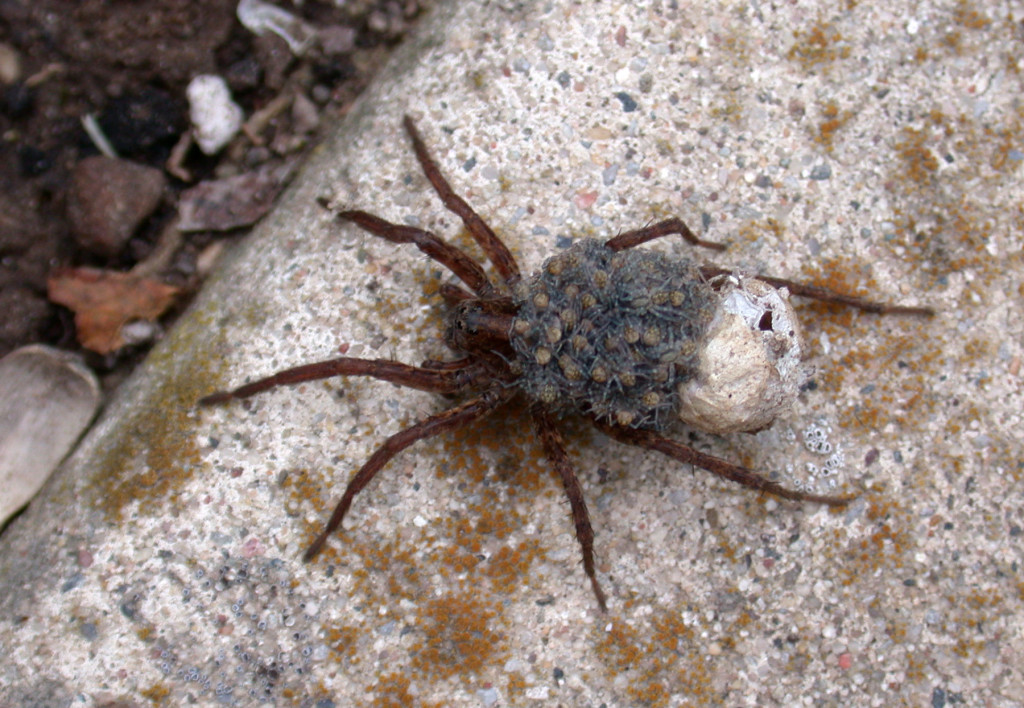 Early this morning, having returned to the house after feeding the birds, I noticed a large Wolf Spider sitting motionlessly on the floor. Apparently I had inadvertently transported it indoors attached to one of my shoes or trouser legs. It was my friend Emma Toft who taught me years ago to never kill a spider, believing it would bring bad luck. It was a simple matter, just as she might have done, for me to fetch one of the empty cottage cheese containers from Charlotte’s mushroom work table, quickly place the plastic carton, open-side downward over the spider, and then carefully slide a piece of paper beneath the spider, thereby easily capturing it. Now it was easy to take the captive outdoors and release it back into its preferred environment.

Have you had the good fortune to read the outstanding children’s (and adults’) classic, Charlotte’s Web by E.B. White? In the case you haven’t read it, please do. You’ll especially love this story if you grew up on a farm. Yes, we also have the children’s animated musical DVD Charlotte’s Web, as well as an intricately made Christmas tree ornament featuring a spider web fashioned of fine wire complete with Charlotte perched in the middle.

We’ve been fortunate to have had some excellent educational programs and field classes led by Dr. Michael Draney, University of Wisconsin – Green Bay professor of biology and one of the top spider experts in the Midwest. Around 20 of our Friends of Toft Point group were thoroughly inspired and taught to respect spiders during a field workshop at the Toft Point State Natural Area. Each participant was quickly taught how to use collecting equipment and we were absolutely amazed at the large number of spiders which were harmlessly captured, observed by all, accurately identified by Dr. Draney and then released back into the wild.

Our talented teacher told us that very few spiders of this area have strong enough fangs to penetrate human skin and that extremely few bites people receive, and which are blamed on spiders, are actually inflicted by spiders but can be traced to various insects.

Helped in the past by several of his students, Professor Draney has captured an incredible number of spider species at Toft Point, including one of the rarest in the Midwest, the far northern Labrador Orb Weaver, which is the first time it has ever been seen in Wisconsin. There is an excellent field guide to spiders, perhaps the finest in existence for our region, called Spiders of the North Woods by Larry Weber. This guide shows the Shamrock Orb Weaver, a very close relative to the Labrador Orb Weaver. Actually, according to Dr. Draney, the only way they can be told apart is by examining their genitals, accomplished by a very skilled arachnologist!

What good fortune my friend Nick Anderson and I once had while eradicating Phragmites at Toft Point, to come upon one of the Labrador Orb Weavers. Its large colorful abdomen reminded us somewhat of a miniature carved Halloween pumpkin. Surely it would serve as a fitting representative during this season of trick-or-treating.