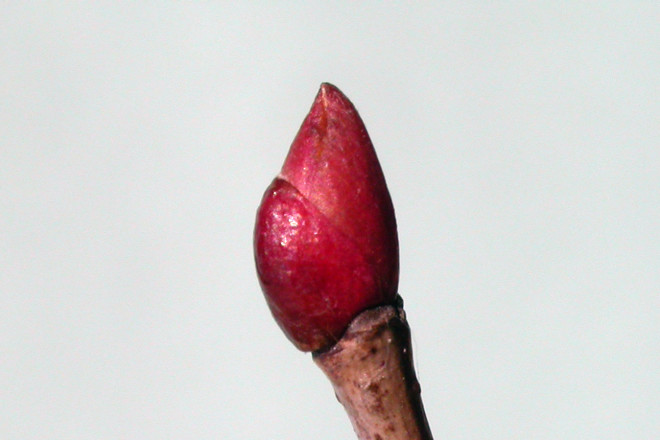 Today, the day of hearts and hugs, I remember the time Charlotte and I went on a long hike into the woods in search of the Valentine tree. Actually these trees of special interest were liberally scattered throughout the course of our outing. They grew within the deep woods, at the edges and along every fencerow in sight.

It really was the buds of the trees that interested us – their shapes, colors and unusual decorations. Those of the American basswood (Tilia americana) were the stars of the day in that they are large, red and quite heart-like in shape. Now you can understand why we call it the Valentine tree on Feb. 14.

Charlotte said that we were budding naturalists that day, and I replied, when showing her the red heart-shaped form of those on the basswood, “This bud’s for you!” One could add that the basswood wears its hearts on the ends of its twigs.

The day being clear, it was fun to scan the distant forested fencelines and enjoy the mixture of trees by their shapes. Sugar maples and basswoods were clearly the most abundant and easiest to identify.

A number of buds that were closely examined were adorned with fine silvery hairs, such as the exquisitely tiny and uncommon blue beech and the serviceberry. None, however, were nearly as fuzzy, like thick insulating fur coats, as the apple buds.

While looking at the buds it was natural that one would also pay attention to the leaf scars left behind when last fall’s leaves dropped from the trees. The new buds on nearly all trees are located directly above the leaf scars that often resemble miniature faces.

None of the buds we looked at could match those of the American beech for their length (some nearly one inch), streamline taper, rich tan color and the steep spiral placement of the individual bud scales. What a classic bud! 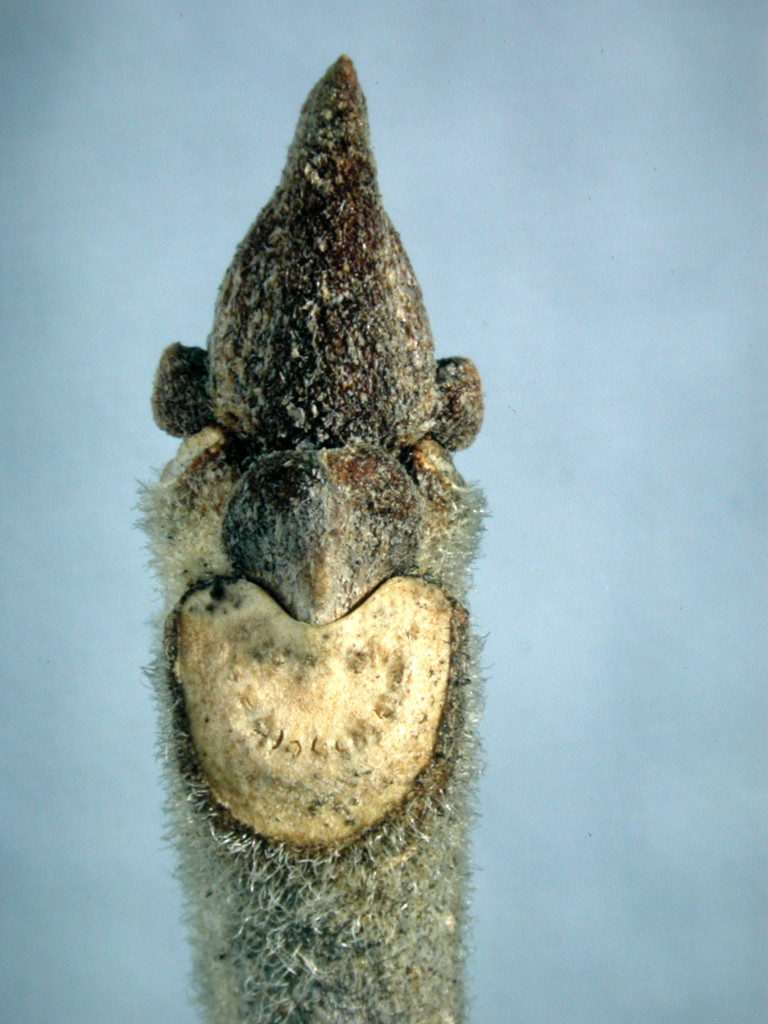 The black ash bud is our favorite funny face in nature. Photo by Roy Lukes.

Our favorite “funny face” was that of the black ash. Three individual buds blend into one another producing the facial features complete with a pointed cap. Accentuating the face is the large, open-mouth grin of last autumn’s leaf scar. The tiny raised dots included in the smiling pattern are the vascular tissue or “bundle” scars. These in a sense are the sealed-off tubes through which sap flowed to and from the leaves. The scar patterns vary considerably from one tree species to another.

Edward J. Steichen, famous photographer, said, “Once you really commence to see things, then you really commence to feel things.” I say this in that our budding hike that day was so remarkably enhanced because of our little hand lenses. Being somewhat of an idealist I like to visualize the properly equipped classroom including a hand lens and a good pair of binoculars for every student. How greatly the world’s environment would eventually benefit with the development of gentle, sensitive, caring observant people.

We are rather partial to the serviceberry tree, often referred to in this region as Juneberry, sugar plum, shadbush or shadblow. Its lovely tapering oval buds are a rich red-brown edged with fine silvery hairs. I couldn’t resist pruning a few twigs that we could force in water in our sunny south-facing dining room window. (The twigs were collected in our own woods.)

Close examination of the moosewood buds also revealed a fine fur coat covering. These buds will burst forth into delicate, drooping, tubular yellow blossoms early in spring, often before the maple syrup production has been completed. A small bouquet of them for forcing was gathered too, our way of beating spring to the punch.

A row of vases containing Canada buffaloberry, serviceberry, moosewood (also called leatherwood) and Canada balsam soaked up warmth and sunshine in our home. The buffaloberry and moosewood, both very early to flower in the wild, opened up well before the others. The Canada balsam emitted an ambrosious perfume that flowed into each adjoining room.

It’s amazing to realize that the buds one examines now were already formed by late August of the previous year, as many as six million of them on a mature American elm tree. Three things can be packed into the buds; they are the new leaves, flowers and twig elongations.

Nature is so miraculous in forming the tree buds several months in advance of their opening, her unfailing promise of the greening of spring to come.